Share All sharing options for: 2013 Prospects in Review: Right Field

To continue our off-season prospect coverage, today we'll start a position-by-position review of all domestic Rays affiliates. Each player will have some key stats listed, a recap of their seasons and include some scouting notes from different sources. Hopefully this can be a resource for prospect ranking season which will be on the way in coming months.

Right field had a variety of profiles in 2013. There was a superstar prospect, some low ceiling-higher probability players, and some upside too. Four of our top 30 prospects played in right field this year, obviously led by Wil Myers.

The typical right field profile prominently features three tools: hit, power and arm, but of course some players can break the mold. The list will start with players on the writers poll, and the rest will be listed alphabetically.

After a slow-ish start with Durham, Myers took off and looks to be the pick for American League Rookie of the Year. He did start the year with a 19 game on-base streak, but he hit only two home runs in that stretch and was getting a bit pull-happy. He cut down on his strikeouts and took off after that, hitting nine home runs and posting a 1.174 OPS in his last 20 games before being called up to the majors.

When he reached the majors, he had his struggles like any other rookie, but he also showed his impressive power to all fields and ability to use the b-hack when necessary. While the Rays have sometimes struggled to find complementary bats to go along with Evan Longoria, Myers got his career off to a very good start and could live up to the billing.

Vettleson failed to build on a solid 2012 with Bowling Green, and the reports now consider his potential more of an average regular than first division starter (BA, $). Defensively, he's pretty solid with a plus-plus arm, but with an average bat, his arm isn't going to carry him far.

In 121 games with Charlotte, he hit only four home runs, his last coming on June 24th. He was eighth in the league in doubles, and if he gets stronger and those start turning into home runs, he could get back to first division starter potential.

On a positive note, he was able to reduce his strikeout rate from over 20% the previous season. After stealing 20 bases in both of his first two professional seasons, he was a dismal five for 12 in stealing bases with Charlotte.

Mahtook played the last third of 2012 with Montgomery, and he returned there in 2013 and posted very similar numbers. His OPS was five points better, his walk rate was 0.9% higher, and his strikeout rate was 0.3% lower.

This was solidly above the league average, but he still can't shake the tweener profile of not enough power for a corner outfield spot and not enough range for center. Granted, he was bumped from center by two impressive defenders, Ty Morrison and Kevin Kiermaier, but scouts aren't optimistic that he has the tools to be more than a fourth outfielder (BA, $).

His base stealing is a plus, but with an average approach and struggles making contact, he could have trouble even becoming that.

After a lost season in 2012 due to injury, Guyer bounced back with a 2013 that was roughly in line with his previous two full seasons except for one major area: power.

His ISO dropped 52 points compared to 2011 with Durham, and he also only hit seven home runs. Perhaps this can be attributed to his season ending shoulder injury last year and a late-season finger injury this year.

Guyer was still solid in other areas though, especially his base running. He was actually better against right-handed pitchers this year, hitting for more power and drawing walks at a higher rate.

Although he did come back sooner than expected from his finger injury, the Rays preferred to keep him on the disabled list for late-season roster maneuvering than actually use him in baseball games. 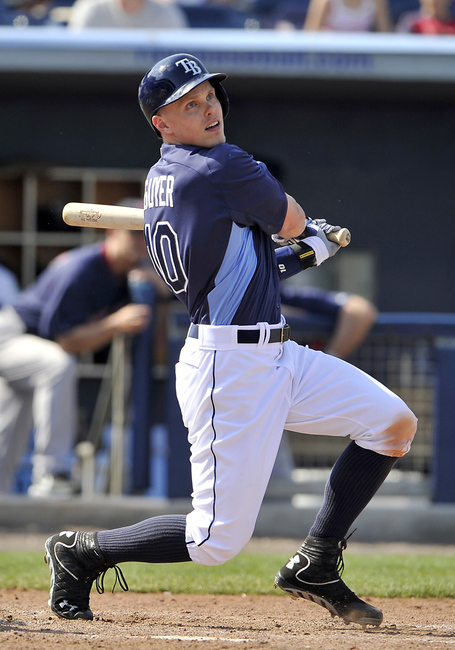 Araujo is still very young, but time may be running out for the franchise record holder for biggest bonus for a Dominican player. When he signed three years ago, he was advertised as a potential five tool player, but his statistics suggest he now has a completely different profile.

He has a more patient approach than most Latin signees, but his swing has not yet developed to make more consistent contact. At 6'0 and 190 pounds (after being listed as 6'3 when he signed), he's probably not going to fill out and add much more power.

Once billed as a good athlete that could stay in center field, he didn't play an inning there this season, and he only has 16 steals in 24 career attempts since 2011. It was also believed that his arm could land him in left field, but apparently it is good enough for right.

Like Araujo, Field is another player that didn't fit his profile as an amateur. Expected to move from center field to second base because of a below average arm, he instead played most of his games in right field.

Without any standout tools, he's going to have to make better contact to rise through the minors because effort and leadership can only take him so far. He was tied for the league lead in doubles with 20, and it could be worth something to point out that the New York Penn League is such a pitcher's league that his OPS was above the league average.

After being drafted by Arizona in 2007 and reaching Triple-A, the Diamondbacks released Frey in June.

The Rays picked him up after a month in which Durham lost Wil Myers to promotion and Jason Bourgeois and Rich Thompson to injury. He spent most of the rest of the season patrolling mainly right and center field with the Bulls, but he also had a small stint with Montgomery.

Frey was once considered a top 20 prospect with Arizona, but he was unable to make the difficult jump to Double-A and has been floating around in the upper minors since. He's patient at the plate and has good speed, but he's no longer making enough hard contact to effectively utilize that speed.

He will be a minor league free agent this off-season.

Although he wasn't on many draft radars, the Rays selected Hadley in the 24th round, and he quickly signed for $100,000, the maximum for a player drafted beyond the 10th round without counting against the budget. An average athlete with power potential, his professional career got off to a poor start with the GCL Rays. His .054 ISO showed that his power potential is just that, for now: potential.

As the walk and strikeout rates would both indicate, his game needs a lot of refinement, and there's not much doubt he'll be starting 2014 in extended spring training, ticketed for Princeton or even a return trip to the GCL. He does have the arm to play right field.

Rickard was a teammate of Field on not only Arizona's 2012 National Championship team, but also in high school. He's able to play center field with his solid athleticism, but he was relegated to right to accommodate the speedy Andrew Toles.

He doesn't have the power to profile there every day, but he could make the majors as a fourth or fifth outfielder. He's an effective base stealer with a patient approach is why he was a good fit batting at the top of Bowling Green's lineup for much of the year.

Like Field, Rickard is a grinder that's going to get the most out of his ability. He was old for the Midwest League, so he's going to have to show he can maintain this performance at higher levels.