Game 4's starter will be an interesting choice.

David Price and Alex Cobb have just delivered two stellar pitching performances this week, and proven they are each worthy of the title "Ace."

When Mike Axisa ranked the best 1-2 rotation punches, he named Tampa Bay's Price-Cobb combination third -- behind the Dodgers (Kershaw-Greinke) and Tigers (Scherzer-Sanchez), and ahead of the Red Sox (Lester-Buchholz).

As the Red Sox and Rays prepare for the ALDS in Boston, it's remarkable to consider how both team's rotations have struggled through pitcher injuries to reach the post-season today. Price's triceps, Cobb's horrifying concussion, and Buchholz's persistent neck injuries have kept the best each team has to offer off the mound -- but may have also given enough rest to keep each starter dominant.

The starters who will join Lester and Buchholz should be John Lackey, whose career was resurrected from the dead this season (3.52 ERA, 3.86 FIP, career low walk-rate, highest K-rate since 2006), and the recently acquired Jake Peavy.

The Rays will need to chose from Matt Moore, whose velocity has been plummeting since an elbow injury sidelined him in the month of August, rookie sensation Chris Archer, and fly-ball pitcher Jeremy Hellickson.

As for the first two games, the Rays have already made their choice:

David Price will be pitching on normal rest come Saturday, as will Alex Cobb on Monday. These also happen to be the dates of Games 2 and 3 of the ALDS. As far as who should get the nod in Game 1, Matt Moore is the obvious choice.

The confining space of Fenway Park is not ideal conditions for any flyball pitcher, and the choices of Hellickson and Moore are each sporting 40/40/20 GB/FB/LD rates this season. Chris Archer has a 47/34/19 batted ball split and pitched a complete game shutout his last appearance in Boston on Aug 22, but there's an even better advantage to consider: Moore is left handed, giving Moore an edge.

The Red Sox roster is an incredibly left-handed team, giving Matt Moore the natural advantage in splits; furthermore, it's not clear at this time what the Rays plan to do with Archer moving forward. In his rookie season, Archer is 5.2 IP from his career high of 134.1 IP in AA. He boasts an ERA and FIP in line with the best of the Rays starters (3.22, 4.07), but it would not surprise me to see the Rays harness his ability with his Fastball-Slider combination and have him available in relief. More on that shortly.

Meanwhile, starting Lester is less of Boston putting their best foot forward, and more-so rewarding consistency. In 33 games this season, Lester has pitched 213 innings, kept his walk-rate under control, and sported a value of 4.3 WAR. He's the team leader of the rotation, and he sports a decent advantage pitching in Fenway Park (3.09 Home ERA, 4.21 Road ERA).

By the way, remember the last time Moore pitched a Game 1? 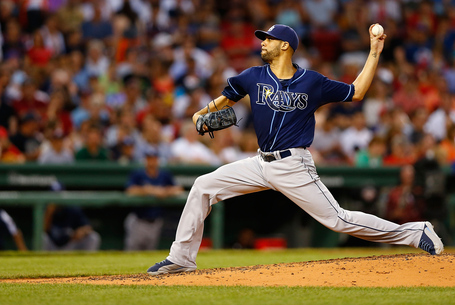 David Price also boasts the advantage of being left handed against the Red Sox, and again, will be pitching on normal rest. He also finds an edge in not having to pitch against an ace like Buchholz, giving the Rays a chance to stack up more runs.

John Lackey should not be pitching anywhere other than Boston for the rest of the season.

The Rays have faced Lacked twice this season, both times in Tropicana Field. Lackey pitched 4.1 and 5.2 innings in those appearances, allowing a combined nine runs, two home runs, two walks, and gathered five strikeouts. He then avoided the Rays lineup from June 10th until this Saturday.

It's entirely possible that Clay Buchholz may be the best starter that the Red Sox have. He's racked up an astonishing value of 3.2 WAR over just 16 starts scattered across the season. He averages 6.2 IP per start with a 23.1% strikeout rate, rarely gives up a longball, and has held batters below .200.

Even more intimidating, in limited appearances this season, Buchhy (can I call you Buchhy?) has fared better on the road.

Woah, check that FIP on the road -- Buchhy's stellar wOBA suggests his success away from Fenway is not just an illusion, but it's worth noting that regression is possible, and even likely away from his ballpark. In his career, Buchhy hasn't shown an advantage away from  Fenway, and in his two appearances against the Rays this season, Buchholz faired significantly worse in Tropicana Field.

All of that said, Buchholz is very, very good. Over the Monster has even made a Team-MVP case for his performance this season. In a possible elimination game (you know, if the Rays sweep Boston at Boston), he's the guy you'd want on the mound. 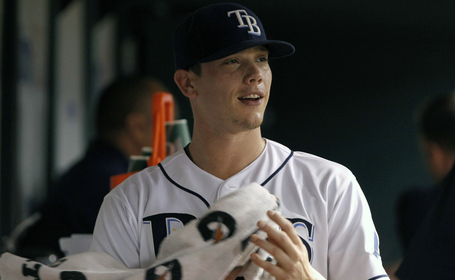 Because this is the playoffs, it's hard to map out what situation these teams will be in come Game 4. If the Red Sox are facing elimination, it's entirely possible that Jon Lester could start again on three day's rest, but Boston manager John Farrell has already announced his intention to roll with Peavy as his fourth starter, over Ryan Dempster or Felix Doubront.

Here is where the Rays face their most difficult rotation decision. Chris Archer is a Rookie of the Year candidate, and a valuable arm that may be reaching it's limit. Archer has not pitched more than 6.0 innings since August, including a 3.2 IP, nine hit performance at the Angels, only 4.0 IP in Seattle, and finishing his final two starts of the season with an early hook: 4.1 IP (albeit 7 K's) vs Baltimore, 2.1 IP his final start at Toronto.

The Rays have been mum on their intentions with Archer, but that's not a trend that boasts confidence. Archer has

The next best option might be Jeremy Hellickson (5.17 ERA, 4.22 FIP) who has been far better at home this season, and more so this year than usual. Helly had the reuptation of beating out his FIP with an extraordinary low ERA, but this season the trend finally reversed. That doesn't make him bad.

The same rule for Lester does not apply to Price. There will be only two days between Game 2 and 4, so Price will not be available until Game 5 back in Fenway -- and I'm okay with that.

David Price has been absolutely dominant in Fenway Park this season. In his first two starts after the All Star Break, bad weather caused David Price to make two consecutive starts in Boston due to some rescheduling, and he was lights out.

As far as predictions go, I'd give the Rays the edge in Games 2, 3 and 5, on the strength of the Rays' 1-2 punch of David Price and Alex Cobb. Of course, I would be overjoyed if the Rays could put things away early, but this will be a hard fought battle against a bitter rival. For this series to be anything less than down-to-the-wire would be contradictory to everything that's happened this season.

We'll dive into line ups and position players over the next two days. Let's go Rays!