Share All sharing options for: The Rays' Gold Glove Snub

The Rawlings Gold Glove awards were announced last night, and despite the entire infield being nominated, not a single Ray won. Cue outrage, cue disgust. Maybe. Gold glove voting is tough to figure.

That brings us to the stats. This year, the voters were given a packet of advanced stats on the nominees for their perusal. Without getting into the problems with these stats in this particular sample size, and noting the absurdity of giving Joe Maddon a chart showing DRS when we know he and many other managers have access to more advanced but proprietary metrics that are based on superior data, this is a good development. But it's still problematic, especially in today's game, which is dominated by shifts. 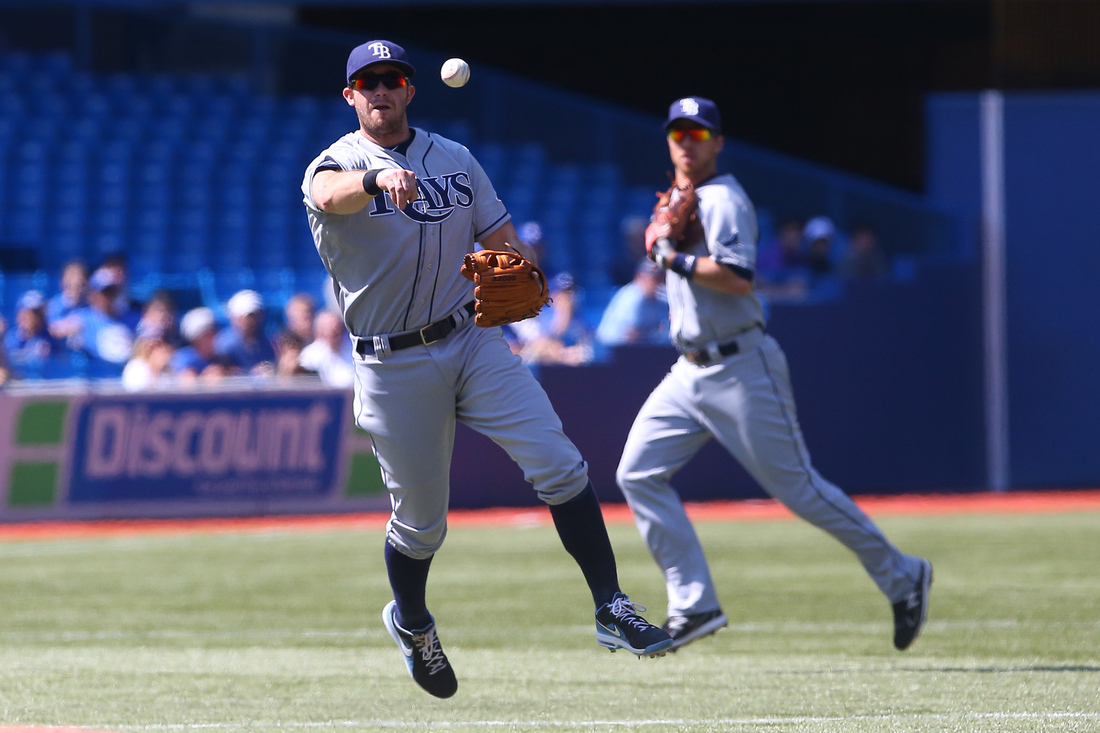 I know that each defensive metric has its ways of dealing with shifts, and I'm not here to debate them; however, they're still a problem for Gold Glove voters. Here's why:

Every play a fielder makes is a combination of his range, his hands, the strength and accuracy of his arm, and his positioning. Some positioning credit has to go to the players (like when a great, rangey center fielder can play shallow), but some has to go to the managers as well.

Nowadays, extreme shifts, with the third baseman on the first-base side of second base are commonplace, but focusing on them exclusively obscures all the nuance of modern positioning. Every batter/pitcher matchup is scouted, and players will even adjust their position within an at bat, depending on count. That's not just the fielder being wily, that's the team. Using stats, though, it's very difficult to separate the two.

Should managers be given a gold glove award? Probably.

To separate the players from their managers and front offices, we need to use our eyes, but as I've already said, the voters will only be well-versed in their own players (just like us fans).

Luckily, there's a simple way to figure out who the good fielders are, even in this crazy, shifting world: Ignore individual results and look at the team as a whole.

When a ball is put in play, it will either become an out or a hit. If we don't care who to give credit to, we can forget slicing the field into zones and just look at defensive efficiency. Baseball Prospectus will even park-adjust that number for you, and call it PADE. It's a simple stat, that's nearly impossible to argue with. Teams that have a high PADE likely have smart managers and/or a lot of good fielders. Teams that have a low PADE are missing one or both.

The Oakland Athletics led MLB in Park Adjusted Defensive Efficiency last season, yet only had two players nominated for Gold Gloves, and neither of them won. That's a snub.

The Rays were third overall, and had their entire infield nominated, but didn't win any Gold Gloves. Probably a snub (depends on who beat them out—it's possible to have a great infield made up of the four second-best infielders in the AL).

Boston was below average, but won two. Double hmm.

By that overhead look, I think it's pretty clear that the Rays were snubbed (and that Oakland was snubbed more), but let's take a quick look at each individual position. 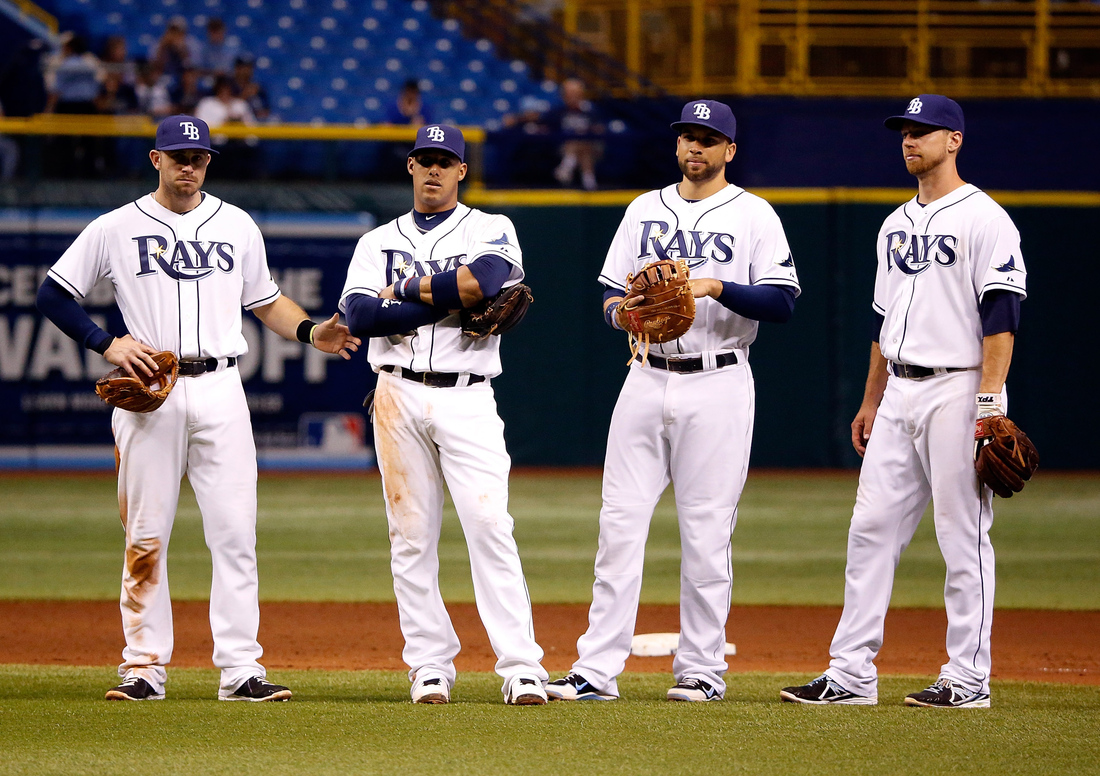 Evan Longoria is a great fielding third baseman, who has won Gold Gloves in the past and will win them in the future, but Manny Machado was a top shortstop playing out of position at third base. In fact, he may have been the top shortstop if he was able to play his home position. He recorded 31.5 runs saved above average according to UZR.

The positional adjustment between shortstop and third base is about five runs per 600 PAs, so let's be super conservative and say that Machado would have been a twenty-run shortstop. That would be nearly ten runs better than either Alcides Escobar or Yunel Escobar, two shortstops up for the award. And Machado passed the eye test in every game I saw. He's not the reason Baltimore was only an average team defensively. He deserves his award.

That brings us to J.J. Hardy, the second best shortstop on his team. Given what we know about Baltimore's total defensive output (average), and given what we know about what Machado was giving them (way above average), and given Hardy's inferior stats (6.0 UZR, roughly half that of either Escobar) I'm pretty comfortable saying that Hardy doesn't deserve his award. It should have been an Escobar.

Whatever. Ben Zobrist never gets any respect.

I suppose that Dustin Pedroia, who won, is pretty good too, but given that the Rays were a far better defensive team overall than the Red Sox, I'd have given the nod to Zorilla. What is second base except for an easier version of shortstop? Has Pedroia ever filled in at shortstop in a pinch? No. Can he? I don't know, but I know that Zobrist can. Not worth getting upset over, though.

This is the one that sticks in my craw.

Of the first basemen up for the award (meaning not counting Mike Napoli, a converted catcher who put up great defensive stats this year) James Loney's numbers were the best in the AL. And boy did he pass the eye test.

We Rays fans have seen a number of fine defensive first basemen. Both Carlos Pena in his prime (he won a gold glove), and Casey Kotchman were very good, but Loney was on a different level than either of them. His decision making was perfect (think about the double plays he started, and the runners he held in the ALCS). His scoops were sublime (credit him for Escobar's error-less streak). And he had range.

I remember a twitter conversation with Toby David early on this season, when Loney dove and tipped (but couldn't field) a grounder that would have been a routine out had he let it go to the second baseman. David claimed that Loney was known for this, and needed to know when to let one go. That may be true, but there's another way of looking at it. If your first baseman is routinely stealing ground balls from your second baseman, then you're positioning your fielders wrong. Just move Zobrist over so he can cover the middle better.

Too often, I think that first basemen get evaluated purely on their ability to scoop, while their (lack of) range is ignored. Loney can field his position, but he's not rooted to it.

I don't feel competent to claim that Eric Hosmer doesn't deserve his gold glove, but I can say this: James Loney is the best fielding first baseman we've had in Tampa Bay for awhile, and he's a big reason the Rays were second best in the AL at turning hits into outs.

So there you have it.

Were the Rays snubbed? Yes. Is my anger lukewarm? Yeah, it is.

Fielding is too complex to fit neatly into a series of individual awards. It's enough to know that this season, the Rays were very, very good.