A bearded zombie clan of hungover men have invaded the Northeast, obnoxiously rioting in the streets and rambling about oddly colored socks. Halloween is weird, ya'll.

Share All sharing options for: The Rays Tank: Happy Offseason

In exactly five months the Rays will open up the 2014 season against the Blue Jays at Tropicana Field.

- The history of baseball, entitled Árbol de Béisbol, in a really, really cool interactive and unique graphic by Craig Robinson of FlipFlopFlyin.com.

- There was a thought provoking piece in The New Yorker by Adrian Cardenas, a former Cubs prospect who quit baseball last year at the age of 24, which proposed some takes on the sport that most of us probably haven't thought about.

- Hardball Times took a look at pitches seen by hitters, and questioned whether offensive performance improves on each additional pitch seen; and if repeat views of types of pitches help a batter.

- There's a FanPost up by Robert Cochrane, who went with his dad, who has Parkinson's Disease, to all 30 ballparks in 2004, filmed in a documentary. They're currently raising money for round two of the tour, and are seeking your help.

- A Reddit user put together an infographic of the World Series vs. the highest rated TV show of that year.

- Entirely not baseball related, but the New Orleans Pelicans mascot will give you nightmares. Happy Halloween. 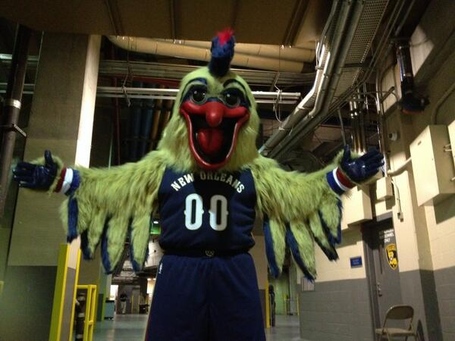