Yesterday, after much discussion of the matter on this site, Matt Joyce finally got a chance. He did not handle it well. Doubtless, many of you simply took it as evidence that Joyce was in a bad slump, that Joe Maddon was right to sit him (and should have kept sitting him), and that I, along with several other site writers and vocal commenters have my head stuck in the sand (or somewhere else if you prefer).

That's okay, but let's examine each of Joyce's at bats from yesterday.

The Line Drive (bottom two, none on, two outs) 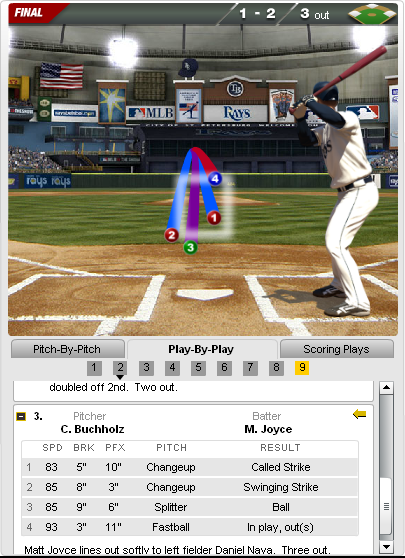 On the first pitch, I assume Joyce was looking fastball. Instead he got a changeup, so he took it. The second pitch was a pitcher's pitch, another changeup down and away, right on the black. Joyce swung but that's not the type of pitch that gets hit very often. Clay Buchholz went back to the offspeed in much the same spot, but his pitch was a little bit low this time and Joyce correctly took it. After setting him up down and away with the slow stuff, Buchholz figured he could get Joyce up and in with a fastball. Not so. Joyce made contact, although it was a soft flair into left field.

Still, is a line drive the other way evidence that a hitter is "lost?" 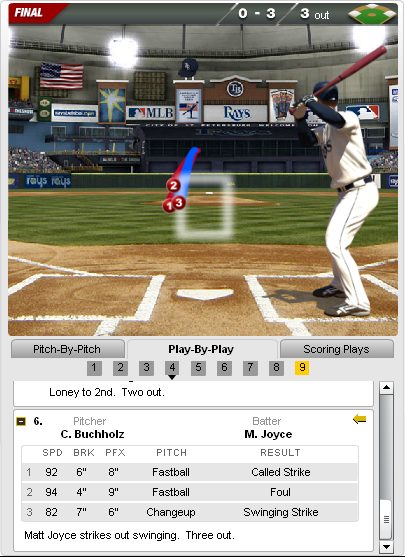 The next time Matt Joyce came to the plate was a bit more important. A Ben Zobrist walk, a James Loney single, and a Desmond Jennings walk had loaded the bases, but Evan Longoria and Wil Myers had struck out earlier in the inning. Against the righty-masher, Clay Buchholz was on the ropes but he came up big. First was a fastball outside. It was well outside, clearly a ball. I don't think that home plate umpire Dana DeMuth had a very good night, although neither do I think he favored one team over the other. Still, one can see Buchholz's strategy and Joyce's dilemma. After the first strike call, Buchholz went out there again, but a little bit higher. I'm sure Joyce would have loved to take the pitch, but DeMuth had told him that he needed to swing at it, so he did (and whiffed).

Now Buchholz could do anything, but what he did was pretty slick. He went back to the outside of the plate, but this time with a a changeup. Joyce was leaning out, ready to protect and ready to hack. He probably thought he had the measure of Buchholz's fastball by chance number three, but he was way out in front of the change. With some help from the umpire, it's a dominant sequence. You can knock Joyce for it if you want, but give credit to Buchholz as well.

Overeager (bottom six, none on, no outs) 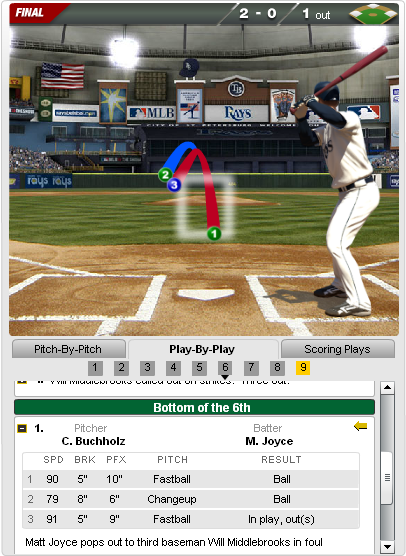 Joyce was up 2-0 after receiving a little bit of help from Dana DeMuth the third time around. Then he swung at a borderline fastball up and away. Not a good decision.

The Bunt (bottom seven, two on, no outs)

With two on and no outs, late in the game against the lefty Franklin Morales, Joyce was asked to bunt. He could not. Instead he lined out to third base. It's annoying that Joyce can't bunt, and it's annoying that Joe Maddon asked a slugger, unused to bunting, to do so in a big spot. But does this really tell us anything about Matt Joyce's ability to swing the bat right now?

Why I'm Doubling Down

One bad game changes nothing. Adding one game to a cold streak changes nothing. We know this when looking at stats. But it's tempting to watch a game, with full knowledge of a cold streak and think that we're seeing horrible mechanics, a messed up head, or a lack of confidence—qualitative reasons that the run of poor results must certainly continue—even when all we're seeing is baseball. It's not good analysis, but it's very human.

I think that yesterday we all witnessed a decent at bat that didn't turn out well, a spate of dominance by a good pitcher (with an assist from the umpire), one ill-advised swing, and a slugger who can't bunt. If you thought that Joyce was the play against lefties yesterday, I see no reason to take a different tact today.

Screenshots of pitching sequences are from mlb.com's gameday.