Share All sharing options for: The 2013 Post-Season in Review: Part 1

Allow this retrospective to take you back through the Rays' post season journey.

The Rays hit their stride after a hard fought series in Tampa Bay against a formidable Boston team. The first game had been a 2-0 shutout performance by Clay Buchholz on his return from the disabled list, and Price had done his best with a complete game, two run performance. The second game had been a loss in extra innings, with the Rays unable to beat Red Sox closer Koji Uehara.

The third game was a win, however, when Evan Longoria and Wil Myers doubled off Boston prospect Rubby De La Rosa as the game pushed into its final innings. It would be enough, the Rays held on to win 4-3.

It was Wednesday, September 11, and it was the beginning of the Rays playoff push.

The weekend series went on the road in Minnesota where the Rays took two of three, and then came home to face the Texas Rangers and Baltimore Orioles, each vying for a place in the wild card play-in game.

The Rays split the series with Texas. Alex Cobb out dueled Matt Garza in game one, Alexi Ogando shut down the offense in game two, the Rays won in extras for game three, and then fell victim to Yu Darvish in game four.

Tampa Bay would win the next seven games, dismantling the hopes and dreams of the Baltimore Orioles, a series that saw Manny Machado blow out his knee running to first in the fourth game, and the Rays wen on the road and swept the New York Yankees in their own house, including two shut outs on the strength of Moore and Cobb. The other win belonged to David Price.

By this time the Rays knew one more win and they moved on, two and it was a guarantee, but Toronto stood in the way. R.A. Dickey pitched like a Cy Young winning in game one, and J.A. Happ exacted revenge, handing the Rays their first consecutive losses since the Boston series mentioned above and dropping the Rays into a tie with Texas.

The Rays tore it open. The offense was immaculate, posting six runs on Toronto in the first inning, and an insurance run in the fourth when Wil Myers doubled deep into left field to score Yunel Escobar.

But nothing can be easy, and the Blue Jays crept back in. After a swinging strike out, Matt Moore allowed two singles and a double, scoring two. He was lifted for Jake McGee who allowed one run on a sac fly too deep in right, recorded two outs, then allowed three base runners and another score.

Joel Peralta relieved McGee and walked the next hitter Sierra, leading Joe Maddon to explode in frustration. He was ejected, and Peralta got the double play. Peralta returned for the eighth and after a walk and two outs (including a swinging strike out), a single put two on, and Rodney was called in.

Rodney was barely any help either, allowing two singles to score two runs and then walking the bases loaded, but he was still the best the Rays had. He stayed in, and he struck out Sierra swinging. Then in the ninth, it was a single to Adam Lind, a fielder's choice to first, a swinging strikeout, and thankfully a line out to left field.

The Rays survived, and kept their tie with Texas. 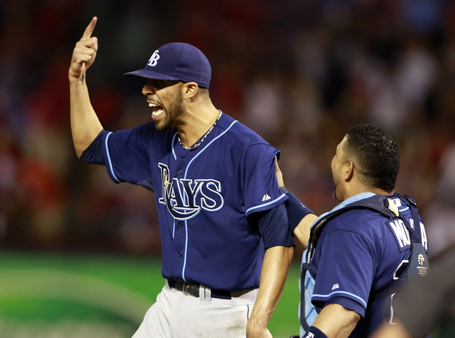 The Rays put their best pitcher on the mound, and he delivered. David Price was forcing groundouts in all but one inning, totaling fourteen in the outing, combined with four strikeouts and limiting the Rangers to a mere two runs in Arlington.

The classic defense that has defined this club was on display, particularly by solid work from Yunel Escobar, and it was to him Price pointed and shouted "That's what I'm talking about!" before turning and embracing Evan Longoria.

As the players swarmed in on Arlington's mound to celebrate Price's complete game performance, which rather importantly had spared the bullpen, Price told Longoria  how he had dreamed about this very moment. Being the ace: the complete game, the celebration, the post season achieved.

Price had put to rest his demons of facing Texas, and it was bliss. 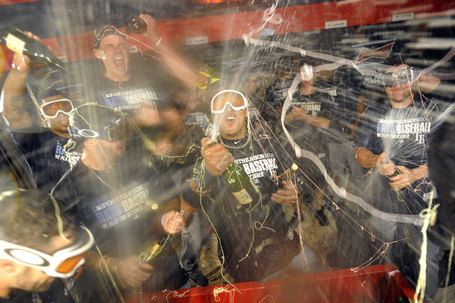 Cleveland wouldn't score a run. Alex Cobb pitched around trouble for one out shy of seven solid innings, allowing eight hits and a walk, but stranding them all while striking out five. Peralta pitched a clean inning of relief, McGee finished the eighth with a strike out, and Fernando Rodney struck out two of his own in a ninth inning save that went as it was supposed to.

This game could have been Cleveland's, who were led by rookie starter Danny Salazar and his 100 MPH fastball, but shortly into the game -- after dominating the best of the Rays line up -- he lost control on a fastball that soared up and in on Delmon Young. The Rays redemption project was never expected to play this game, but Maddon favored his intangibles over the numbers that suggested Matt Joyce was the best option, and Delmon turned on it, burying the errant pitch in left field and shaking Salazar's confidence.

From there, the rookie went to the offspeed stuff, and would allow two more runs in the fourth before getting lifted at the start of the fifth. From there, only the Rays would score again as the team batted around in the ninth. A string of bullpen appearances by both teams generally kept each other in check, and the game felt thankfully anti-climactic. There had been so much drama. To have anything come easily was a gift.

Stepping back, it's unbelievable.

The Rays did it on the road again, in a third elimination game, and it was on to Boston for the American League Divisional Series... 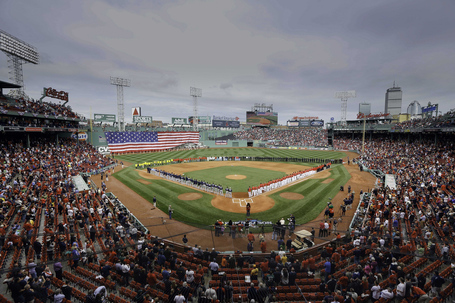