2013 Prospects in Review: Third Base

Share All sharing options for: 2013 Prospects in Review: Third Base

Today, I'll continue with the position players, but we'll give you a break from them and do some pitchers shortly.

One last corner position before we move on. Like first base, it's usually the bat and power tools that carry a prospect here, but arm strength is vital too. The run tool isn't particularly important, but quick feet and reactions are an important part of the field tool.

The Rays had two third base prospects in the top 30 this season, both of which are former first round picks. Both players were probably average at best but will probably remain among the organization's position player prospects. With Evan Longoria, if any of these players make the majors, it seems likely that it'll be at a different position.

Shaffer damaged his stock in 2013 with a season that was barely better than the Florida State League average. Billed as a polished college hitter prepared to succeed at this level, he struggled making contact for most of the season. Maybe part of that can be attributed to radical changes to his swing that he attempted to make, but except for one especially hot month of July, the results were mostly the same throughout the season.

Going back to the Arizona Fall League for the second straight off-season, Shaffer's results have gotten better. As of writing this, he has more walks than strikeouts like he did at Clemson. He's batting .273, but the potential plus-plus power has not been evident with his .341 SLG. Extracting meaningful information from AFL stats can be an exercise in futility, but it's still encouraging that he didn't completely tank. Maybe he can build on that success next year which he didn't in 2013.

Goeddel repeating the Midwest League was a bit of a surprise to me, and it was also a surprise that he didn't perform any better. In fact, his performance on the surface was incredibly similar. He batted three points higher, and his OPS was five points lower (the league average OPS dipped two points.) He stole 30 bases in 35 opportunities in both seasons. His walk rate dipped from 10% to a still acceptable 8%, and he cut his strikeouts down to a more reasonable 19.7%. His power was a little better too, largely due to hitting 10 more triples.

Early in the season, Goeddel even played a few games at shortstop, but he didn't have any during the last three months of the season. He's athletic enough to play positions besides third base, but the Rays seem pretty content to keep him at the hot corner. That athleticism is why some scouts still remain optimistic (BA, $) despite his stagnant statistics this year. He'll get a shot in the FSL next season, and the Rays hope he continues getting stronger and gains some power.

Figueroa continued plugging away with Durham in 2013 after spending the second half of 2012 there. His OPS clearly isn't impressive because he has almost no power, but Joe Maddon sees a big league future for him. He has more walks than strikeouts in his career, and he nearly had twice as many walks as strikeouts this year. He makes up for his lack of power by doing whatever it takes to get on base. Every cliche that's ever uttered about a player lacking tools probably applies to Figueroa. He'll get the most out of his ability.

How much ability he has is the question. After finishing last season in Triple-A, he was left unprotected in the Rule 5 draft and wasn't taken. To me, a player that can play every infield position and get on base should get a look on an ML roster. The Rays will decide again if they want to ensure he stays in the organization by putting him on the 40 man roster, or if they'll let other teams get another chance to take him.

Despite only being 5'7 and 175 pounds, the undrafted free agent Garcia played mostly third base for Princeton. His power, while a bit surprising for someone his size, isn't enough for him to stay at third base. He had a bit too much swing and miss in his bat, but he did draw his fair share of walks. That said, he still finished the year with the average Appy League OPS on the nose.

For the third straight year, the Rays signed their final pick in the draft. In this case, it was Henley in the 40th round. The Azusa Pacific infielder, the same college of post-season hero Stephen Vogt, struggled in his debut splitting time between second and third base. He clearly didn't strike out much in his limited action, but he didn't draw many walks or make hard contact very often. He was released by the Rays last month.

Coming out of the baseball hotbed that is Embry-Riddle in Daytona Beach, Kline produced a solid season in 2012 with the GCL Rays, albeit with a .385 BABIP. The hits weren't dropping in this year though, and he struggled in limited duty across three levels. The Rays bounced him around with his versatility, and he played all corner positions plus second base and pitcher at points in 2013. He's a singles hitter with no power or base stealing ability, making his upside very limited. He was traded to the White Sox in the Jesse Crain deal. 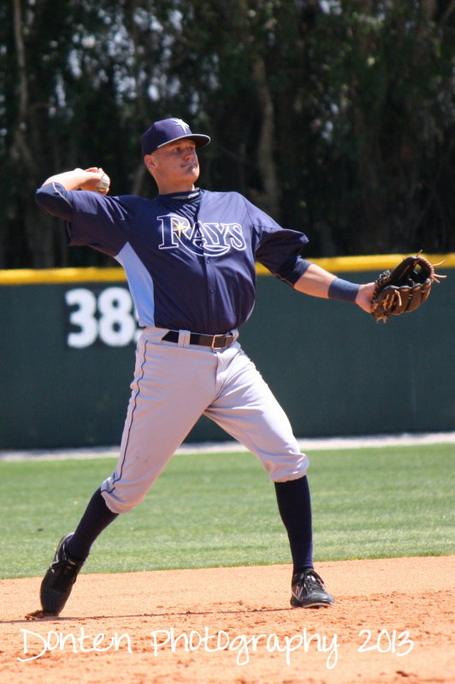 Ben Kline won't be wearing this uniform next spring

At 6'0 and 235 pounds, Montes doesn't fit the mold of a traditional third baseman, but he played almost all of his innings in the field there in the GCL. The Rays have now drafted him twice, so either he's related to someone in the organization, or the area scout in southern California likes something about Montes. His plate approach seemed decent enough in 89 plate appearances, but with his size, his bat is going to have to be a lot better with his lack of athleticism.

After six years in the organization, the Rays released Sexton in May. In parts of four seasons with Montgomery, he owned a .661 OPS, and his lack of flexibility and power prevented him from advancing any further. He put the ball in play a lot with a low strikeout rate, but the contact wasn't hard enough consistently to even produce gap power.

Torrez was drafted out of Arizona State in the fourth round two years ago, but he's struggled on the accelerated track the Rays put him on. Although his performance with Montgomery this year was better than his performance with Charlotte the previous season, his strikeout and walk rates were both roughly the same, and the only clear difference was a 33 point jump in BABIP.

Torrez plays the game hard, but his lack of tools is amplified by playing at levels higher than he was maybe ready for. His performance at Arizona State as an amateur indicated he would be able to play a little middle infield as a pro, but he hasn't taken the field at a position besides third base so far.

Being really disappointed in a seventh round pick may be a stretch, but Young failed to show many of the qualities in his pro debut that made him such a good player at Louisville. An athletic and high on-base player with the Cardinals, he wasn't able to make as much contact and get the ball in the gaps with the Renegades in his debut.

His strikeout rate in his sophomore and junior years with Louisville was just 13.6%, and he was much more inefficient stealing bases. Players have bounced back from poor pro debuts in a pitchers league like the NYPL, but this season was a negative.