Wil Myers and rookie of the year regression

Or why the award is not indicative of future performance.

Share All sharing options for: Wil Myers and rookie of the year regression

Wil Myers won the Rookie of the Year Award, which, arbitration costs aside, is a good thing. It means that Wil Myers had a good season, and that Wil Myers is a good baseball player. Myers will be only 23 next year, and hasn't yet entered his prime. The future is bright. It's only uphill from here, right?

Here is the average career fWAR of all Rookies of the Year since the awards was first given in 1947, through the first 13 years of their career: 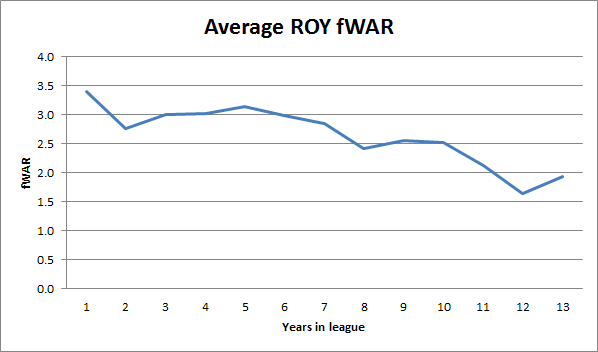 Actually this is over-representing the players' success. My averages don't count the empty seasons from the players whose careers ended early against the group.

For example, Kazuhiro Sasaki only played in MLB for four seasons. His fifth season is not counted in the denominator of the average, when in reality it might be more correct to count it as a season in which he produced 0 WAR. Even with that statistical handicap, the results may surprise you.

As a group, the RoYs performed best in their rookie season.

How can this be? Why are our brightest young stars doomed to failure?

What would you say if I declared my intention to make the same graph of players who had won the MVP, and lined up their MVP seasons in the middle? You would tell me not to waste my time because it's obvious how it would look. There would be a mountain in the center with steep slopes to either side. That's because an MVP season is usually a player's career year.

The same principle is operating on the RoY graph, but it seems less obvious because time isn't being manipulated in quite the same way, and because we expect young players to improve. A lot has to go right for a player to be the best of his rookie class. He has to be injury free, he has to be in a good situation with his team, and he probably has to be lucky. You shouldn't count on everything lining up each year.

Even if all the winners were to improve, there's no reason to think that they will improve linearly. We know that year one is good, but maybe half the players take a step back in year two and regain their form in year three, while the other half do the reverse. That would make it look like no one improved.

So, let's remove some of the statistical tricks and take a look at how many of the Rookie of the Year award winners were able to best their initial performance at some other point in their career.

Of the 132 winners, 32 (a plurality) never replicated their debut performance, and thirty only did so once. A majority (72) topped their rookie year two times or less.

So the lesson is clear: Regression's a bitch; however, there's another, more hopeful and nuanced lesson in the data. I stopped my graph at year 13 for a reason. If I had continued on to year 14, you would have seen something strange. In year 14, the average WAR was 3.6 — greater than the average of any other year, including the award-winning rookie season. When you look at the raw data it's obvious why.

And that's why it's okay to be excited about Wil Myers, despite the wet blanket that an understanding of regression throws on any and all accomplishments. 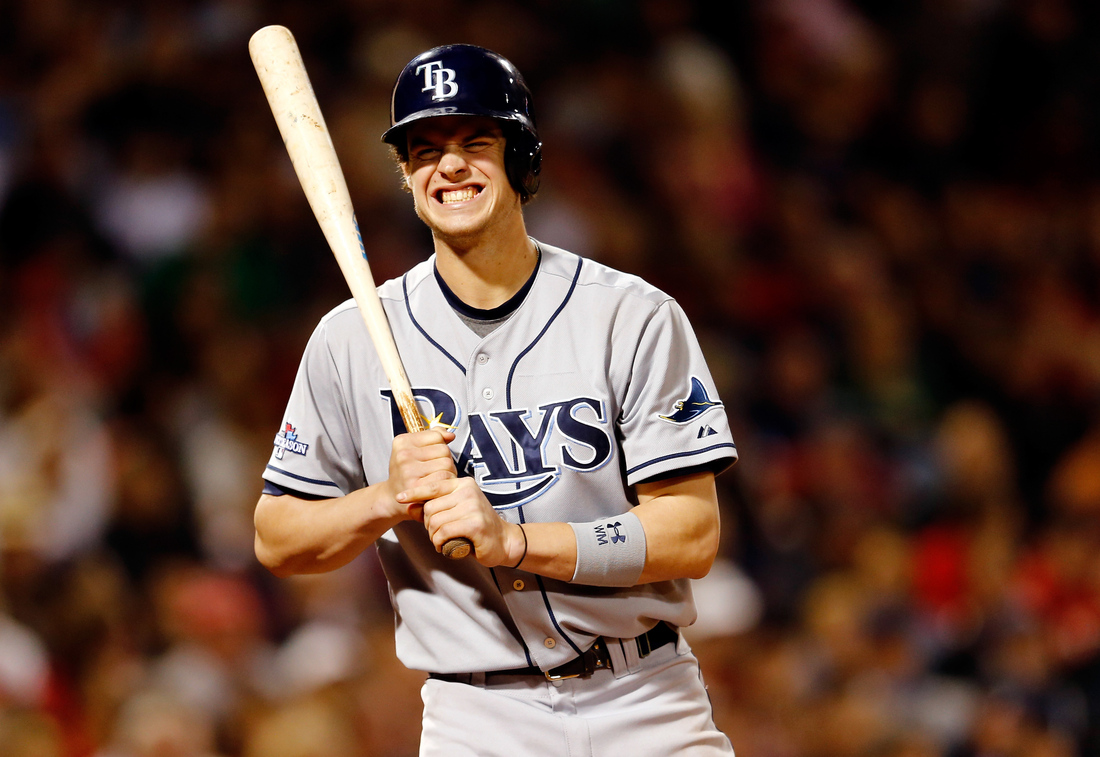 Get over your heart break, let's move forward with the analogy.

If Wil Myers didn't exist, the American League award would have been won by Jose Iglesias, a good defender with a marginal bat, who had a lucky year. You would not expect him to replicate his success often. But Wil Myers does exist, and we know more about him than his one year's worth of data. He was a top prospect. He's a fine athlete with amazing bat speed, and as you've doubtless been told several times, the ball sounds different when he hits it. Wil Myers will regress, but he will not regress to the same mean as Jose Iglesias.

Looking over Wil Myers's first season, it's clear that not everything is sustainable. Like Iglesias, he's unlikely to replicate his [.293] batting average in 2014, as it was propped up by a .362 in-play batting average, but there are other areas in which he may improve. His defense surely will improve as he logs more time in right field. His plate discipline could improve as he sees more major league pitching. And his power will likely improve because the raw power is there for anyone to see, his minor league power numbers were well above his already dandy major league performance, and that's just how players tend to age.

The fact that the Rays have two of the past three American League Rookies of the Year playing in Tampa Bay isn't all that exciting, but the fact that one of them is Wil Myers is pretty grand.

The list of Rookie of the Year winners came from Wikipedia. The WAR data was filled in from FanGraphs by hand. Much thanks to Dan and Michael for their help creating the spreadsheet. It took rather a long time, especially considering that we already knew what the result was going to be.

Please, use the data  (which you can access in its user-friendly form here) and do something cool with it (but note that fWAR uses different defensive metrics depending on what stats were available, so be careful when comparing across eras). I make no claims about accuracy.