2013 Prospects in Review: Second Base

Share All sharing options for: 2013 Prospects in Review: Second Base

There was only one second base prospect in the pre-season top 30, and I'm inclined to believe that will be the case for 2014 too. In a way, it's a position for runts. Prospects rarely start out at the position. Maybe they don't have the arm strength for the left side of the infield or the bat to profile at a corner position. There are mold breakers that make it as a pure second baseman, but the odds are against those players.

Power and arm strength aren't tools usually present at the position. Since it's an up the middle position, teams do value defense, but they're more willing to live with a bat-first player here than at shortstop.

After finishing the balance of his PED suspension to start the season, Brett played more like the hitter people saw in 2011. His walk rate dipped a little more, but he cut back down on his strikeouts and found some of his missing power. He was effective stealing bases as usual, and impressive performance with Charlotte earned him a late season trip to Montgomery. His walk and strikeout rates were similar, as was his ISO. A huge difference was his BABIP; that dropped 130 points after the promotion, and his average fell with it.

Brett finished a stint in the Arizona Fall League last week but didn't really perform well. He walked more than he struck out, but he finished with an OPS of just .582. AFL stats aren't indicative of anything in the future, but reports from the season pin him as a scrappy player with no tremendous tools (BA, $). Players like that can work, and his plate approach and base running will help him.

Blanchard was a two sport athlete in college, so the Rays were hoping to get more upside from the typical 15th round pick. Of course, that came with more rawness too. His plate approach was probably a bit better than expected, and although his .611 OPS isn't impressive at all, it was actually only 10 points worse than his platform season at Jacksonville State. Maybe now focusing on baseball can get him on track.

A lot has to come together for him though. He's not going to hit for much power, so he needs to do a better job making hard contact to get singles and doubles. Despite solid athleticism, he doesn't really steal bases, but it does allow him to play the middle infield. Tools-wise, he could probably play shortstop, but in college as well as the Appy League, he was clumsy. He committed 10 errors in 50 games with the Princeton Rays.

Tommy Coyle is not as highly regarded as a prospect as his brother Sean with the Red Sox, but it's hard to not notice his production in 2013. He didn't hit for power, but he pretty much did everything else, including play good defense at second base. His decent hit tool, patient approach and speed made him a great option for the top of the Bowling Green lineup.

The usual caveats for older players performing in leagues apply to Coyle here. A player from an elite college conference should feel comfortable in the Midwest League, and he's going to have to prove himself at higher levels. Some defensive flexibility would help him, but he can only play second base. 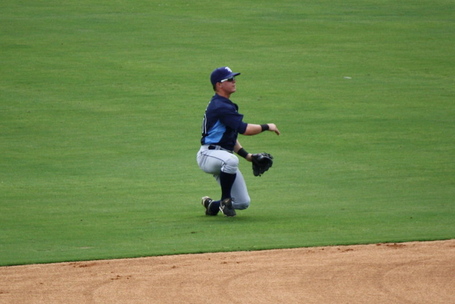 In 58 career games since arriving from the Venezuelan Summer League, Duran has yet to replicate his .276/.377/.410 line from the VSL in 2011. He's continued to draw walks at an above average rate, but a lack of contact has resulted in a ton of strikeouts and an average below .200. The 5'10, 150 pound middle infielder has almost no power to speak of in U.S. ball and doesn't seem to impact games with speed either. So far in his career, he's gotten most of his action at shortstop.

Fontenot has hit minor league free agency after spending all of 2013 with Durham. It was the first season since 2006 that the veteran infielder did not spend time in the majors. His season with the Bulls was pretty Fontenoian; his walk and strikeout rates were roughly the same, and he helped out the team all around the infield. Because he's approaching his mid-30's, has no power and doesn't really run well, it is concerning that he made less contact in 2013, but his experience and versatility will land him another spring training invite over the next few months.

Repeating the Florida State League with Charlotte, Guevara showed a bit of pop for a middle infielder with six home runs in his first 60 games. It earned him a brief promotion to Montgomery where he walked at a higher rate than he ever has, but he made even less contact and saw the power disappear. He was sent back to Charlotte to finish the season, but he finished his time there with an on-base percentage under .300.

Guevara hit for some power in the VSL in 2009, but until this year with the Stone Crabs, it had been nowhere to be seen in the U.S. He could use some of it because despite low strikeout rates throughout his entire career, he hasn't even been a .250 hitter in his career and hardly walks. He doesn't add much in the base running department, and it seems like he'll have to rely on defensive flexibility to continue his professional career.

Morillo was released by the Rays immediately after his 2013 season ended with Hudson Valley. He was the organization's top signing during the 2008 international player signing window but was never able to reach a full-season affiliate. Despite being billed as a good defensive shortstop, he played most of his career at second base. His .748 OPS with Princeton in 2012 proved to be a fluke perpetuated by a career high .347 BABIP. Since 2012, he walked in fewer than 3% of his plate appearances,

Price had been a solid performer throughout his entire minor league career, but his lack of tools finally caught up with him this year with Montgomery. He continued to walk more than he struck out, as he has his entire career, but with no power or speed, he loses all offensive value with a plummeting average. 15 extra base hits was a career low despite only being one home run shy of a career high. His approach and ability to play third base may keep him around a little longer.

When the Rays offered arbitration to Roberts last off-season, I was a bit surprised. For nearly $3 million this year, he spent time pretty evenly between Durham and St. Petersburg, combining for 321 plate appearances. He was clearly unproductive during his time in the minors, perhaps a product of the infrequent playing time he received at the big league level.

The minor league struggles were uncharacteristic for Roberts who at the very least has always been a good minor league hitter. His .065 ISO was easily the lowest of his career, but he did offer his usual right/left split, hitting for an OPS 104 points higher facing lefties. I can't imagine he'll get a guaranteed deal for 2014, but Arizona probably likes the grit he brings.

Rosa was also released immediately after the minor league season ended. He was unable to get out of rookie ball, spending the last two seasons between the GCL Rays and Princeton. With more career walks than strikeouts, he clearly had an idea of what to do at the plate, but he was never able to take advantage and actually hit. He once hit two home runs in the Dominican Summer League, but he didn't have any in the U.S. Over the course of his career, he also saw time at shortstop and third base.

In his third year in the U.S., Soriano had a career year since he arrived here from the Dominican Republic. He continued to be an effective base runner, but he also nearly doubled his career home run total with six, tied for the Hudson Valley lead with Oscar Hernandez. Overall, the slash line might not seem especially good, he slugged over 70 points higher than the league average in the offense-suppressed New York-Penn League.

His plate approach could clearly be a concern moving forward though. His career high walk rate was 7.5% way back in the Dominican Summer League in 2010, and more experienced pitchers could take advantage of his aggressiveness. He'll also be 23 years old entering full-season ball next year.

Wong's .767 OPS was easily one of the Rays' top performing 2013 picks. His .767 OPS was over 100 points better than the league average. He'll have to become more patient at the plate, but that's not unusual for an 18 year old hitter. While his walk rate was a bit low, he's not a hacker and frequently put the ball in play. One weakness he has at the plate is the lack of power. He's already filled out at 5'11 and 190 pounds and probably won't ever end up as more of a gap hitter.

He was billed as an advanced hitter in pre-draft scouting reports, and he lived up to that. He hit the ground running as a professional, and the Rays could send him straight to Bowling Green which they usually don't do with high school players. Wong could also play third base in the future, but he didn't at all in his pro debut.