With all the speculation surrounding the status of David Price and an impending trade, a question needs to asked: can Matt Moore be the Rays' ace?

Share All sharing options for: Can Matt Moore make the David Price leap?

The comparisons are inevitable. Matt Moore to David Price. Hard throwing left-handed pitchers who came up through the Rays' system. In fact, David Price debuted on September 14, 2008 and Matt Moore debuted on September 14, 2011. Both started one game in the regular season while making other appearances out of the bullpen. Both were called up and pitched in the middle of a playoff run, trusted by Joe Maddon. Both performed admirably.

Neither David Price or Matt Moore placed in Rookie of the Year voting in their subsequent seasons. In fact, the two had remarkably similar follow up seasons.

David Price has arguably been the ace of the Rays' staff since he broke out in 2010, his second full season as a starter. His ERA has fluctuated from year to year but his peripherals (as indicated by FIP) have been improving since his rookie season. Price has improved his FIP by continuing to improve in one critical area: limiting walks. Sure, his strikeouts were down but when looking at the FIP formula (FIP = ((13*HR)+(3*(BB+HBP))-(2*K))/IP + c), eliminating one walk is worth more than adding a strikeout. 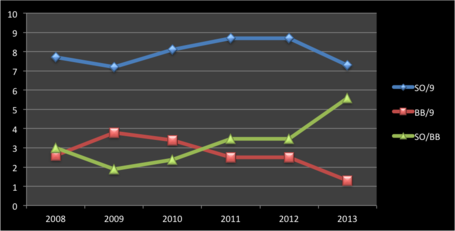 The chart above illustrates David Price's progression as he traded in his strikeouts for fewer walks. It is interesting to note that Price gave up a career high 8.6 hits per 9 innings but did such a good time limiting walks that he ended up posting a career low WHIP. He posted the lowest walk rate and the best strikeout to walk ratio in the American League in 2013. Despite missing time with injury, Price still led the AL in complete games and threw 186.2 innings. The ability to limit walks helps Price pitch efficiently. He averaged 7 innings per start in 27 starts but went over 100 pitches only 14 times, a testament to his efficiency this season.

The first following chart shows David Price's FIP and ERA each season. The second shows the difference between ERA and FIP in blue (ERA-FIP) and hits per 9 innings in red. As expected, the difference between ERA and FIP varies with the rate at which batters put the ball into play effectively. On this particular graph, when the value is negative, Price has outperformed his FIP. 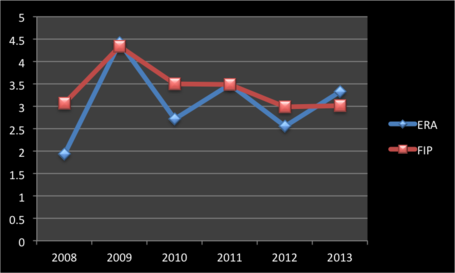 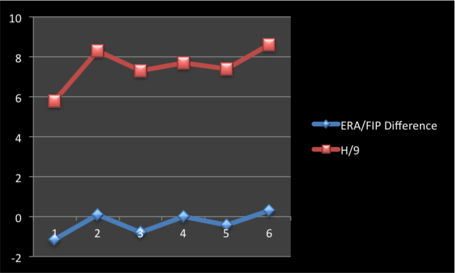 To further support the conclusion of the second chart above, the following chart compares the difference and hits directly with the R-squared posted. 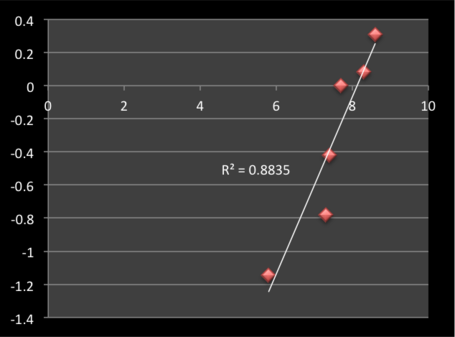 All of this data on David Price is good, but what can it tell us about Matt Moore? Matt Moore had a good season, albeit with some obvious issues. Like Price, Moore missed time with injury and made 27 starts. Unlike Price, Moore averaged less than 5.2 innings per start and threw over 100 pitches 19 times. In short, Moore was using more pitches to get fewer outs. This disparity came directly from Moore's command issues. Moore led the AL in wild pitches thrown with a whooping 17, ten more than knuckleball pitcher R.A. Dickey. Even more alarming was Moore's inability to keep the bases empty.

If Moore hadn't allowed a .263 BABip (Price was right at the league average at .299) and kept the ball in the yard as well as he did, he could have had a replacement level season. With Price's time in Tampa Bay most likely limited, the Rays will need a better performance moving forward from Matt Moore. As with Price earlier in his career, Moore is a thrower that needs to evolve into a pitcher. The comparison between Moore and Price is powerful but Moore did not take the leap that Price did in his second full season as a starter. 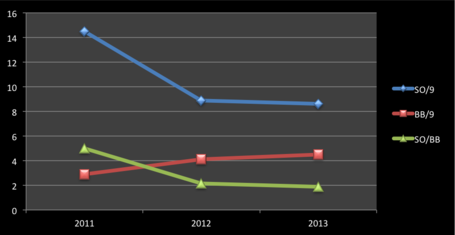 There is no noticeable improvement in Moore's stats moving from the second to third point on the graph. In fact, his walk rate increased and correspondingly had a decrease in his strikeout to walk ratio. Price experienced a noticeable uptick in strikeouts and drop in walks.

All of this does not mean that the future can't be a bright place for the Rays' younger lefty. The table below indicates that he could see an improvement in his FIP even while allowing more home runs if he can get his strikeout to walk ratio to around three.

Matt Moore only induced eight double play balls during the 2013 season, so it's surprising that he allowed so many baserunners without allowing more runs. If he can induce more ground balls, he could outperform his FIP by even more than he already does. Of course, if he starts allowing more hits, he's more likely to underperform. All of this conversation is pointless if Moore can't find a way to improve his command. It would not be surprising to see an improvement, if only a minor one. His career graph would not be radically different if he were to progress to above level. 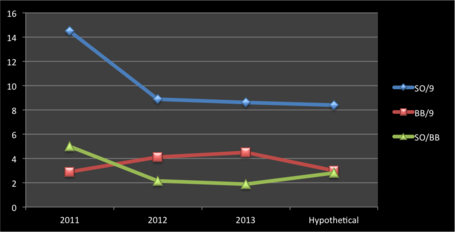 Now, what if Moore were to jump to this level instead: 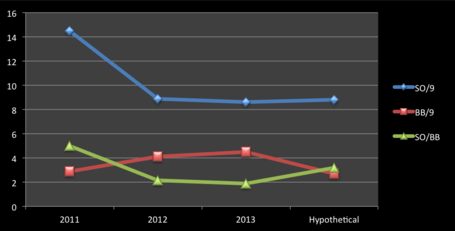 Now, this analysis could be more rigorous, accounting for age models and career arc models. There aren't any massive leaps taken here. The takeaway point is that as good as Matt Moore was last season, increased command ability could elevate him to the same arena as David Price over the last several seasons.