Should the Rays pursue Mitch Moreland?

Share All sharing options for: Should the Rays pursue Mitch Moreland?

The Rangers acquisition of Prince Fielder for Ian Kinsler yesterday evening does not necessarily make last year's starting first baseman Mitch Moreland expendable, but it does make him available. The Rays should be on the lookout for buylow candidates to man first base on the trade market, and Moreland has suddenly entered that conversation.

Over his career, Moreland has averaged an 8.5% walk rate and 20.3% strikeout rate, with the latter number trending upward year-to-year. He swings with arms outstretched and somewhat of a stutter-step, and his strength tends to overcome what he lacks in consistency, but even that comes with a caveat:

Moreland will hit just about everything middle or low and away, but is useless on the inner half of the zone. 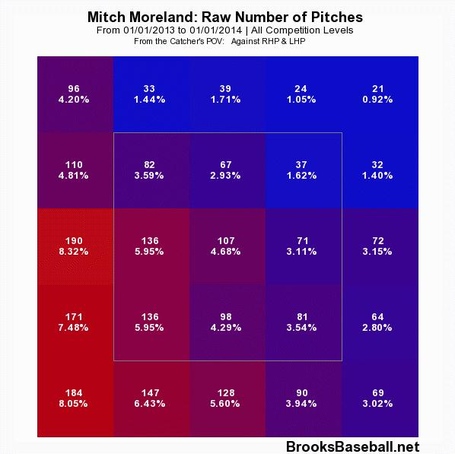 A left handed batter, Moreland has been slightly above average facing opposite handed pitching (career 106 wRC+), but actually performed better against southpaws last season, a sign of his abstract season. Moreland is not known for having a great eye, and chased over one-third of pitches outside the zone in 2013. He has an above-average tendency to swing and miss on breaking and off-speed pitches (37% and 41% whiff rates, respectively), and has a rather aggressive approach against the latter. He needs to lay off.

I believe that Moreland could maintain his .206 ISO -- which he flashed in his rookie season in 2010* and Steamer projects he'll come near again -- but I think he'll be league average in the other facets of his offense. On defense, Moreland is about league average as well.

If you're looking for a way to wrap your mind around Moreland, think of him as a worse version of Matt Joyce.

He is an incredibly streaky hitter, even though he flashes brilliance in some months (In August he held a 10% BB-rate, 15% K-rate, and 124 wRC+. In September, it was a 12.9% BB-rate, 31% K-rate, and 66 wRC+. Back in May, both BB- and K-rates were abysmal, but featured a .416 wOBA and 161 wRC+, with eight homeruns.) He hits the ball hard with the same zone profile, and has a lot of plus tools, but the rest of his game has panned out to be just average with hot and cold streaks along the way.

Overall, Moreland should be low enough on the priority list that the Rays find a better solution at first base without needing to place a phone call to Texas, but the option is now on the table. So there's that.