Or, why we won't know what to think about the Jose Molina signing until the end of the off-season.

Share All sharing options for: Jose Molina and value

I get it. Jose Molina is not a sexy signing. Yes, there are a few fringe nut-jobs, like the editor-in-chief of the most well-known and prestigious statistically-slanted baseball publication in the world, who appear to have an unhealthy obsession with Big Jose, but it's obvious to anyone with half a brain and a pair of eyes that he's not one of the league's top catchers.

But that's not really the point. It doesn't matter if Jose Molina is a top player at his position, because the Rays will only be paying him $1.75 million in 2014. If the cost of a win in 2014 is $7 million, Molina will only need to be a quarter of a win over replacement level to justify his contract. The smart money says he'll produce more than that, and Andrew Friedman and Co. are nothing if not the smart money. 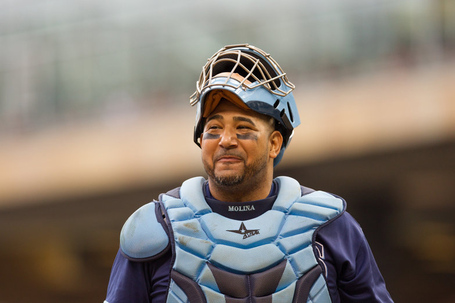 So how does mediocre Jose Molina help the Rays achieve their primary goal of making the playoffs and winning the World Series? Because Jose Molina doesn't live in a vacuum (a gruesome thought).

Say the two of us each have $12 and need to buy a dozen eggs. You find some really nice, organic, vegetarian-fed, cage-free eggs at a price of one per dollar and buy them. You are happy because you have high quality eggs in every spot of your carton, and anyone you ask will agree with you. I on the other hand find some bargain-basement, environmentally-unsound eggs for 25 cents each. I buy eight of them leaving me with ten dollars to spend on four eggs. I can now buy the best eggs on the market ($2.50 each), and while my carton will be uneven, it's worth the same amount as yours.

But what if those 25 cent eggs aren't actually so bad? What if the farmer simply hasn't spent as much money on advertising as he should have, but his chickens are also running free, and I happen to know this because I've visited the farm? They're still not as nice as yours, but they're a lot closer than you think, and they should have been priced at 50 cents each. In this situation, I now have $14 dollars worth of eggs to your $12.

And finally, to stretch the analogy to its breaking point, say that you're richer than I am. You actually have $14 to spend compared with my $12. My only choice is to go bargain shopping for the admittedly inferior but high-value eggs, and then make up the difference with a few high-end purchases.

That's what the Rays have done with Jose Molina. He's not necessarily great, but they're confident he'll provide good value, because they know more about him than other teams do. The value will allow them to spend more somewhere else. So when David Price is kept around for another year, we'll have Molina to thank. When a true right-handed power bat fills in our DH platoon, or a decent first baseman comes to town, it's because of Jose Molina. If you don't like the first-baseman, David Price is traded for prospects who don't have an immediate impact at the major league level, and the Rays win 88 games and miss the playoffs, then by all means complain about the cheap owner and the complacent front office. But not yet.