Share All sharing options for: 2013 Prospects in Review: Shortstop

We wrap up the position player recaps with one of the more interesting positions in the organization. The Rays have struggled developing their own long-term solution at the position, but maybe they can break that trend with one of the players listed here. In addition to the four top 30 prospects, there are a number of under the radar players that could be on the rise.

Teams generally value the defense tool here more than the others. Part of the Rays' remarkable franchise turnaround can be attributed to their emphasis on defense, particularly at shortstop. Arm strength is important as well on the left side of the infield, and anything they get at the plate is a bonus.

Lee was off to a great start in 2013 before a devastating knee injury ended his season in April. Obviously all caveats of a small sample size apply, but it appeared he was ready to move beyond his mostly disappointing 2012 with Montgomery. I don't know if it's possible to find something he wasn't doing at a career best, but again, what happens in 57 plate appearances doesn't necessarily happen over the next 570. A .514 BABIP is probably difficult to sustain.

Thanks to Yunel Escobar's solid play, Lee's injury didn't drastically affect the team's 2014 plans. The Rays are "really encouraged" by his rehab, and the 23 year old will return to Durham next year and prove he can hit there over the course of an entire season. He'll have to prove his injury didn't significantly hurt his best tools, his defense and speed.

After completing a strong second half with Bowling Green in 2012, Hager didn't have the same success. His season was a tale of two halves; in the first, he posted a .697 OPS, essentially the league average. In June, he suffered a shoulder injury, and he was never the same player when he came back. After his two week stint on the DL, his OPS was just .551.

Ideally for the Rays, the injury is the reason for the poor performance over the last two months of the season. The most glaring difference between 2012 and 203 for Hager was his modest pop. His ISO with Bowling Green was .131, compared to just .047 with Charlotte. He hit no home runs, but the difficult hitting environment of the Florida State League and his injury may not explain the entire decline.

In the past, I've written about the track record of first rounders who start their second full season in extended spring trianing. To be fair to Martin, he was injured at the beginning of the year, but when he was on the field, he showed he's still very raw. He's batted under .210 each of the last two seasons, and that highlights his biggest weakness: the hit tool. In his career, he has struck out in nearly 24% of his plate appearances, and he can't take advantage of his other tools if the ball isn't in play.

Martin will still only be 20 next season, so time is not an enemy yet. His standout defense at shortstop will keep landing him chances in a lineup, and his speed and decent power potential remain intriguing. Players who can't hit rarely learn how to do so, but staying on the field and playing a full season can't hurt his chances.

Blair was one of college baseball's most patient hitters at Wake Forest, but he struggled to do much more at the plate as a professional. His 12.8% walk rate was merely really good instead of comically high like when he was an amateur, and he didn't make enough contact to make up for his lack of power. Since he's a good base runner and defender, he could stick around for a bit.

Edwards struggled again in year two of his pro career, but he was still better than last year's debut. His athleticism helps him on the bases and will keep him up the middle of the diamond, even if it's not at shortstop. He was able to improve his walk rate a little, but he still has to cut down on strikeouts and make more consistent contact. With the other young infielders in the system, he's probably ticketed for another year of extended spring training.

After being taken by the Rays in the 19th round of the 2006 draft, Estrada hit minor league free agency earlier this month. He never hit that much, but his ability to play both middle infield positions kept him around. He had a nice walk rate and didn't strike out much, but he was almost entirely a singles hitter and didn't hit that many at that. Still, he's a 25 year old switch hitting middle infielder and should catch on somewhere else.

George had a solid season with Hudson Valley, posting a .702 OPS in the tough hitting environment of the New York-Penn League. He's been a polished hitter who can put the ball in play with a nice approach, but the power that was expected of him has not been there as of yet (BA, $). A report from this season says he has below average tools but good instincts (BA, $), and it was mentioned that he was arrested recently. I can't find any further evidence of that.

O'Malley hit minor league free agency this month, and with the depth the Rays have at shortstop, it's hard to see him coming back. It wouldn't surprise me if he reached the majors at some point. He had a career year at the plate, and that's in addition to all of the other skills he provides.

He may have no power, but he walks at a decent clip, is a very effective base stealer and plays very good defense at shortstop. Whether or not he can continue to produce average offense is a big question mark, but his defense alone will get O'Malley looks. 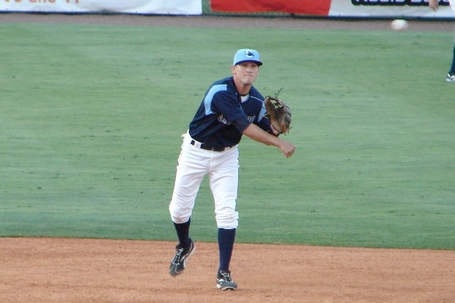 Paulino started a whirlwind year in the Dominican Summer League, the first of four leagues he would play in during the season. For my convenience, the stats displayed are from his last two stops, the Appy League and FSL. He hammered the DSL in his brief time there, and his .994 OPS in 42 plate appearances is way out of line with the rest of his career. He was clearly overmatched as an injury fill-in with Charlotte, but even with Princeton he showed he has to cut down on his strikeouts.

Quinonez's 2013 season started in June with Hudson Valley, but after a sudden breakout offensive performance, he finished the year with Charlotte playing all around the diamond. He hit 13 doubles in 25 games with the Renegades on his way to a .902 OPS, and he continued hitting well after the big jump to the Stone Crabs. He didn't walk once in 65 plate appearances with Charlotte, but even with his aggressive approach he hardly strikes out.

Quinonez never seems to play the same position two days in a row, and if he keeps hitting, it won't matter if he can't handle short. He was old for a player in short-season though, so it'll be important to see how he performs at more age appropriate levels.

Reginatto's season began in the World Baseball Classic representing his home country, a surprisingly competent Brazilian team. It finished with the best season of his pro career with Bowling Green. His .370 BABIP was surely a huge factor, but he was able to maintain a lower strikeout rate while increasing his walk rate to a career high. His .068 ISO was also a career high, but that's really splitting hairs compared to his .062 career mark.

Hot Rods manager Jared Sandberg observed better defense from Reginatto in 2013, and some of that could probably be attributed to his work with Barry Larkin, the manager of Brazil in the WBC. He had mostly played third base going into this season, but he saw a majority of action at shortstop with Tyler Goeddel at the hot corner. 23 is clearly too old for the Midwest League, and it would've been nice to see him get bumped up to Charlotte last year.

Prior this off-season, Toribio was unknown to pretty much everyone except Ben Badler (all BA, $ req. for last three.) Now that he's playing in the U.S., he should be on some more radars. His slash line isn't incredibly impressive, but his average, OBP and SLG were all either at or above the league averages. He's probably always going to strike out a bit too much because he's an aggressive swinger, but he should make decent contact and hit the ball gap to gap and utilize his speed to get extra bases.

With his athleticism and solid arm strength, Toribio should be able to stick at shortstop. Because of all the other young infielders in the system, he'll also get experience playing all around the infield, like he did when he played almost half his games at third base. Maybe he never reaches the majors, but for $65,000, the Rays have probably already gotten their money's worth with Toribio. 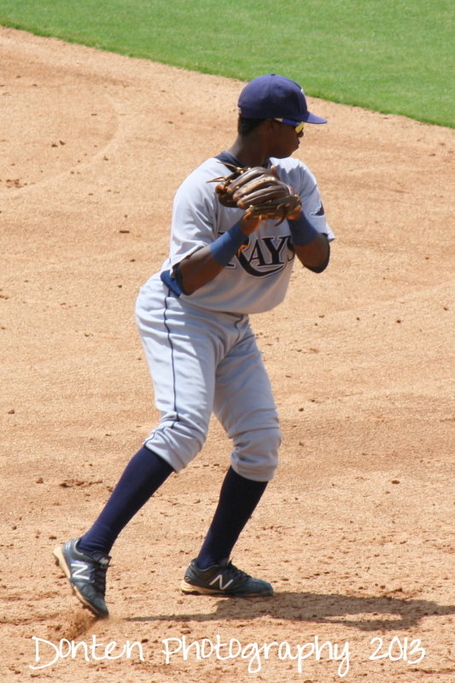 Unroe signed a little bit above slot for $997,500, and the middle infielder acclimated well to pro ball. He didn't make great contact, but his advanced approach allowed him to reach base consistently. He was an effective base stealer, and the power he showed at the end of his amateur career showed it has the potential to carry over in the tough hitting environment of the GCL. He won't be a major power threat, but 10+ home runs isn't out of the question for the switch hitter.

His defense is solid at shortstop and has the arm to play the left side of the infield, but it's not out of the question that he has to move to second base or center field down the road. He's smart and plays the game hard, and that effort will help him stay in the middle of the field.