2013 Prospects in Review: First Base

Share All sharing options for: 2013 Prospects in Review: First Base

After completing the outfield last week, we moved on with catcher yesterday and will continue the infield today.

My last two reviews have also been corner positions, so I've gotten used to writing about players that are supposed to hit for power. The speed, defense and arm tools are almost irrelevant here, but when a player does have the defensive ability of James Loney, of course it's a plus. Not everyone fits the big hit and power tools mold, but with nowhere else to go on the defensive spectrum for many of these players, their bat better carry them.

Only one top 30 prospect entering the season played a plurality of games at first base, and he probably is capable of playing elsewhere on the diamond. I can't say for sure if anyone else is going to jump up to that list this off-season, but one may be close.

Acquired in the James Shields trade as kind of the unknown guy in the four player haul, Leonard struggled for much of his first season in the Rays organization. He's a third baseman, but he played almost entirely first base this year with Tyler Goeddel holding down the hot corner. He hit 14 homers in 62 Appy League games last year, but he was down to nine in 123 this year.

Leonard clearly struggled making the transition to full-season ball, but he did improve in the second half. His first half slash line of .207/.291/.290 improved to .242/.315/.399. Although his walk rate fell from 9% to 8.1% and his strikeout rate rose from 22.9% to 25%, the Rays were probably encouraged by the uptick in power. He's playing in Australia this winter, and the extra reps down there could help him prepare to play for Charlotte as a 21 year old next year.

Drafted in the eighth round in the big 2011 draft, Alexander still hasn't been able to translate his athleticism to on-field production. He had a .870 OPS getting his feet wet in the GCL in 12 games his first year, but he's gotten worse since. The strikeout rate isn't overwhelmingly poor, but the walk rate is. He seems to be swinging at a lot of pitches and not making good contact while doing it. With results like this, it's hard to imagine him being ready for a full-season league next year. He hasn't played a game anywhere besides first base in his career.

In his third full season with the Bulls, Anderson had his best year. He set a career high in extra base hits, tied a career high in homers and posted a double digit walk rate for the first time. Yet as a 31 year old corner position player, his .832 OPS hasn't been enough to get a call to the big leagues even with the four year contract he signed in 2010 guaranteeing him money.

That contract expired after this season, and he might be a free agent again. He played 50 games in the outfield in each of the last two years, but with the way he hits righties (.922 OPS against RHP), if he could play a decent outfield, he'd probably have found a way up for at least a cup of coffee. His performance in the Venezuelan Winter League so far has been outstanding (1.153 OPS in 16 games), and he could join the Quad-A carousel of first basemen with players like Dan Johnson, Mike Hessman and Brad Eldred, signing a minor league deal and hope to catch a break.

The Rays acquired Belnome over the off-season from San Diego for minor league pitcher Chris Rearick, and they got a player that should reach the majors at some point in his career. After battling injuries his last two seasons in the Padres system, he stayed healthy and posted a slash line, and he was able to do it outside of the hitter's paradises that were his A-Advanced, Double-A and Triple-A leagues with San Diego. His power comes in the form of mostly doubles, but he makes good contact, works the count and gets on base.

Belnome offers a little more flexibility in the field than Anderson which could be a huge separator between the two. It's difficult if not impossible to find a positive report about his play at second or third base, but if he can fake his way at those spots, maybe he could be a bat-first man off the bench. He typically has some big platoon splits (as a lefty) and doesn't have the look of the typical major leaguer at 5'11 and about 200 pounds, but if he keeps hitting, maybe he'll get a shot. 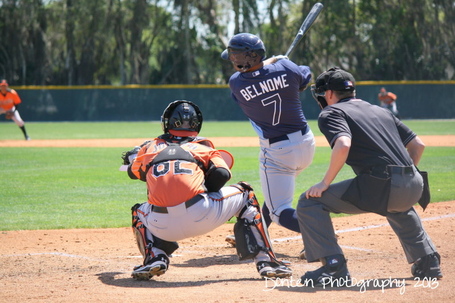 Prior to 2013, Correa had more experience playing on the left side of the infield, but he spent a majority of his time at first base for Princeton. In his second stateside season, he has yet to prove that his .914 OPS season in the Venezuelan Summer League wasn't a fluke. His power has almost completely disappeared, and even though he put the ball in play a lot with a reduced strikeout rate, it didn't result in getting on base much. His 6.0% walk rate was the lowest of his career.

Duncan made the Rays' Opening Day roster out of spring training, but once he was designated for assignment to make room for Luke Scott at the end of April, he never made it back to the majors. He eventually accepted the assignment to Durham and took over first base duties with Anderson and Belnome also on the roster. He wasn't the dominant minor league hitter like he has been in the past, but he provided some pop at times. He elected to hit free agency after the season.

Dunn played mostly shortstop in his pro debut last year, but he was more of a do-everything player filling in all over the diamond for Bowling Green. A large majority of his innings in the field came at first base and right field, but his bat is not close to adequate for either position. He can clearly work the count to get on base, but after walking more than he struck out in his debut season, his strikeout rate spiked this year. He has almost no power and didn't make nearly enough contact for a 24 year old player with experience at a big college program. His versatility may keep him around a bit longer.

After being drafted by the Rays in the 11th round of the 2010 draft, Flores missed 2011 and 2012 with injuries. Missing two seasons certainly doesn't help his timing at the plate, especially for players with pitch recognition issues like Flores. He has impressive raw power and was tied for second on Princeton in home runs, but his strikeout rate shows he has a lot of work to do. Just staying on the field is probably a positive for him at this point. He's limited to first base defensively, so he'll need to start making better contact.

Malm has been on the fringe of the organization's top 30 prospect list for a few seasons now, but his bat hasn't taken the necessary step forward to really break out. Coming out of high school, he was expected to be a high average player that can use all fields with questionable power, but the opposite has been true as a professional.

14 home runs is a career high, but he's gotten pull happy and is a career .248 hitter. He has struck out in over 20% of his plate appearances for the last four years, and he doesn't seem to be the same player that tied the high school record for career hits as an amateur. He has the arm to play left field but not the athleticism.

Pendleton threw out the first pitch at a Rays game this summer after he led the University of Tampa to a National Championship. They signed him as a non-drafted free agent, so that's probably the closest he'll get to playing at Tropicana Field as a professional. He played sparingly and may not be back next year.

An established member of the FreeZo All-Star team, Segovia had another very good season at the plate, although he hit one fewer home run than last year despite accumulating over 150 more plate appearances. He maintained his strong plate approach with a walk rate over 10% and putting the ball in play regularly. He suffered a concussion after being hit by a pitch during the season, but he hit just fine after coming off the DL for the last two months.

While he continued to hit at a higher level, his value was still hurt by move from catcher to first base. The bar for his bat is now set much higher, but maybe he can regain some of his lost power getting out of the FSL next season. If I'm interpreting the rules correctly, he could be ticketed for minor league free agency this week.

Despite winning the Southern League home run derby, Seitzer does not have the power to profile at first base. He did hit 16 home runs as a sophomore at Oklahoma, but that pop disappeared when the new BBCOR standards in college came into play. He then hit 11 home runs with Princeton in his first 64 professional games, but he only has 10 in the two seasons since.

He does have a patient approach that allows him to get on base and complement his decent feel for gap to gap contact. He did hold his own with Montgomery despite skipping over Charlotte completely. He has the arm to play a position besides first base but not the athleticism. 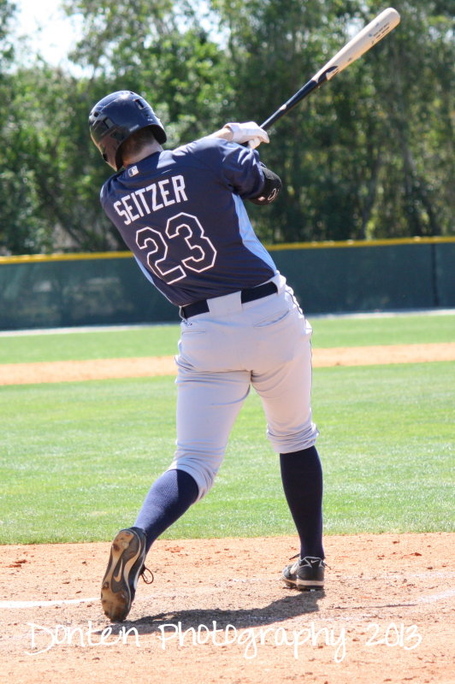 Simon came away with the Rays' Dominican Summer League MVP in 2012, but he found that hitting in the U.S. would be a bit more difficult. He did manage a .293 average (with a .384 BABIP), but he only had 11 extra base hits and no home runs through the entire season. In his three year career, Simon has actually played more games at third base, but all of them came in the DSL prior to 2013. His decent plate approach helped him post an OPS well above the GCL average, but unless he can find some power or prove he can sustain himself as a high BABIP player, I don't see him remaining above average for long.

Smedley was another non-draft free agent signing, and he only played in two games for the GCL Rays. He apparently spent most of his time as a bullpen catcher for the Stone Crabs, but he never appeared in any games for them. He previously played for Texas A&M International University, which is a bit of a misnomer because it is in fact located in Texas.