And a look forward at the platoon of David DeJesus.

Share All sharing options for: Retrospective: the Left Fielders since Carl Crawford

Since Carl Crawford entered free agency in the winter of 2010, the Rays have yet to find consistency at the left field position. The acquisition, and subsequent contract extension, of outfielder David DeJesus should provide an answer -- albeit one occasionally platooned against left handed pitching -- and it's about time.

The Rays have always been an organization that prides itself on pitching and defense, but has fluctuated between extremes on offense. By signing DeJesus, the Rays have a short term solution over the next two years to shore up what has been a carrousel beside the 162 Landing.

Here's a retrospective look at the Rays' offensive production from left field over the past three seasons, and how David DeJesus finally gives the Rays a starting left fielder.

Tampa Bay had a dynamic duo between left and center field for seven years, with Carl Crawford in the corner and B.J. Upton in the middle. When Crawford left town for a lucrative deal via free agency, the Rays have had a number of players man his old position.

The initial expectation was that the Rays would be able to slot in outfield prospect Desmond Jennings. After brief exposure in September of 2010, Jennings would not join the outfield until July 23 in 2011. During that stretch before his promotion, the Rays rolled with a combination of the newly acquired Sam Fuld and bench OF Justin Ruggiano to bide their time, with Fuld named the opening day starter.

While his defense was superb -- 19.9 UZR/150 over 604.2 innings -- Fuld's breakout offensive production from left field was unfortunately unsustainable.

Whereas life with the Legend in left field was a roller coaster, and the promotion of Desmond Jennings in late July was a breath of fresh air.

In his first two months of play, Jennings was hot with a 187 wRC+ and the defense to prove he belonged in the bigs.

Next season, the position was all his. 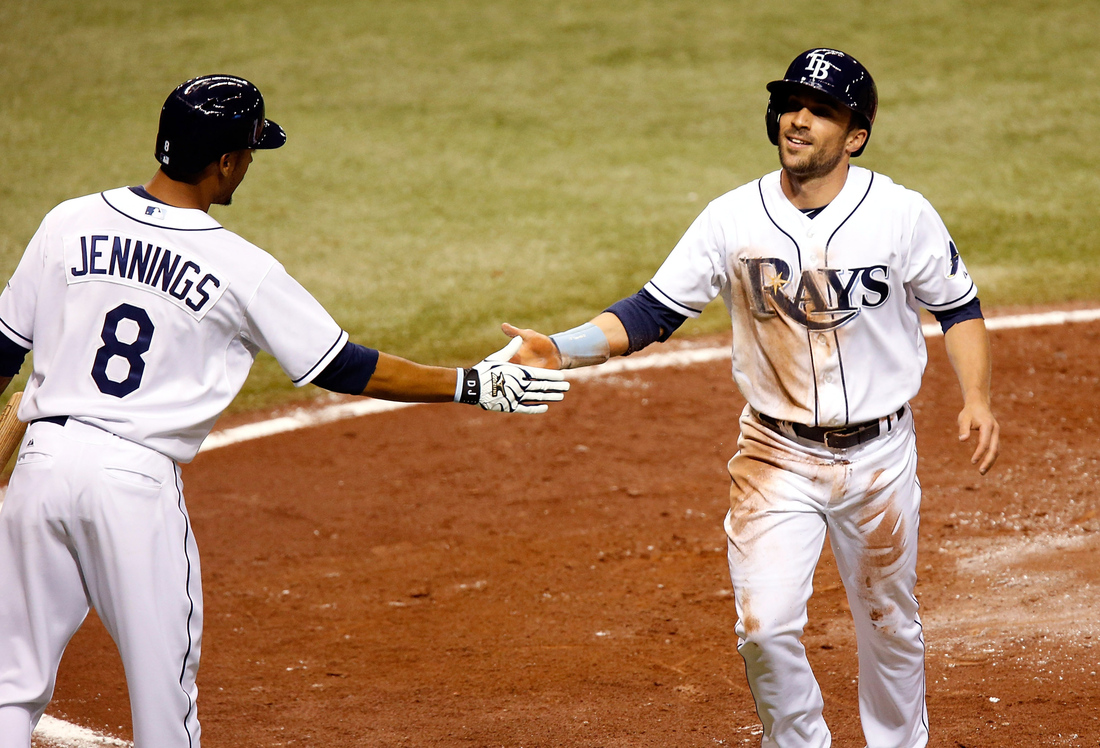 Jennings entered the following season as the starting left fielder with all the comparisons of Carl Crawford riding on his shoulders. Fantasy owners were salivating at the potential for stolen bases and solid hitting, and our fantasy baseball affiliate Fake Teams projected Jennings to have an average draft position of 55th overall, the 16th best fantasy outfielder in baseball.

Unfortunately again, perception was not reality in Tampa Bay's left field. Jennings would not only enter camp with shoulder soreness -- leading to a cold start to the season -- but would sprain his left knee on May 7th. The injury sidelined him for only three days early in the month, but he would tweak the knee again on June 5th. He was placed on the 15-day Disabled List, and would miss the next 21 games.

Furthermore, Jennings's playing time was also split with center field to cope with injuries to B.J. Upton, as he made 20 starts one position over.

Here's how things shook out in left field:

It was a down year for the Rays from that position, with Joyce's numbers looking inflated by a small sample size. Joyce also started 84 games from right field that season, with a near league average 104 wRC+.

And that's not to mention spot starts by Rich Thompson and Ben Francisco as Joe Maddon tinkered with the lineup.

Moreover, there was no clear incumbent for the following year. The Rays would make a qualifying offer to center fielder B.J. Upton, but he would thankfully decline, netting the Rays an extra draft pick and save a significant chunk of salary. Jennings would make the move to his natural position of center field, and the Rays would need to find another answer. 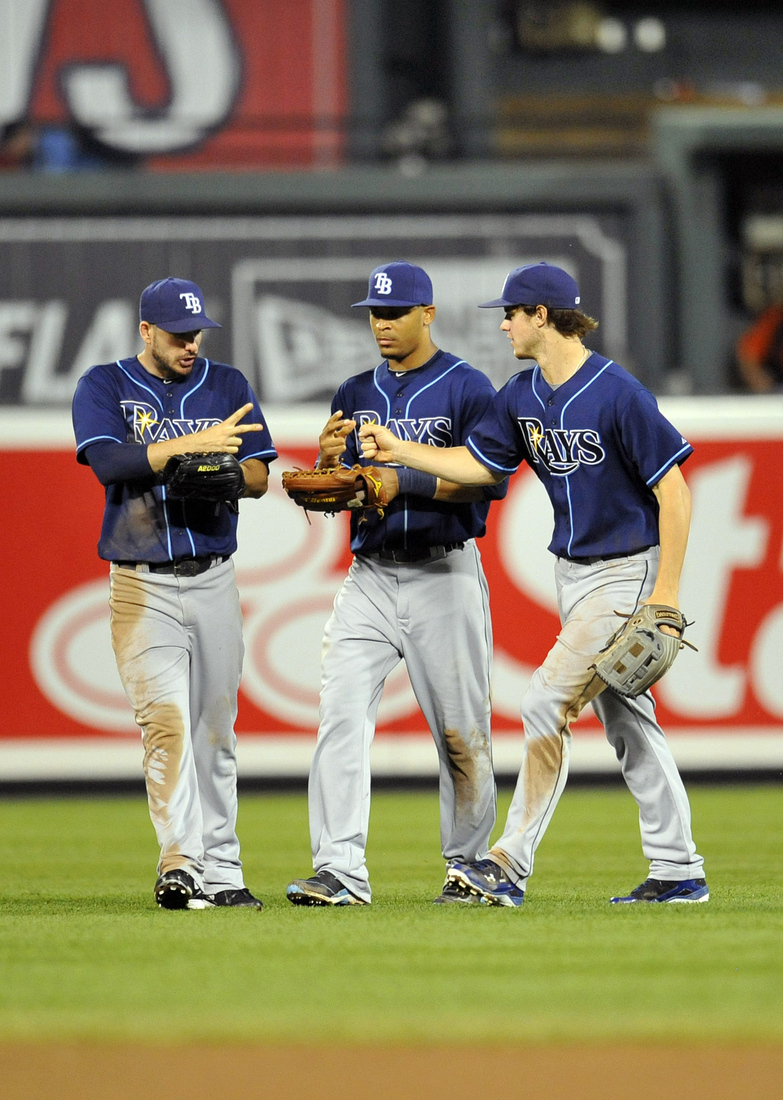 In the following offseason, the Rays would land outfield prospect Wil Myers in the James Shields trade. Myers was a converted catcher, sidelined by a knee injury in the minors, that had one season of center field under his belt. Defensively, Myers was a canvas, and the Rays would determine that right field would be his best long term fit.

Unfortunately, right field was not the Rays' position of need. Matt Joyce was a decent enough fielder to cover the opposite corner, but there was a further complication: Myers was not major league ready. The Rays needed to stave off his rookie status to ensure they would have an extra year of salary control and tinker with his fundamentals.

The Rays had flexibility in Joyce, Sean Rodriguez, and Ben Zobrist to cover the corners, but they would also make an unconventional move -- signing second baseman Kelly Johnson and giving him a left fielder's mitt. Johnson had played the corner during his time in the Braves system, and the Rays were convinced he could do it again.

Through creative maneuvering, Joe Maddon was able to insert Kelly Johnson and Sean Rodriguez when the pitching match up was favorable to each player's skill set, but that didn't make up for the offensive production suffered from best defensive replacement, Sam Fuld, and Matt Joyce struggled on both offense and defense in LF.

Joyce was again the victim of sample size, as he had 221 PA's from right field with a 155 wRC+ in 2013, but with the performances of Johnson and Rodriguez questionably sustainable, the average production from the position was in doubt.

And so it was, that mid-season, Andrew Friedman finally landed his man. 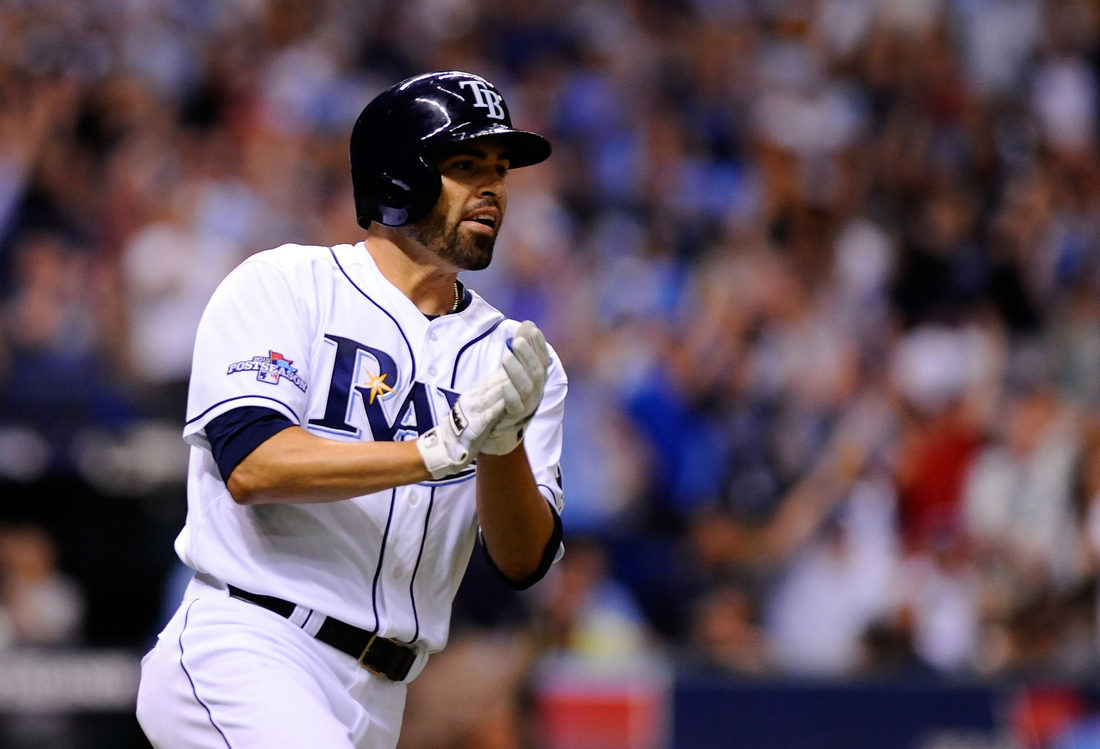 Outfielder David DeJesus was on the trading block that July, and once went from Chicago to Washington in a trade involving a player to be named later. The Nationals would using him for a couple at bats and then fall out of contention, promptly putting the outfielder on non-revocable waivers.

The Rays snatched him up.

Capable of playing center field defense, DeJesus immediately filled in the gap as the starting left fielder. He appeared in 35 games down the stretch for Tampa Bay between all three outfield positions, starting 15 games in left field (among 27 appearances at the position), two games in center (among seven appearances), and three games in right (among six appearances). That sort of defensive flexibility is a match made in heaven for Joe Maddon.

Moreover, DeJesus fit Tampa Bay's clubhouse and personality like a glove. He favored the opportunity to play with the Rays so much that he even took a discount to rewrite his contract this off season. The Rays were able to tear up his $6.5M option (which was closest to his market value) and extended DeJesus with two years guaranteed at $4.5M/$5.0M, with an option year for 2016 at $5.0M ($1.0M buyout).

There is, of course, the caveat: As a left handed hitter that is helpless against like-handed pitching, DeJesus's offense will be strictly platooned. Ian used some regression analysis, and found that a platoon with Sean Rodriguez, who is useful enough against southpaws, would generate about 2.3 WAR from left field next season, but I think that might be conservative.

Steamer already projects DDJ as having a 2.2 WAR season next year before his platoon, which would out-perform the regression analysis's expectations, and in Ian's calculation the Rays left field platoon has 7.5 defensive runs saved, which is equal to the position's requirement to be league average.

Furthermore, the answer does not have to be Sean Rodriguez. I re-ran the projections using Steamer (after finding an error in Ian's projections, wherein he used ZiPS while thinking he was using Steamer), and got the following projections for the Rays outfield possibilities in left field:

The oft-injured outfielder was acquired by the Rays in the Matt Garza deal, the same that brought ROY candidate Chris Archer and fourth OF Sam Fuld to Tampa Bay.

He lost 2012 to a dramatic shoulder surgery that required seven anchors to be placed in his labrum, which happened three games into his major league promotion. Fortunately for the Rays, the surgery cleaned up what has always been an injured shoulder for Guyer, and he didn't miss a beat in his rehab season at Triple-A.

Guyer will be 28-years old next season, though he has five years of control remaining, and has done just about all he can to prove himself in the minors. He would have been promoted this fall for the playoff push, but a fractured finger in his right hand sidelined him on October 9th, leading the Rays to use Kevin Kiermaier in his stead.

Promoting Guyer to a major league role would not be a drop off in defense -- like DeJesus, he is capable at all three defensive positions, though above average in the corners -- and would add a speed threat off the bench the Rays currently don't have. Guyer had 22 stolen bases at Triple-A last season.

Based on my own simple-WAR calculations, I found a platoon with Sean Rodriguez to be in line with Ian's calculation at 2.4 wins above replacement, while a platoon shared with Guyer would be worth 2.7 wins.

Granted, that's a small increase in the grand scheme of a season, but graduating Guyer would also free up Rodriguez to return to his role as the replacement infielder, where his defense is best suited.

All of that is to say, it won't be the 7+ WAR of Carl Crawford, but the next two years in Left Field should look fairly strong.