I've pretty much wrapped up the Rays' participation in the SBN offseason simulation.

You can read about my previous moves here.

You can find all moves here. 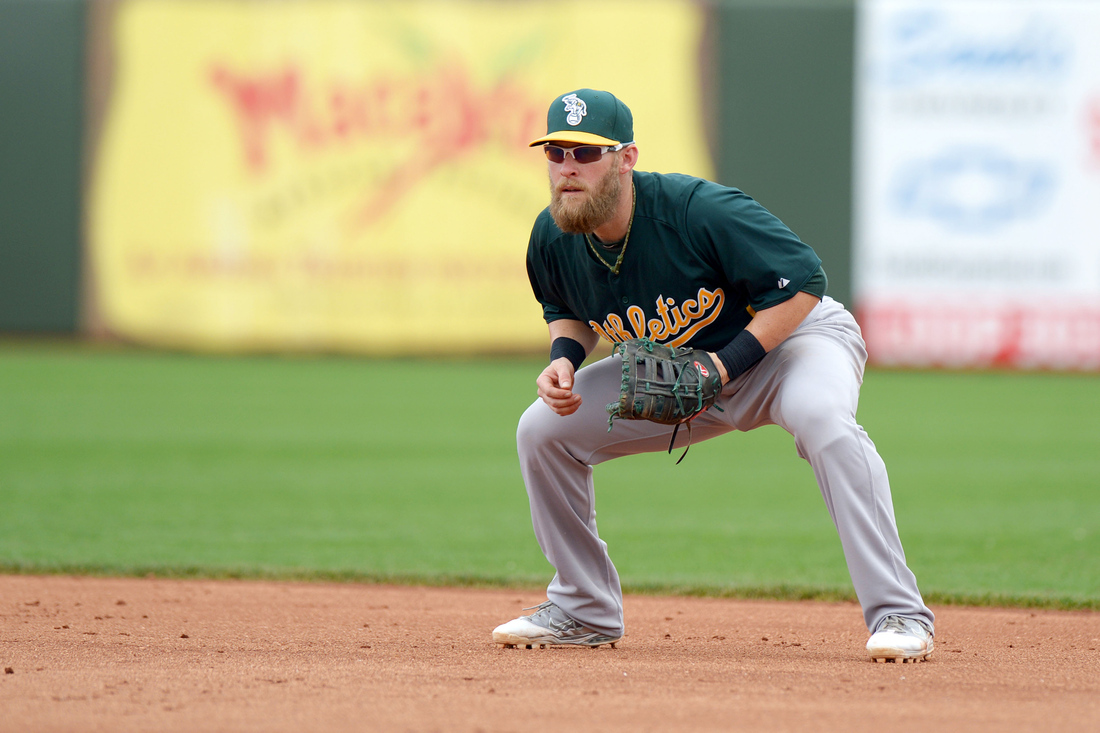 Since the Twins were trading me a good non-platoon designated hitter in Josh Willingham, one of either David DeJesus or Matt Joyce had to play left field, and the other one had to go.

I checked in on Kendry Morales to see if the qualifying offer form the Mariners was depressing his value much. He asked for 2/20, or 3/26. Kevin Youkilis and Gaby Sanchez wanted one year, $8 million, and one year $6 million deals, respectively (Youk actually signed for $4 million, so my bad for not offering that). I was intrigued by Sanchez, but wanted to wait it out.

Finally, I offered Daric Barton one year, $1.5 million, and he accepted on the spot.

I'm fairly happy with how this worked out. Barton (cut by Oakland) is one of the best defensive first-basemen in the league, and he has amazing plate discipline, but little power.

It's not all that different than the James Loney or the Casey Kotchman signings: Great defense, something right about his batting profile (contact for the previous two, patience for Barton), but also something wrong with it (lack of power).

The Rays have shown a willingness to work this way in the past, and I think they'll do so again. 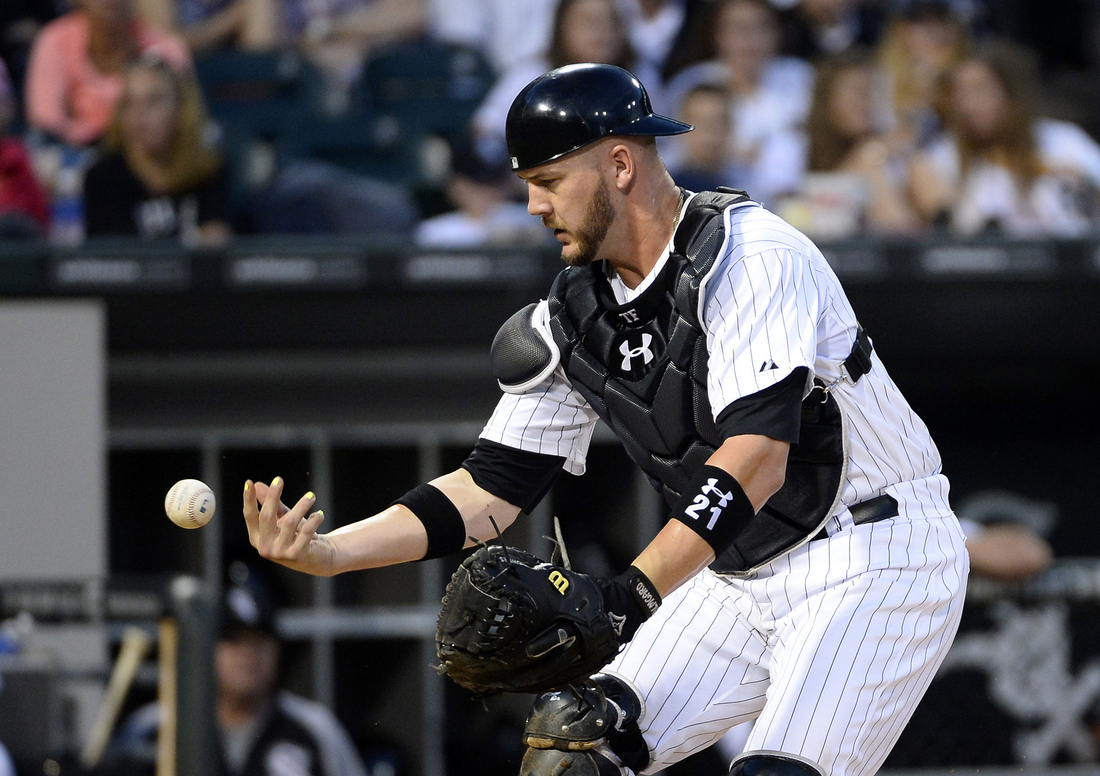 We were in pretty extensive talks with the Braves for Evan Gattis. They wanted a left-handed reliever, and I offered Jake McGee. They asked for Jake McGee and Richie Shaffer. I responded that Gattis was barely a catcher, and probably a disaster at first base, and reiterated McGee or Shaffer. They traded Gattis to Miami for Mike Dunn and Avery Romero.

I also spent some time trying to acquire Tony Sanchez from Pittsburgh. Since they had already traded for Andrew Susac, he seemed expendable, but Pittsburgh was operating under the impression that it's better to have more catcher prospects than not. They said they would consider a prospect swap, but would need to be wowed. I offered Richie Shaffer, Enny Romero, or Hak-Ju Lee. After considering a bit, they declined.

Now by this time, a bunch of decent free agent catchers had already been pulled off the market at affordable prices. I should have been a part of that bidding, but I wasn't.

John Buck went to Seattle for 1/2, Ramon Hernandez went to St. Louis for 1/1.5, Jose Molina went to Washington for 1/800K, Dioner Navarro went to the White Sox for 2/10, Brayan Pena went to the Dodgers for 1/900K, A.J. Pierzynski went to Minnesotta for 2/14, Geovany Soto went to Boston for 2/15 (lol), and Carlos Ruiz went to Philly for 2/12. Most of those deals are in the range the Rays should consider.

At this stage, I was a bit nervous that Chris Gimenez would be my fake backup catcher for 2014, so I offered Tyler Flowers one year and $2.5 million, with a team option for another year at $4 million, and he accepted. I think there's good upside here, but Flowers is coming off of shoulder surgery, so he's no sure thing.

As insurance, I also signed Yorvit Torrealba -- a very good defender, who Danny is a big fan of -- for $700K to compete for the backup job. Hopefully he will not win it. 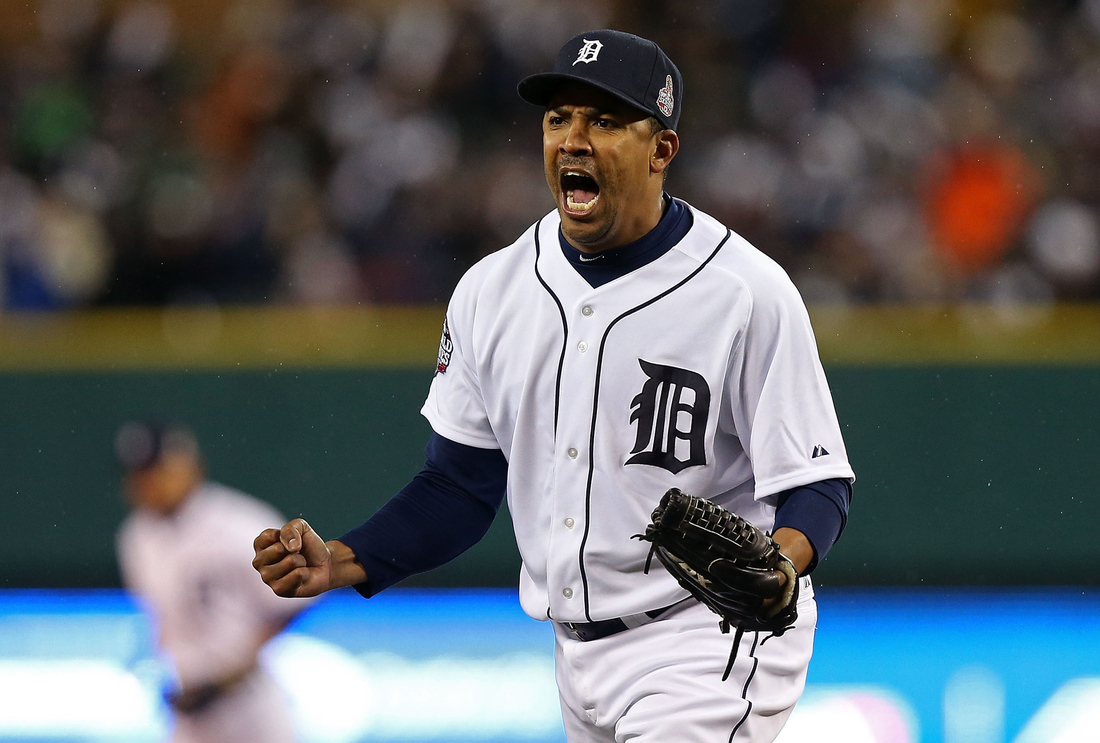 Unfortunately, I had already picked up the option on Juan Carlos Oviedo by the time the real Rays bought him out. This is one (of many) situations where the real Andrew Friedman has a real advantage over me. For the purposes of the sim, either assume that he'll be a good reliever, or credit me the $2 million I'm paying him.

My strategy was to offer short deals for not a lot of money to a lot of high-upside or niche arms. Octavio Dotel accepted one year, $1.5 million. I hope he actually pitches this year. If he does, he'll dominate righties like basically no one else in the league. J.P. Howell came home for 2 years at $3 million a year.

In regards to depth, Carlos Marmol accepted a minor league deal as the next Jim Hickey project, as did Michael Gonzalez and Jeff Niemann, who I'd non-tendered. Niemann accepted a $300 K minor league deal, which escalates to $1 million if he breaks camp with the major league team, and another $3 million if he pitches 150 innings, and a $3 million club option for 2015. If he doesn't break camp with the major league team, he may choose to become a free agent.

That pretty much fills the pen, and while there's no headliner in the same way that Fernando Rodney was last offseason, I think it should be at least as good as 2013, probably better. 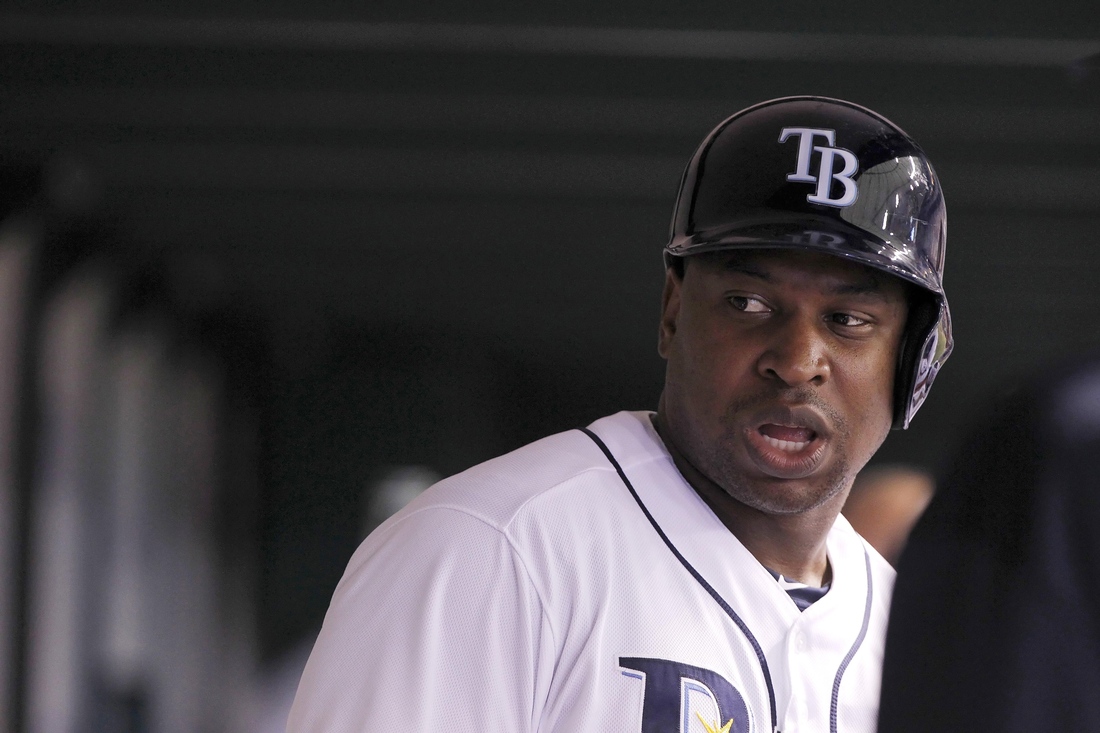 Brandon Guyer will platoon in left field, Sean Rodriguez will back up every position (and probably get some playing time at first base, depending on what the Rays think of Barton's reverse split), and Sam Fuld is still around.

Josh Willingham should be an every-day DH, but if he misses any time, we don't have a lot of cover, so I re-signed Delmon Young to a minor league deal.

Open question: Does Delmon Young or Sam Fuld break camp with the team? 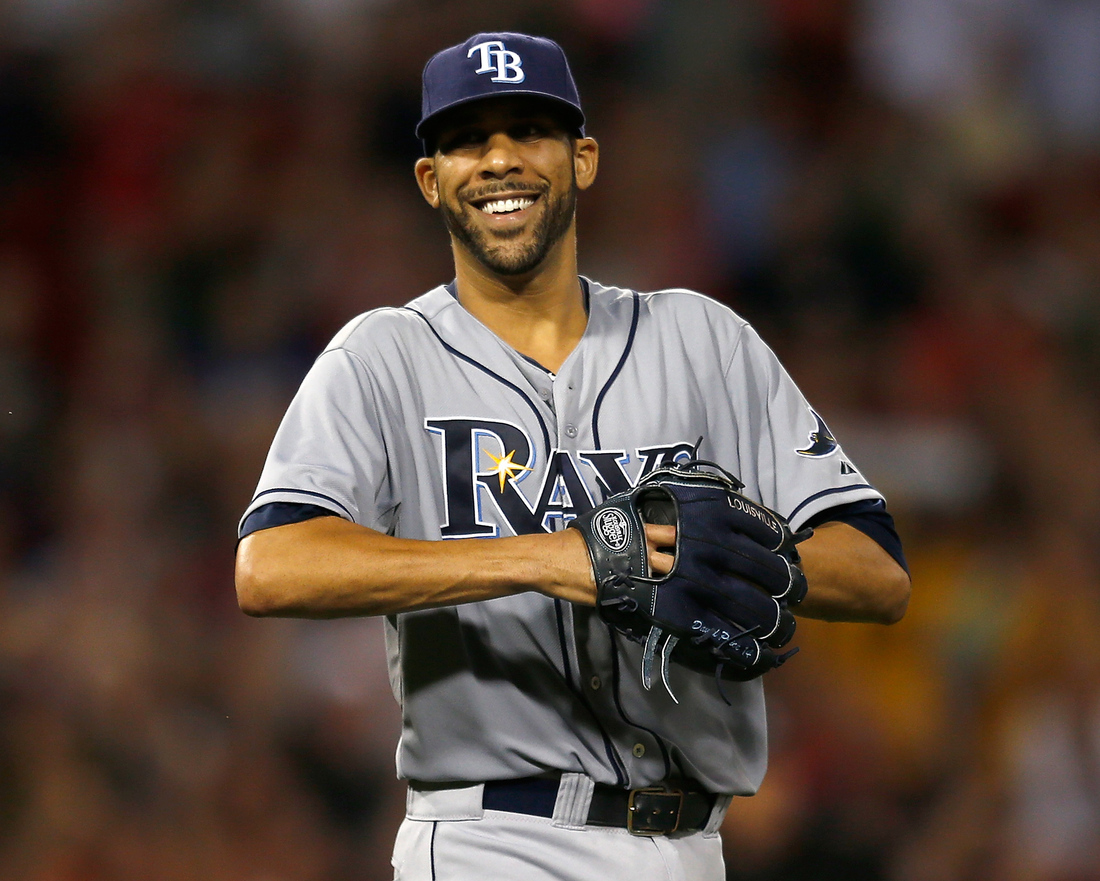 My goal was to assemble a competitive team (with David Price, unless I was wowed by an offer) while staying under budget (I was assigned $60 million, but I was comfortable pushing it to $70 million), and not mortgaging the future. I think I've done that. Right now I'm at $70.8 million in payroll, if you count Price's deferred salary (which the sim organizers don't know about, so they think I'm at $66.8 million).

That being said, assembling a winning team under $70 million is no walk in the park. I watched a ton of good value deals go on past, simply because I didn't have the money to chase them. You can get a much better first baseman with $10 million and a brain than you can with just a brain.

Most interestingly for me, this exercise has gotten me to think a bit differently about opportunity costs.

Every free agent signing caries the opportunity cost both of what else you might do with the money you're paying him, and what else you might do with the roster spot. The worth of the roster spot is dependent on how much value you're able to buy with the money you have available, and the number of free roster spots you have. In that way, all moves are connected, and it's wrong to evaluate a contract merely on whether or not the player will fulfill the value. And to take it one step further, the worth of a superstar is different for each team and each market.

Say that David Price will produce 6 WAR next season, while being paid $17 million. If he's traded for prospects, can the Rays replace that on the free agent market? Yes. They could probably sign three 2-WAR players at $5 million each. The difference is that David Price only has an opportunity cost of one roster spot, while the other players will have an opportunity cost of three.

If the Rays are at the top of their budget already, there is no difference. Price plus two spots filled at replacement level is the same as Price's value averaged over three spots, but if there's a bit left in the budget, having a single great player rather than a three-headed monster lets you use it. That's just one example of what I hope to flesh out in a reflection piece later. 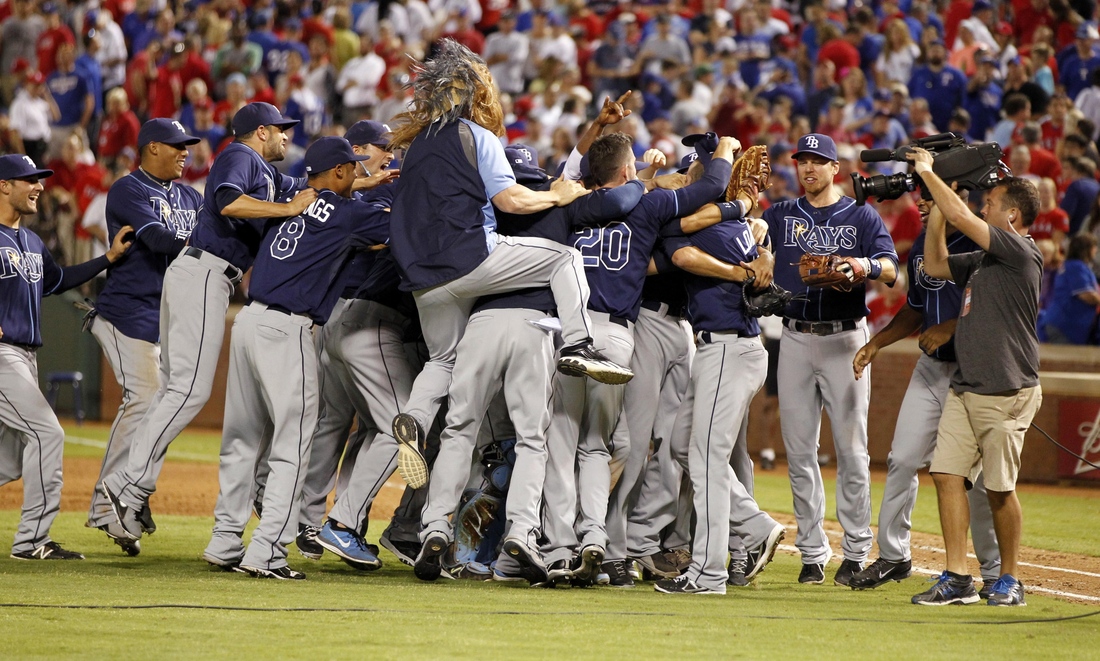 Final Thought: Yes, I'm going back to the dreaded first base platoon. Probably, Joe Maddon will not use it. Daric Barton actually has reverse splits over his career (although not recently), so that will be up to the actual team staff to figure out. All I can do is give them the tools . . .

Final Thought: Jake Odorizzi, and potentially Jeff Niemann, will be able to compete for a slot in the starting rotation, but it's likely both are merely insurance at Triple-A, should injuries occur.

Final Thought: There's a ton of upside here (and don't forget Juan Carlos Oviedo!). In the sim market, it's easy to throw cheap pasta at the wall. I'll be curious too see what these guys get in the real world.