Not many of these players will ever wear a Rays uniform in a regular season game, but they do have the brother of a well known NBA player

To be honest, we're at the point in this series where you're not going to see quality prospects. There's an occasional intriguing player here or there, but it's hard to just find information on most of these pitchers. Pitchers who are already in the bullpen in the minors face a serious uphill battle to make the majors. Unless they have a great pitch to get strikeouts, generate ground balls or throw from an odd arm slot, they're not going to stand out very much.

Alvarez made his U.S. debut after two years in the Venezuelan Summer League and improved his strikeout rate by 10 points. He also walked a lot more batters though.

For the second straight year, Bellatti had a decent year out of the bullpen, but an early season promotion from Charlotte to Montgomery proved to be too soon. His strikeout rate plummeted to a career low 14.8%, and his walk rate was a career high 9%. His numbers with Charlotte were more in line with the rest of his career though.

Cabrera was once an outfielder in the Rangers' system, but the Rays scooped him up and sent him out to the mound after Texas released him. He was pretty solid with Princeton, posting a career high strikeout rate. Two poor appearances with Charlotte at the end of the season skewed his numbers a bit.

The Rays signed Choate as an undrafted free agent, and it's pretty impressive that just six months later, he had (a minimal amount of) trade value. It seems unlikely that they'll miss a 6'0 righty reliever with a mid-80's to high-80's fastball.

Crum was drafted from Oregon, but the Rays probably got their first look at him at Howard College on a staff with two other recent Rays picks, Nick Sawyer and Hunter Wood. He had a pretty decent debut with Princeton, and now that he's another year removed from Tommy John surgery, maybe he hasn't hit his ceiling yet with a low-90's fastball.

Echarry has not been good in his two seasons in the U.S., but he was better this year. His strikeout rate was the highest in his U.S. career, and so was his opponents' batting average. That came with his lowest BABIP in the U.S.

Most of Fernandez's innings came with Princeton where his strikeout and walk rates were both a bit better than those overall numbers. Prior to this year, he struggled in two seasons in the VSL, as do a lot of pitchers.

Fisher was released by Oakland in August, and the Rays scooped him up a few days later. His five appearances were unmemorable, and he is now a minor league free agent.

Fleming struggled for the second straight season, and it's now much more difficult to envision him wearing a big league uniform. His changeup was again rated the best in the Southern League, but his high-80's fastball just doesn't cut it in relief. Pitchers with better control might be able to make it work, but his walk rate has consistently been higher than 8.0%. 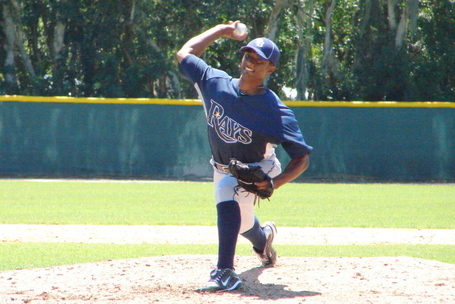 Not walking a batter in his pro debut was impressive, but it was a very small sample of innings. After the draft, apparently I found a report that said his fastball velocity was in the low-90's. He missed a month and a half with what I assume is an injury.

Gabay is one of two Mahopac High School graduates in the organization, the other being C.J. Riefenhauser. Injuries, including to his face and throwing arm, have limited him to 29 innings the last two seasons, but the Rays are going to stick with him because of his mid-90's fastball velocity.

Garcia improved over his 2012 season, but that was to be expected because he was repeating Charlotte. His strikeout and walk rates were actually worse (although inconsequentially so) than last year, but a 46 point drop in BABIP probably helped a lot.

Garton, a local product from New Port Richey, looks like he'll get a shot to pitch in Charlotte next year. He had a good season with Bowling Green, but it wasn't close to his great pro debut when he had a 28.7% strikeout rate with Hudson Valley.

Gauthier was actually slated to pitch in the Cape Cod League last summer until the Rays added him as an undrafted free agent late in July. His walk rate was pretty good, but it's uncharacteristic compared to his junior season at Southern New Hampshire. 10 innings is a small sample though.

The Rays acquired Geltz just before the season started for Dane De La Rosa, and he had another strong performance in the minors. He has some trouble throwing strikes, but he maintained his career strikeout rate over 30% thanks to his hard fastball and breaking ball combo. He probably could have a little major league success.

Gil couldn't maintain his 21.5% strikeout rate from last year, and that's now looking like a fluke compared to the other two seasons in his career. Despite a walk rate that's a bit too high, his career WHIP of 1.18 in 80 innings is solid. He generates ground balls at a decent clip.

Gomes missed a lot of time with a shoulder injury this year, but he was still a really effective reliever for Durham in a handful of innings on his way back to the majors. His limited time in the majors suggests he can get righties out pretty well.

Gomez is another player that signed as an undrafted free agent. 15 of those innings came with Princeton where he managed to avoid issuing free passes, but opponents did bat over .300 against him. He kept the ball in the ballpark though, so maybe he was just a bit unlucky.

A couple years ago, the Rays signed Gonzalez for $225,000, and he has done a lot to earn it so far despite missing all of the 2012 season with what I'm assuming is an injury. His stuff isn't overwhelming, but he can obviously throw a ton of strikes and is probably a bit more advanced than the usual 19 year old.

I would imagine he was only pitching in relief coming back from a missed season. I expect to see him in a rotation or at least throwing more innings in 2014.

The Rays picked up Hamren from Atlanta for cash considerations in June when a series of transactions left Montgomery's pitching staff in flux. His performance with Montgomery was very similar to his performance with Mississippi in the Southern League. An inability to get his walk rate into the single digits will likely continue hurting his chances to get back to the majors.

Hanse was able to advance to Bowling Green in his pro debut as a 22nd round pick. For a 6'7 pitcher, he did do a good job throwing strikes, and his challenge will be to continue doing that in 2014.

Hubbard was pretty decent just with Charlotte, but he had a tough time in the upper levels with his average fastball and slider. His strikeout rate plummeted, and he wasn't keeping the ball in the zone either. The Rays released him after drafting him in 2010. 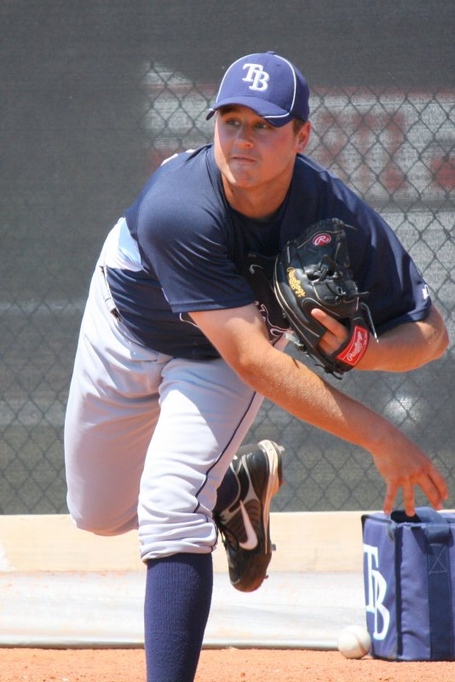 Hurtado has walked more batters than he struck out every season of his career. I'm not sure how long that's sustainable.

Inman was once a big deal when he was traded from Milwaukee to San Diego for Scott Linebrink six years ago, but he has never reached the majors. He was released after a couple months and wasn't picked up by anyone else.

Jensen signed out of high school, but he has always pitched primarily in relief. He has always been effective too, and his 2013 season was probably his best to date. He's moved one level at a time in his career, but it would be nice to see him accelerated a bit faster.

Cory will probably always be known as DeAndre's younger brother, but he was decent for Hudson Valley. He needs to cut down on the walks, but he kept the ball in the park.