With the possible departures of Fernando Rodney and Jamey Wright via free agency, GM Andrew Friedman is looking for relief help. What are some targets for the Rays?

Share All sharing options for: Relief help: possible targets for the Rays

"I don't think we ever look at it as set or not set. It's about trying to be as good as we can be. I think we have very capable people to fill out both the starting rotation and the bullpen. If the season opened tomorrow, I think we would feel pretty confident about our ability to keep runs off the board. That being said, fortunately we have almost four months until Opening Day, and we have a lot of time to try to figure out how we can continue to get better"

The Rays have had a lot of success in recent years in finding quality relief help at bargain prices. Names such as Grant Balfour, Kyle Farnsworth, Joaquin Benoit and Fernando Rodney come to mind. The profile seems to be a hard-throwing reliever with control issues that is coming off a down year. For whatever reason, pitching coach Jim Hickey and the Rays have been able to coax excellent production out of some talented but maddeningly inconsistent arms.

With that in mind, here's a look at some free-agent relievers that I think the Rays might make a go at this offseason.

1. Joba Chamberlain - Joba made a big splash among Yankees fans in his rookie season in 2007. After a late season callup, he threw 24 innings, surrendering just one run. Flashing a fastball that touched 100 and a wipeout slider, he struck out 34 hitters. Since then, there has been little success. Since being moved back to the starting rotation in 2010, Joba has managed just a 4.25 ERA and a 3.90 FIP. Thanks to a litany of injuries including a brutal broken ankle suffered while bouncing on a trampoline in a Tampa jump center (seriously, 265 pound persons should avoid trampolines) he's thrown just 91.1 innings in the last three years. In 2013, Joba had a 5.64 FIP with a 13.1 percent walk rate. Still, his fastball has averaged a steady 95 miles per hour over the last four years, and his 71 percent first-pitch strike rate last year indicates that his control problems might not be as bad as they seem. In addition, his xFIP- of 87 suggests that he's been the victim of some bad luck. A change of scenery would befit the 28 year-old righthander, and he'll probably come cheap. 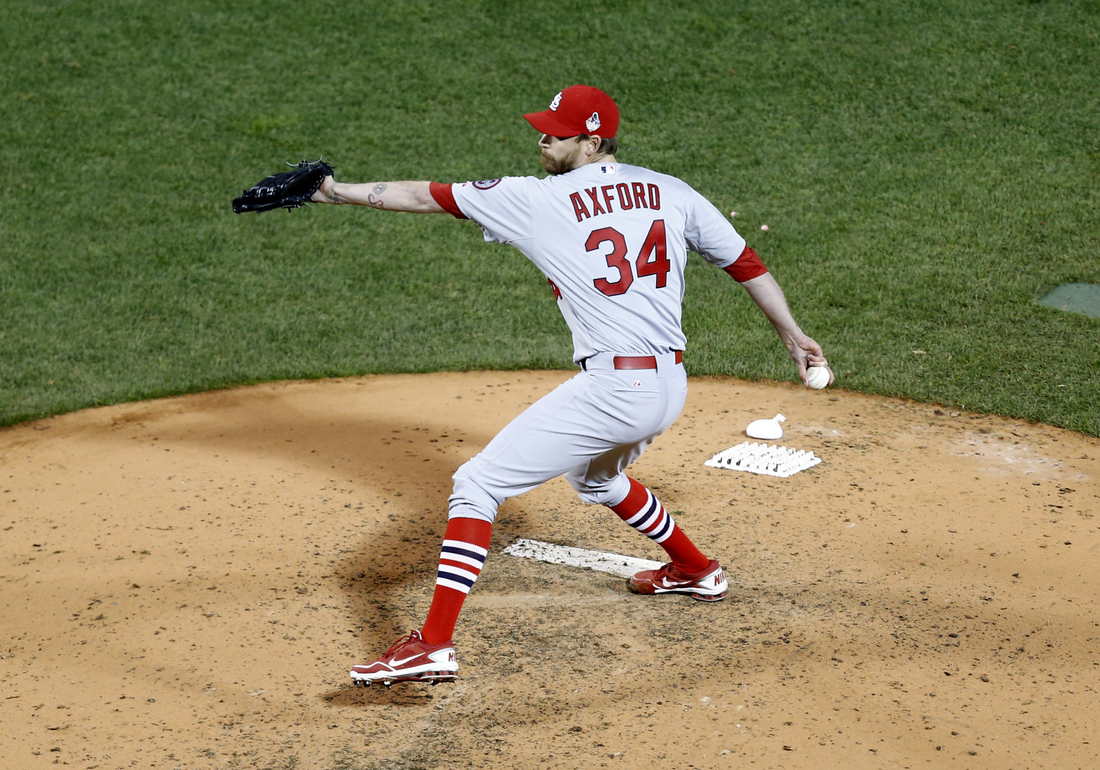 2. John Axford - The St. Louis Cardinals opted to non-tender Axford, who was due to earn about $5 million in arbitration. The 30 year-old righthander has struggled the last couple of years since his dominant 2010 and 2011 seasons. After surrendering 10 home runs in 54.2 innings with the Milwaukee Brewers, the Cardinals picked him up for peanuts. He enjoyed some success with the Cards. Including the playoffs, he struck out 20 in 16 innings with seven walks. Axford still throws in the mid 90's, his curveball is sharp, and he hasn't lost his ability to miss bats. A move to the Trop could help solve his home run problem. There's been a lot of interest in Axford, so he might come at a higher cost than the Rays are willing to pay, but their success in reviving hard-throwing relievers might be of interest to him.

3. Carlos Marmol - The 31 year-old reliever has never had any trouble missing bats. Marmol has a career 11 percent swinging strike rate, a figure that he matched in 2013. From 2007-2010, his 33.9 percent strikeout rate was the highest in the majors, and he owned a 2.54 ERA and 88 xFIP-. Since then, he's walked 16.7 percent of hitters and posted a 109 xFIP-. The Chicago Cubs designated him for assignment in 2013 and traded him to the Los Angeles Dodgers for Matt Guerrier. Carlos hasn't lost any velocity, and despite his struggles, he owns a 28.8 percent strikeout rate over the last three years. Before you write off the idea of acquiring Marmol, remember that Fernando Rodney possessed a 13.2 percent walk rate from 2009-11 before coming to the Rays, and in 2011 he walked 18.7 percent of hitters while striking out just 17.3 percent. 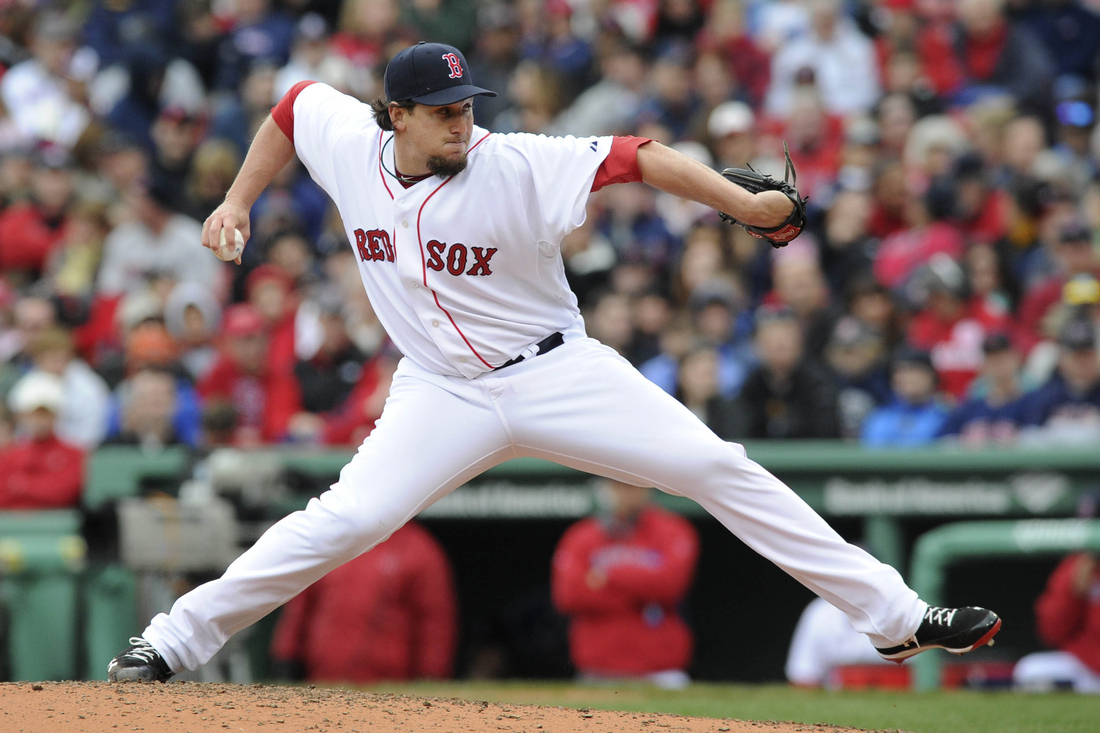 4. Joel Hanrahan - The man who was supposed to be the closer for the Boston Red Sox threw just 7.1 awful innings before Tommy John surgery ended his season. Then Koji Uehara happened and everybody forgot what a disaster Hanrahan was. Hanrahan is a flamethrower with upper 90's heat that came into his own with the Pittsburgh Pirates in 2010-11, posting a 2.40 FIP and a 28.4 percent strikeout rate against a 7.4 percent walk rate. He saved 36 games with a 2.72 ERA in 2012, but a 4.45 FIP suggested that he was more lucky than good. Over the course of his career, Hanrahan has an 11.4 percent swinging strike rate, and 11.2 percent walk rate, numbers that are equivalent to what Rodney has posted. Also, he's five years younger and will certainly be cheaper. Depending on how his rehab is going, he could be a nice low-risk, high-reward signing.

Dumpster-diving can be a good way to find value in the free agent relief market. Certainly it makes more sense than committing $20 million to Brian Wilson. One person's trash may be another's treasure, and the Rays have done a good job of finding treasure during Andrew Friedman's tenure. Snapping up one of these guys could be a nice way to continue that success.