Searching for a First Baseman, Part 3

An update on the first basemen the Rays have been tied to this winter. Focus moves to Loney, trade market includes Davis, Moreland, and Smoak.

Share All sharing options for: Searching for a First Baseman, Part 3

A serious concern for the Rays finding a first baseman will be someone who can receive and scoop throws, allowing the Rays' excellent fielders to have no fear tracking down a difficult play and letting it fly. That's subjective, but important.

In part 1 we attached steamer projections for some context on offense for the available first basemen, and in part 2 we featured the new Fangraphs made/missed fielding charts.

In today's roundup, I'd like to discuss the value of receiving at first base, but that doesn't appear to be readily available. Heck, I can't even find a definitive answer as to whether it's calculated into UZR; however, Fangraphs does detail "scoops" in their fielding statistics, which is a function of DRS, so that we can use that as a plumb-line.

For each first baseman under consideration, I'll include their most recent year played regularly at that position, the number of games played, number of scoops tallied (as calculated by Mitchel Lichtman), scoops as a percentage of put outs (which says more about the infield throwing his way), and as if that wasn't subjective enough, I'll add the general consensus on each player's "Hands/Catching" from Tom Tango's annual scouting poll.

#Rays Friedman says progress in 1B pursuit, could be resolved in "next few days"

Loney has immediately become the top target for Milwaukee and Pittsburgh, and if I'm reading these tea leaves correctly, he gone.

#Brewers have sincere interest in Loney but don't expect to get anything done at 1B before leaving Orlando.

Pirates also in on Loney. Don't get sense they're as high on acquiring Ike as alternative compared with Rays, Brewers.

He wants three years and $27M, he might get two years instead, but I can't imagine the Rays shelling out to outbid these teams.

The Astros and Giant had emerged as players for Morse, who is hoping for $7-8M next season. Morse does not have a strong reputation as a defender or using his glove well, so the assumption is that wouldn't translate to first base either, though he can man the position.

According to this morning's rumors, the Giants should be the team to land the slugger who was hampered last season by a wrist injury.

Update: Morse is indeed signing with San Fran, and is expected to share left field with Gregor Blanco.

Since hearing the Rays were casting a "wide net" and including Reynolds in there interest, there's been no waves. Reynolds most recent action at first base came a year ago with average results.

Youkilis was among the best fielding first baseman for a while, then he moved to third base to accommodate others, and went on to get very injured.

The Greek God of Walks wants to stay near his family in California, so I'm not sure why he'd be interested, but this sums up everything pretty well:

ugh be so hard to root for RT @TBTimes_Rays: Add Kevin Youkilis to the list of players the #Rays have expressed interest in.

We already worship Wade Boggs, isn't that enough? Even if Youk was willing to sign with the Rays, he has more banged up discs than the floor of my '94 Camry in high school. And he makes me tell bad jokes. Let's move along. 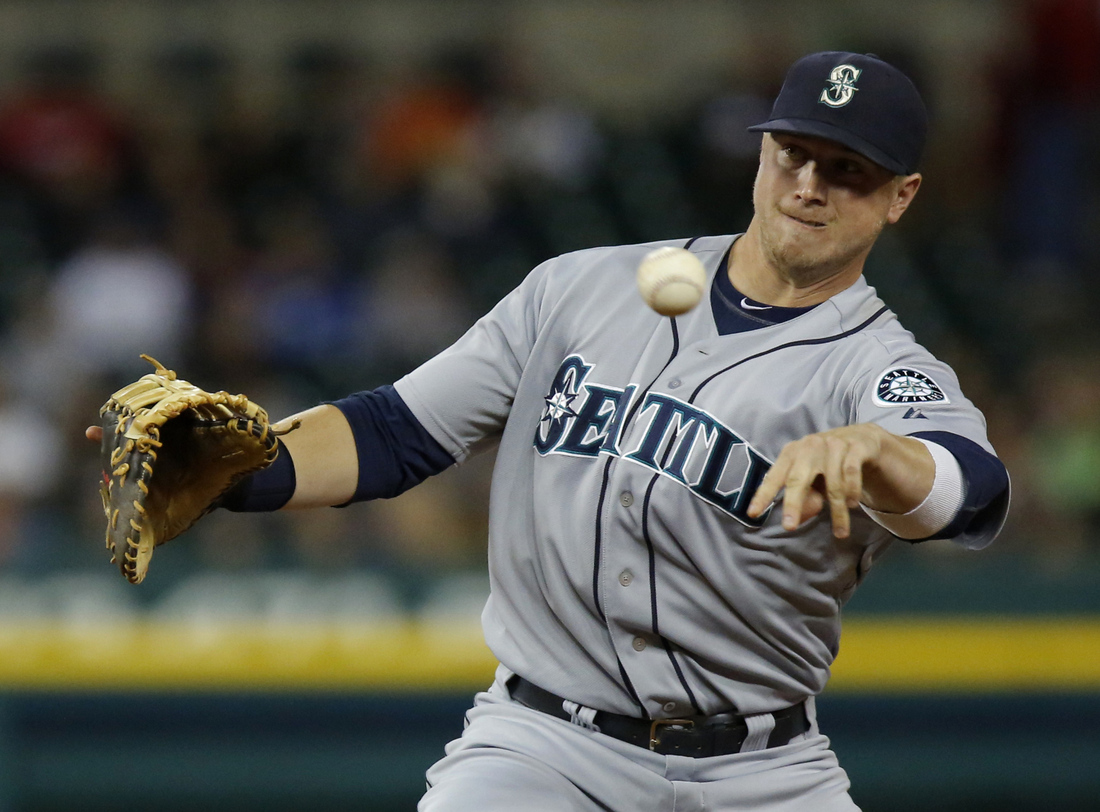 Two key first base candidates were acquired by the Mariners, which Ian covered yesterday.

Corey Hart is likely making his return to the outfield, which may have influenced the free agent's decision to turn to Seattle and bat behind Cano. He's off the list. Then the Mariners went and snagged Logan Morrison for what Ian called the Rays equivalent of trading Alex Torres.

Both of these acquisition free up one important name for consideration:

He doesn't seem to be the nimblest of defenders, but Smoak favored well in Tango's scouting poll in the hands/catching category.

At the plate Smoak is also very interesting. His 12.3% walk rate last season placed 14th in all of baseball, while his road wOBA placed 14th among first basemen, coupled with a 119 Road wRC+, and Smoak is good for about 20 homeruns per season, but those are silver linings on a weak profile.

Let's stay in a vacuum and say Logan Morrison is the standard for first base trades moving forward.

If the Mariners were able to land Morrison for Carter Capps, a young, hard throwing reliever with high leverage potential, I think offering a lesser reliever with plenty of salary control and potential to stick in the pen now will do.

In my mind, sending Josh Lueke back to the Mariners for Smoak fits the model they've put forth. If they feel like that's not enough, the Rays could add Jose Lobaton to the offer and allow Seattle to place Zunino back in the minors (where he should not have left last season).

The other trade candidates still standing are probably the best receivers at first base available, after James Loney.

Tied to the Rays yesterday, he's less popular than Morrison with more than adequate range and receiving. Moreland's got power, he's got defense, he's got control, and he's available after the trade for Prince Fielder.

Moreland had a 16.5% HR per flyball rate last year, in line with Mike Trout and in the top-30. When he turns on a pitch, notably a pitch away, it gets crushed. Texas likes his power, and the team could still hold on to him for defense purposes and designated hit Prince Fielder along the way.

To pry him away from the Rangers, I would be willing to build a trade around Brandon Gomes, who Ian and I feel has strong potential to be a high leverage arm down the road. He is young has many years of salary control ahead. However, Texas will probably not motivated to trade until they know how full the outfield will be.

New York has been aggressive in trying to acquire talent for Ike, and reportedly asked the Brewers for No. 2 prospect Tyler Thornburg, who is expected to break into the bigs this season at the back of Milwaukee's rotation.

Not surprisingly, that didn't go over well.

Sounds like Ike Davis will remain a Met beyond winter meetings, but should get dealt this month.

Per Adam Rubin of ESPNNewYork.com, Mets GM Alderson is keeping the cost high to acquire Ike: "Let me emphasize one thing: We're not in the business of giving players away."

If the concern is to find someone who can make their way into the rotation, the most I could see the Rays offering would be someone like Mike Montgomery, who needs refining at Triple-A. The rest of the rotation depth should stay in house.