The industry leader weighed in on the organization's top prospects

Yesterday, Baseball America released their annual Rays top 10 prospect list. You can view it here, but here are some of the key details: 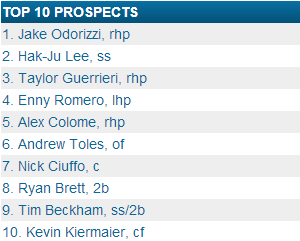 For a comparison, here's last year's: 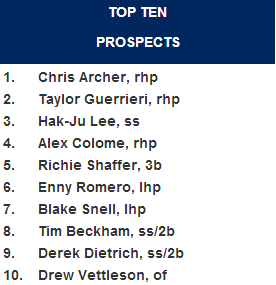 Clearly that was before the big trade that brought Wil Myers, Jake Odorizzi and two others to the organization and also the deal that sent Derek Dietrich to Miami for Yunel Escobar. Chris Archer graduated, and Richie Shaffer, Blake Snell and Drew Vettleson dropped out.

Another feature is the best tools in the organization: 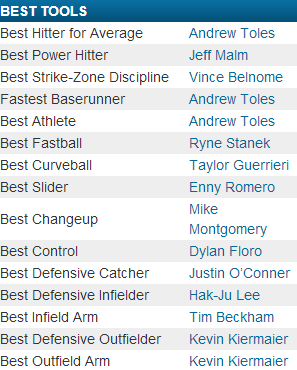 One thing that's new to their top 10 lists this year is the top 15 players under 25 years old. They used to do hypothetical lineups three seasons in the future, but that frequently confused people. 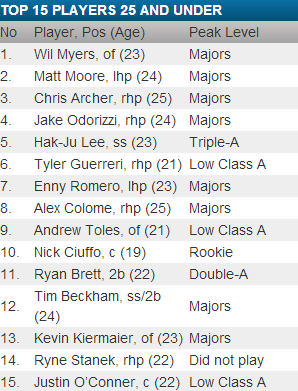 There is also content available for subscribers: scouting reports on the top 10 players and a chat with Bill Ballew about the organization.

I suspect that Justin O'Conner resurfacing in a serious prospect discussion may be the biggest surprise of all of this. Is it bad that Jeff Malm is the organization's best power hitting prospect?

To be honest, I haven't even started thinking about making a top 30 list yet, although we will be starting the annual community top prospect list before the end of the year. That makes it a little harder for me to really weigh in, but it's something to discuss now that the winter meetings are over.