Learning from the rule five draft

A copycat approach to predictions.

Share All sharing options for: Learning from the rule five draft

What's the quickest, and safest way to make a good prediction? Repeat what a known expert says. That's what Google asserted the Microsoft Bing search was doing, back in 2011: watching people use Google and then incorporating the Google search results (and user choices) into Bing.

Now I'm not certain whether that's ethical or not, whether it contributes anything to society or not, or if it should be considered cheating. What I am certain is that aping the industry leader is a good way to make sure your product works.

The football analytics website Football Outsiders does something more nuanced but similar with their Lewin Career Forecasts, which seeks to predict the NFL careers of college QBs (but claims to only apply to those QBs drafted in the early rounds). There are now seven variables involved in the projection system, but only one is of interest here: college games started. Think for a second on why this might help identify future successful pros. Some possibilities:

I don't mean to take anything away from Football Outsiders by comparing their projection system to Bing. Aaron Schatz himself has explained its success in these terms. The truth is that professional talent evaluators are pretty good at their job, and the Lewin Career Forecast is smart to identify those situations in which they're more apt to be correct, and use that data to its advantage.

But how can we apply the lesson to baseball? Well, the Texas Rangers apparently tried a very literal approach. Before last year, the Lewin forecast spit out an extremely rosy-seeming and now vindicated projection for QB Russel Wilson, so the Rangers selected Wilson in the minor league portion of the rule five draft from the Colorado Rockies.

There are other applications, though, and they start with the idea that MLB talent evaluators as a whole are good at their job. If a player appears to us like he's major-league ready, but his own team decides not to protect him from the rule five draft (by adding him to its 40-man roster), and then no other teams deign to give him a shot, then he's probably not actually ready. One team might miss on a player, or might have too full of a roster to keep him, but all 30? 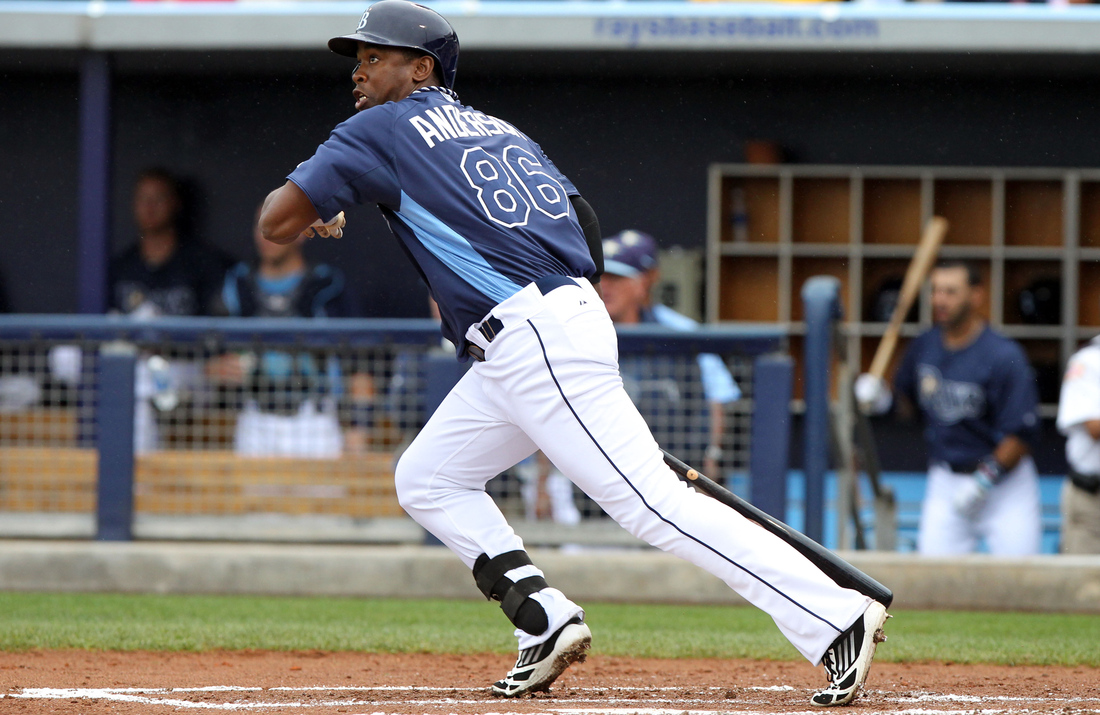 Once a coveted player from the famed Cuban national team, and a prominent figure in my favorite piece of baseball writing, Michael Lewis's Commie Ball, Anderson signed a four year, $1.75 million deal with the Rays after coming to America. The Rays soon found out Anderson wasn't really a center fielder, or much of any type of fielder for that matter. Still, he didn't strike out much, and after quickly advancing to triple-A in his first season with the Rays, he has posted above average offensive numbers in three of his four triple-A stints.

Each year, his isolated power has crept up (.167 in 2013), and last year, the 31 year old walked (10.1%) nearly as much as he struck out (11.7%). Surely there's room for someone like that on a major league roster somewhere? If he was a pinch hitter in the national league, he'd never need to play the field. Some here have expressed frustration at September pinch-hitting opportunities going to the likes of Sam Fuld while Anderson languished in Durham.

I feel your pain, but 29 other front offices just seconded the Rays' decision not to call him up at season's end.

Figueroa, who will be 27 next season, is a somewhat different case. He can probably play anywhere on the infield, although no one is lining up to watch him play shortstop. And while he has almost no power (.080 ISO in Durham last year), he walked (10.1%) nearly twice as much as he struck out (5.6%).

I get that the Rays have a deep roster with plenty of positional flexibility in the likes of Ben Zobrist and Sean Rodriguez, but isn't there someone out there with an open spot on the bench in need of a competent defender who can be counted on not to get himself out? I mean, two years ago, the Rays may have missed the playoffs purely because of the horror show that injuries forced them to trot out across the infield.

I can convince myself that Cole Figueroa is a major league player, but that doesn't change the fact that the Rays thought having an unused 40-man roster spot was worth leaving Figueroa unprotected, and every other team thought he wasn't worth a roster spot + $50K.

The situation with Vince Belnome is different. The Rays saw fit to protect him from the rule 5 draft by adding him to the 40-man roster. Another former Padre minor leaguer, Belnome, who will be 26 next year, falls somewhere between the above two players on the defensive spectrum. He can't play defense like Figueroa, (although he's been listed as a second baseman, he's probably not) but he can hit better. Last year in Durham he hit for a .300/.408/.446 slash line, while walking 15.8% of the time and striking out 20.5%. Now that's a pretty good offensive performance, but a minor leaguer's bat needs to be truly exceptional for him to justify himself at first base or designated hitter.

So what separates Belnome, a hypothetically decent bat without a position, from Anderson, a hypothetically decent bat without a position? I'm not exactly sure, but the Rays protected one, while leaving the other available but ignored. So I'm confident that there is a difference. Trusting baseballs' front offices may not be a sexy way to make a prediction, but it works, and it's at least something to think about when voting on the community prospect list.