Appreciating the defensive wonder and line drive hitting of James Loney, the Rays first baseman for three years to come.

James Loney fits the type of player the Rays value, a glove first player with the ability to get on base. After yet another low-cost one-year signing that paid dividends for the Rays, they wooed him back with job security. It was a departure from the one-and-done model we've seen since Carlos Peña stopped being Carlos Peña.

The first base market was starved this off-season, and even more so once Corey Hart signed with the Mariners, and that same team acquired the available Logan Morrison. There were several other teams (Brewers and Pirates) interested, all with more money than the Rays, but none were willing to make the commitment the Rays were in terms of years.

According to Milwaukee beat writer Tom Haudricourt, the Brewers had, "no intention of going beyond two years with Loney," due to financial constraints. The Pirates, meanwhile, were only interested in a platoon share with Gaby Sanchez, who has two years remaining with the Buccos.

Loney started the off-season in search of three years and ~$9M per season, meaning the Rays would need to compromise on one or the other to return the defensive stud, and it wasn't hard for the other suitors to reach 2/$16 or 2/$18 in the bidding process.

Three years got the deal done, at an overall cost of $21M, including what is rumored to be a $5M signing bonus. That's cash in hand, in line with the bonus given to Evan Longoria when he signed his contract extension last year.

This is not only the first time Andrew Friedman has given a multi-year contract to a first baseman since Carlos Peña -- who extended his contract before the 2008 season for $24.5M over three years -- but it is also the largest free agent contract ever signed by this front office.

These are the largest guaranteed contracts given to a free agent by Andrew Friedman:

The asterisks mark contracts where players were re-signed after playing with the Rays in the previous season. These contracts function almost as an extension, as the Rays had a more privileged perspective and relationship prior to signing the player, but they are still free agent contracts.

This list does not include contract extensions for players that were still under team control, nor does it include player options. As you can see, the front office has been loathe to hand out guarantees.

Most remarkable of all, James Loney becomes the first player to receive three years guaranteed as a free agent since Andrew Friedman took over operations in 2005. 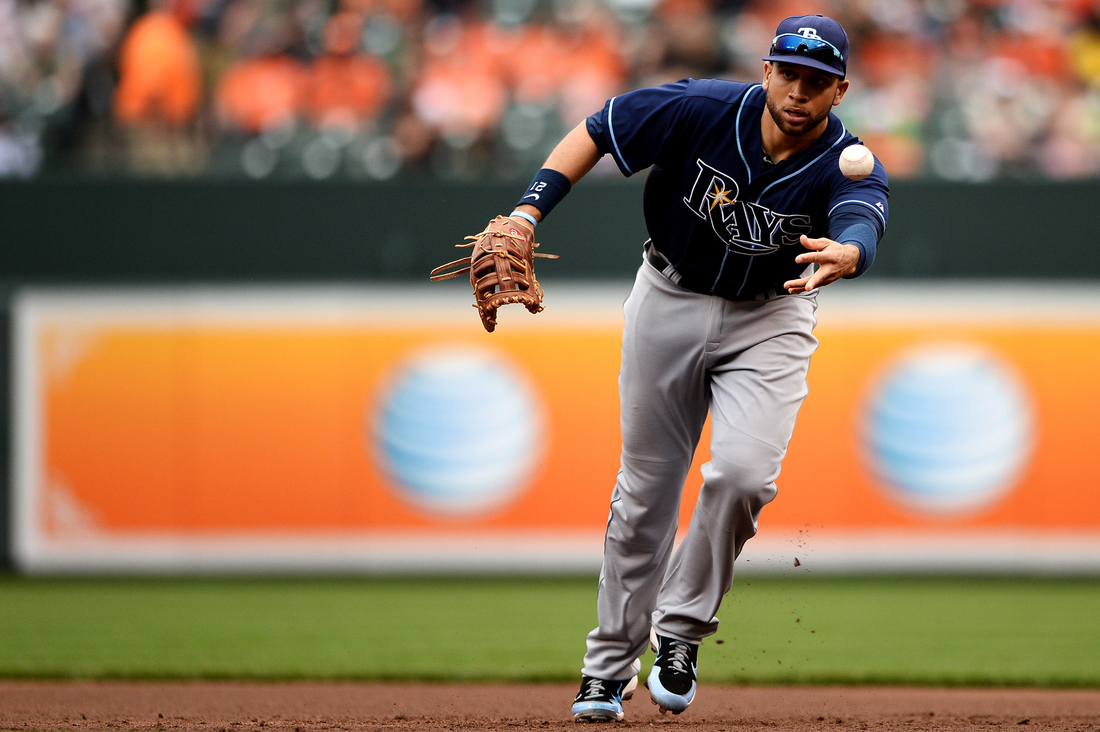 Longoria lauded Loney earlier in the off-season, crediting the returning first baseman's, "calming influence, the way he plays the game, the way he cares about the game, just everything in general." With no disrespect to the likes of Carlos Peña and Casey Kotchman, Longoria said Loney is, "probably the best total package I've played with over there at first," via mlb.com.

Peña was never a poor defender, but where he was paid to slug home runs, Loney's ability with the glove was enough to merit three years of confidence from the front office -- who I would like to note, have detailed systems to track defense we can only dream about. Perhaps that was an influencing factor.

It's not fun to just ask everyone to trust the office's process, though. What do we know of the player?

Loney is adventurous with his range (averaging over 31 plays out of zone per season), deliberate in his decisions to track down balls Zobrist would be fine to field (often leaving the pitcher to cover first base), and strong with his throws when necessary (starting a league-high 16 double plays last season).

During the Winter Meetings, Joe Maddon and Andrew Friedman each spoke of their desire to have a left handed first baseman and a batter who would excel against right handed pitching added to starting line up. James Loney meets that need, and provides the defense the Rays desire.

The question is whether his offense will hold. 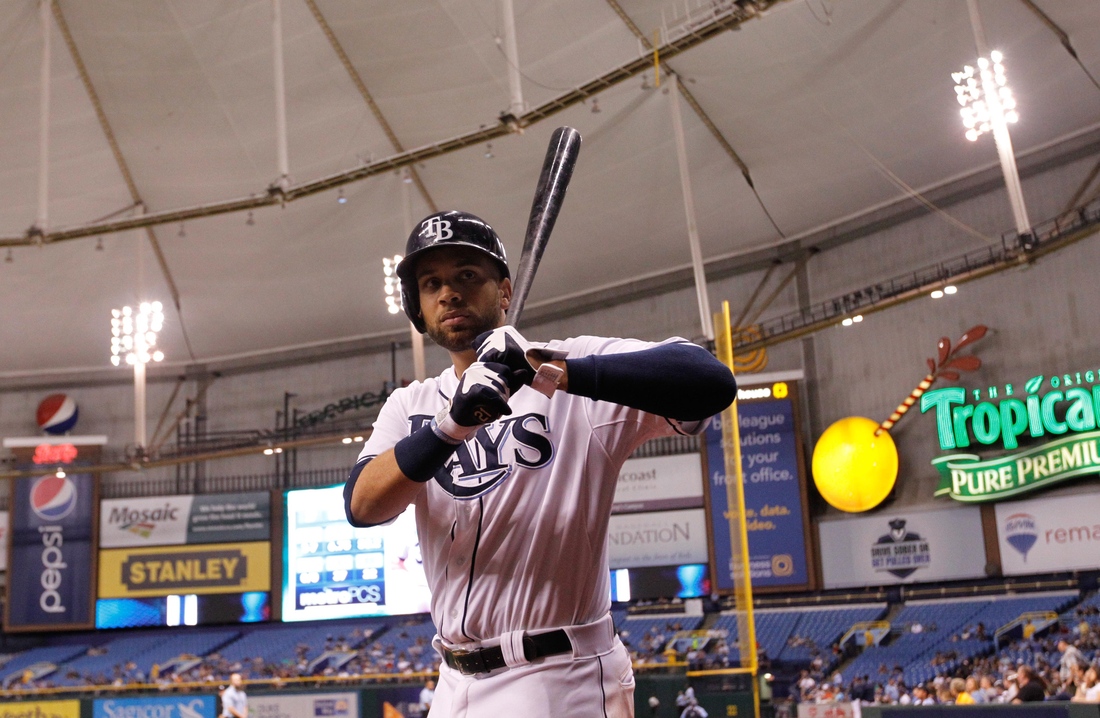 Loney was discarded in the Punto trade between Los Angeles and Boston as an expiring contract, and expectedly so. Loney was in the midst of his worst offensive production in his career. No one blinked at the cost when the Rays brought in the glove-first defender for one year and $2M.

What people didn't expect was a renaissance.

James Loney is quite the opposite of Peña the power hitter. After struggling mightily to hit for power in 2012, Loney adjusted his swing to bat lighter with better timing, changing his focus to walks, singles and doubles. He admittedly had a rough 2012, but was able to use these adjustments to bring his performance not only back to career averages, but his best in six years.

However, acknowledging a rebound does not tell the whole story, as the true outlier is not his most recent season of success, but his year of struggles.

Marc Topkin noted a few stand out statistics backing Loney's approach at the plate in this Sunday's Tampa Bay Times:

He had the highest percentage of line drives last season (29.8 percent of batted balls) among all hitters who qualified for the batting title. He had the lowest strikeout rate (1 per 7.7 plate appearances) of all first basemen; only five players hit as well (.299) and fanned at a lower rate. He led the Rays in hitting with runners in scoring position (.310) and with two strikes (.230). [tampabay.com]

If you were to eliminate the noise of the extremely productive May and unproductive August, and extrapolate the other months' performance over the entire year, Loney would have been able to produce a 122.76 wRC+. 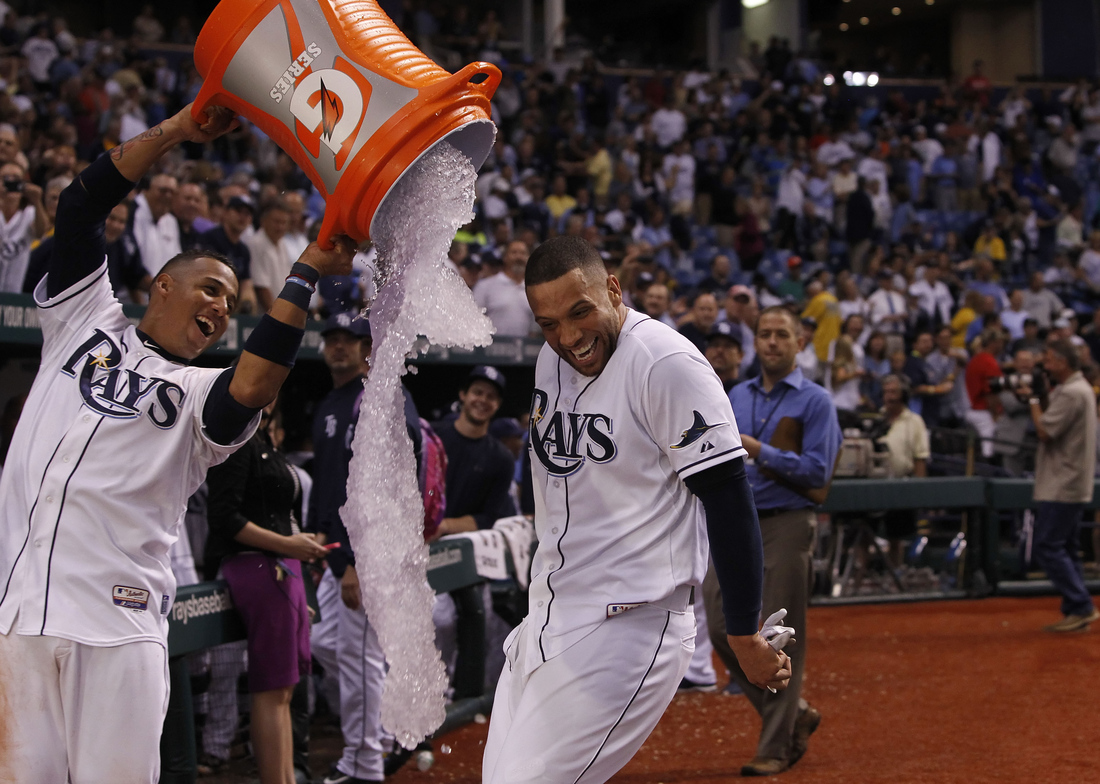 Concluding thoughts on the signing:

- The most recent one-and-done Rays reclamation projects on offense have been Casey Kotchman and Jeff Keppinger, who promptly went to other teams for nice contracts and were uninspiring in their offensive production. The Rays must have confidence that Loney's change in approach at the plate is more real, more tangible, and more likely to continue, as they've made a three year's commitment to him where they let the others walk.

- The biggest sign of Loney's changed approach was a career high 29.8% line drive rate, the highest mark of any first baseman last season. While all statistics will go through random variations, LD% is less volatile than batting average on balls in play, which it holds a considerable amount of sway over. That's a part of why he was able to maintain his consistent production throughout the year.

- Defensive metrics are rather imprecise when it comes to two positions in particular: first base and catcher. This off-season, we've seen the Rays make two major acquisitions on long term deals at each of those positions, trading for and then extending Ryan Hanigan, and giving three years to James Loney when others only offered two.

- As many have noted, the free agent classes for first baseman in the coming seasons is rather uninspiring. Making a commitment to Loney for three years is even more valuable when considering the best available next season just might be Corey Hart and Michael Morse all over again, but a year older with the same injury concerns. Locking up Loney now is a bet against poor free agent classes in the future.

- Just something to be on the look out for: one severely underrated aspect of Loney's game is his bat flip, seldom seen in highlight videos, but captured for our delight in pictures (here, here, here). Sometimes he takes off running and just lays the bat on the ground mid-stride, but when Loney gets passionate he lets it fly.

- All of this is to say: Welcome home, James Loney. We're more than excited to have your seldom used grin back at the cold corner. Feel free to break that out and warm our hearts more often over the next three years.