No DeAndre Jordan .gif this week, but there are more players to keep an eye on

We're close to wrapping up our 2013 review with the lats of the right-handed relievers. Last week I talked about how most of these players aren't really prospects, but I have to admit it felt like there were more interesting players writing them up this week.

There's not much to be found about Kimborowicz, but since he was drafted out of Everett College in Washington, it's probably safe to assume Paul Kirsch scouted him. His numbers didn't stand out at all, but he provided Princeton with some flexibility pitching in relief and also starting a couple games on doubleheader days.

Linsky stayed healthy in 2013, but he remained pretty unspectacular for a college reliever drafted in the second round three years ago. His strikeout rates improved from being total disasters in last year's injury plagued season, but both numbers are still pretty average.

The meager strikeout rate would be less of a concern if he was generating ground balls the way he was supposed to with his sinking fastball, but that doesn't seem to be happening either. Maybe being another year further removed from his shoulder injury will help out.

I don't know if anyone doubted that Lueke could dominate minor league batters, but this was maybe his best season. His 35.5% strikeout rate was the highest in his career in a significant amount of innings, and while his walk rate was a bit above his career average, he still showed good control.

Lueke's time in the majors has not been quite as successful, but it's only 57.1 innings spread over three seasons. He's now out of options and will be in a fight for a spot in the bullpen.

The Rays signed MacDonald as an undrafted free agent from Hawaii, but he was only able to make seven appearances because he missed about two months with an injury. He did well in his very limited innings, but the Rays released him after the season.

The Rays signed Mortensen out of an indy league late in the 2013 season, and he pitched very well in his first experience in affiliated baseball. It was obviously a limited amount of innings, but in his second game with Charlotte, he started and threw seven scoreless innings. With an injury or two on the staff, he was a key piece in Charlotte getting back to the playoffs.

Mortensen was a very good NAIA pitcher, but as you might imagine, scouts aren't exactly knocking down the door going after a short righty NAIA pitcher with a below average fastball. However, his velocity reportedly improved since his amateur days. He will pitch most of next season as a 26 year old, so while it's probably premature to call him a sleeper prospect, it'll be interesting to see how he fares in a full season.

Mujica was a key signing in the Rays' July 2nd, 2012 class, and they were perhaps a bit more aggressive than usual bringing him to the U.S. as a 17 year old. He certainly wasn't out of place. His strikeout rate was nothing special, but it's always encouraging when a young pitcher is able to come here and throw the amount of strikes he did.

He's listed as a reliever here, but that's just because of how the Rays handled his workload. With the money invested in him, Mujica is clearly a starter though. Last year, Princeton's innings leaders were at or just above 60, and I see him doing that in the Appy League next year.

Nevarez had a decent start to his season, but shoulder injuries prevented him from pitching most of the season. The Rays signed him out of indy ball halfway through 2012, and he would pitch 30 total innings for the organization.

He's now in minor league free agency, and right now his claim to fame is being traded to Houston when Texas reacquired Ivan Rodriguez in 2009.

A decade ago, Paduch was a top 30 prospect with the Reds, but the Rays originally got him in 2011 after five years bouncing around indy ball. His start to the season wasn't good, like pretty much all of his time in Triple-A. Instead of being re-assigned to Montgomery at the beginning of June, he chose to retire. He finished with over 1000 career minor league innings.

Paredes made his U.S. debut this year and continued to pitch effectively like he did in the Dominican Summer League. His strikeout rate spiked, and he limited right handed batters to a .368 OPS.

Quate looked like a possible sleeper prospect after an outstanding 2010 season with Charlotte, but injuries, including one to his shoulder, slowed him down. He only threw 8.2 innings over the last two seasons, including the 6.2 this year that were obviously awful. The Rays cut him in May.

Entering 2013, Quinonez was coming off maybe his best season as a professional as a swingman on Hudson Valley's staff. He got another chance in the start when Bowling Green decided to go with a six man rotation, but an injury limited him to 57 innings. He maintained his improved average strikeout rate, but his walk rate jumped back to double digits.

Quinonez was eligible for minor league free agency, but he re-signed with the Rays shortly after the off-season began. 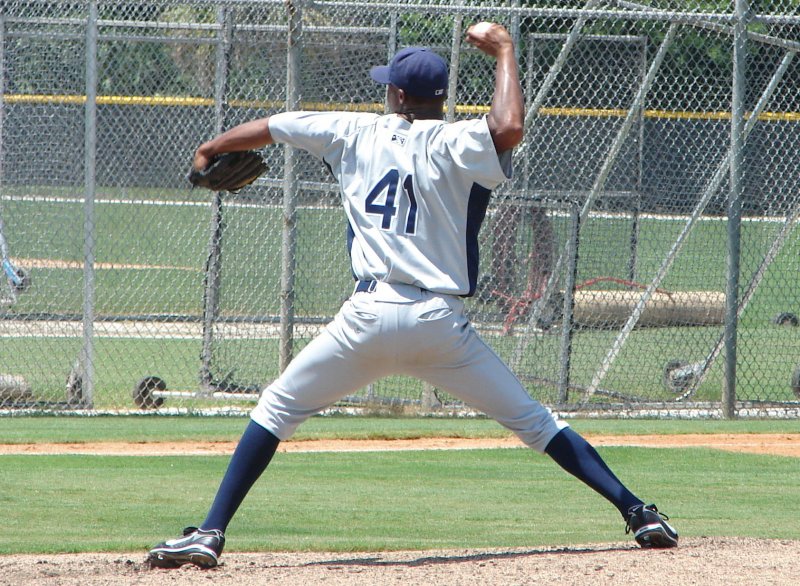 After signing July 1st, the veteran reliever Ramirez made a couple tuneup appearances with Charlotte before pitching a handful of innings for the Bulls. He pitched well for them, but he was released at the end of the month. He didn't pitch again in 2013.

I thought Ramirez was one of the more interesting later picks in the Rays' draft, but his pro debut was a mixed bag. He did a nice job throwing strikes for a young pitcher, but at 6'1 and 205 pounds, his average fastball may never tick up, making it harder to improve his strikeout rate. Like Mujica, he should get into a rotation next season.

Ramsey is the kind of college arm the Rays like to take a chance on. In college, he was a two way player who also missed time with a forearm injury, so they hope he can improve completely focused on pitching. He can get his share of strikeouts with a mid-90's fastball and effective curveball, but he needs to cut down on his walks.

Ramsey was effective in a brief Arizona Fall League stint, striking out 20.6% and walking 8.8% of his opponents in 8.2 innings. His fastball averaged 92.99 MPH in a game with Pitch FX available.

Reavis went on the DL before his pro career even officially started, but he came back and pitched well for Hudson Valley. He limited righties to a .500 OPS.

Regalado is a bit of an interesting case because he's the rare undrafted free agent signing out of high school. In his case, it's George Washington in Manhattan, where former Rays legend Manny Ramirez and former Mr. Don't Count Him Out, Alibay Barkley.

Rays Colored Glasses goes over his amateur career much better than I could, but the gist of it is injuries cost him a chance for scouts to see him, and he went undrafted. Regalado wanted to play professionally rather than go to college, and the Rays added a potential deep sleeper last off-season. His pro debut was okay.

Rodriguez was always an intriguing sleeper in the organization, but injuries and durability concerns completely derailed his career. After throwing 106.1 innings in 2010 as a 20 year old, a shoulder injury kept him out of action for half of 2011. That would be a career high as he only pitched 88 innings total from 2011-2013. He signed with Kansas City after hitting minor league free agency.

Sandoval spent a lot of time in big league camp with the Rays, and he went on to have a nice season in the upper levels of the organization. In fact, it might've been the best season in the last decade of his career. His strikeout rate was average, but he was able to throw strikes and generate ground balls. He even started a couple games for Durham.

He's back in minor league free agency after spending two seasons in Mexico. His performance may merit a minor league with with a big league spring training invitation.

While a lot of teams are wrapping up the last round of the draft taking sons and nephews of front office personnel, the Rays end up with a bit of a sleeper.

Sawyer is the rare relief prospect, but he has quite a bit to refine to reach St. Petersburg. With two potential plus pitches, that strikeout rate isn't a fluke. With a wild delivery leading to control problems, the walk rate isn't either. If he can harness his mid-90's fastball and power curve, he could pitch in the late innings.

Schreiber was a potential impact player at Purdue, but Tommy John surgery and difficulties returning from it left him undrafted in 2013. The Rays picked him up in August, and he made four appearances for Hudson Valley. It's worth keeping an eye on him as he gets healthy.

Sidhu struck out 93 in 82.2 innings in his platform season at Sonoma State, but he wasn't as fortunate as a professional. He allowed runs in five of his six appearances before going on the DL for the rest of the season.

Suero spent his second straight season with Charlotte, and although his strikeout and walk rates improved to slightly more acceptable levels, it was still not enough to keep the Rays from cutting him this off-season. He struggles against righties and lefties alike, so I don't know if I see him catching on anywhere else.

Swilley got a six-figure signing bonus out of high school in 2009, but he was limited by injuries and never made it beyond either rookie affiliate. He only made three appearances for the GCL Rays before they threw in the towel and released him.

Tzamtzis probably got a bit of attention at NC State because despite his struggles, scouts would be coming out to see Carlos Rodon. The Rays took him in the 32nd round, and even though his walk rate was clearly too high, it's still an improvement from when he walked more than he struck out in his last season as an amateur.

Van Meter started the year in the Texas organization, but after he was released early in August, the Rays picked him up to add depth to Montgomery's staff. He didn't pitch particularly well, but that's not surprising since he only had nine prior career appearances there. He's back in the minor league free agent pool.

Yates had another impressive season, and it earned him a spot on the 40 man roster. Among minor leaguers with 50 innings in 2013, he was eighth in strikeout rate. That list has players of all ages at different levels, but it's clear that he has the stuff to get batters out. For those not interested in clicking, former Rays farmhand Zach Rosscup was number one.

Despite his size (5'10, 170 pounds), he can dial his fastball up into the mid-90's and get swings and misses with it. He'll have a chance to win a spot in the Rays' bullpen this spring. That's not bad for an undrafted free agent signing from Yavapai College. 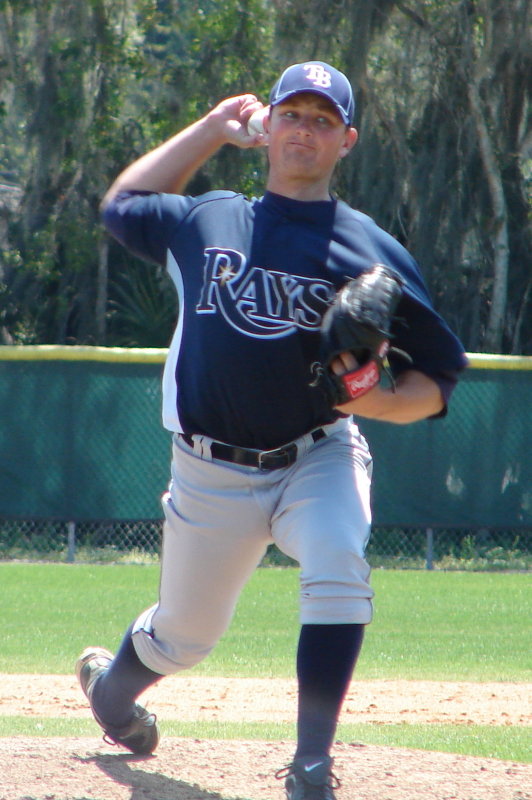 I nearly missed Wade entirely listing players in the organization, and that would be unfair to such a key player in Rays history. He pitched for three Triple-A teams in 2013, but he wasn't nearly as good as he was in 2011 when he opted out of the organization and went on to have a good year for the Yankees. He signed with the Royals.