Finding the 25th man: thoughts on Lobaton and Free Agents who could replace him

The Rays roster is shaping up.

Share All sharing options for: Finding the 25th man: thoughts on Lobaton and Free Agents who could replace him

If the season were to start today, the Rays roster would be as follows:

After the departure of Kelly Johnson to free agency, and Jeff Keppinger the year before him, I believe the Rays are on the look out for another plus defender to become their 25th man on the roster. Someone malleable to many roles around the diamond, able to back up many positions.

Jose Lobaton is likely not the answer, though he would be penciled in today. Lobaton has experience practicing at second base from his days in the Padres system, but has played all but one game in his career behind the dish.

The native Venezuelan has value in that he's a switch hitter, which is ideal in a pinch. Lobaton batted a career high 103 wRC+ last season, comparable to the league average 97 for catchers, and his now career average of 87. Lobaton has been constantly improving his game, especially his ability to track down baserunners, but his highest value might be on the trade market.

There was a run on catchers earlier in the season, and Lobaton's four years of control remaining could net the Rays a decent prospect or two this winter. It would also open up the 25th man to be that desired utility fielder once again. 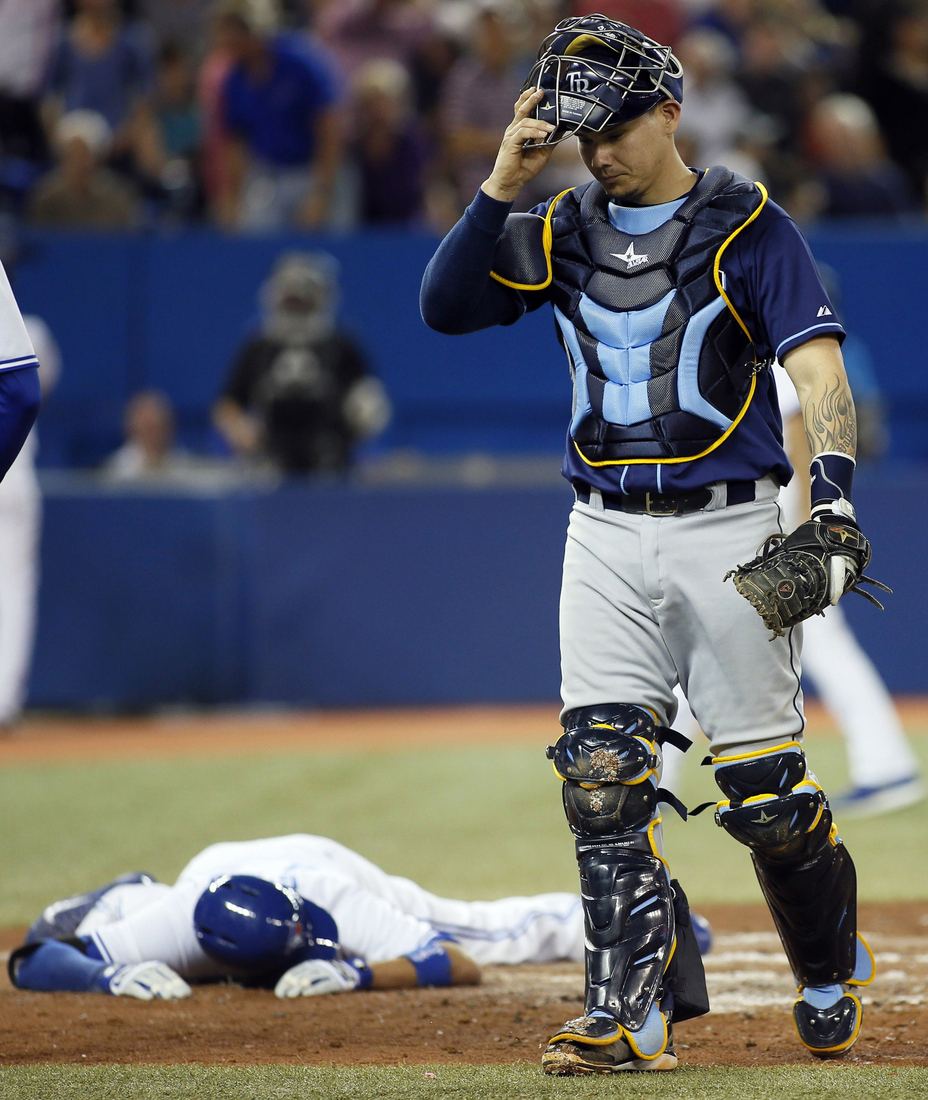 The Rays have been connected to many names for their final bench slot this winter, including Mark Ellis -- who reportedly signed with St. Louis -- and Juan Uribe -- who returned to the Dodgers, both rumored on Sunday afternoon. The only other utility player on the free agent market the Rays have been tied to thus far is former Twins infielder Jamey Carroll, who's still trucking along at age 40.

Source: "Lots of conversations" ongoing about Jamey Carroll. TB, TEX, CLE + "a few more" are involved in trying to sign him.

There are two corner infielders the Rays have been connected to that could be interested in signing with the Rays: Eric Chavez batted a 120 wRC+ against right handed pitching over the last three seasons, averaging a little over 200 plate appearances per year, and is a great option off the bench. Another role of the 25th man could be to platoon at designated hitter with Matt Joyce, in which case 30 year old Mark Reynolds fits the bill, with his career .238 ISO off southpaws. Unfortunately, defense limits both of these players.

Priorities in a 25th man seem to be an ability to play multiple positions, a neutral projection at the plate, and now speed -- which Maddon and Friedman are on the record as having an interest in. The Rays' steals nearly halved last season, which the likes of Kelly Johnson and Luke Scott didn't help. Neither would Jamey Carroll or Eric Chavez.

Also on #Rays: Jamey Carroll and Mark Reynolds are among the FA they still have interest in.

As far as free agents are concerned, the only other player I've seen the Rays recently connected to is Cuban free agent Aledmys Diaz, who at age 23 is available to be signed without an impact on the international signing bonus pool. He has at least ten suitors around baseball, and is expected to give a showcase in late January (via JesseSanchez). He will be eligible to sign with a team in February, and could be expensive if a bidding war ensues.

A few speedy infielders are still available on the market. switch hitting Alexi Casilla (45 SB over last three seasons), lefty Chris Getz (46), and righty Jayson Nix (23) are all more than adequate infield defenders, and could hopefully be landed on a minor league deal. However, with the signing of Mark Ellis in St. Louis, the free agent utility infielder pool lost it's final player in the top tier, and with teams like the Yankees and Orioles still in need of a primary second baseman, there could be a run on infielders in the near future. Brian Roberts is rumored to be already on the plane to New York.

Perhaps the best route for the Rays would be via trade. Plenty of teams will continue to have desperate need of a quality backstop, and the signings of Hanigan and Molina have made Lobaton expendable. Instead of trading him for prospects, perhaps this could be an opportunity for the Rays to turn a surplus into another utility infielder, hopefully someone cut from the same cloth as Sean Rodriguez. The front office also has bullpen pieces that could be moved (Lueke, Ramos come to mind), or have the potential to return a 25th man in a David Price trade. This will likely be the first domino that has to fall before Friedman will know what direction to go in.

The Rays will find their 25th man. The only question is where.