It's all about the swing.

Share All sharing options for: Will Ryan Hanigan rebound?

Now that the glow of acquiring the much-loved-in-Cincinnati Ryan Hanigan has dimmed, it's time to start thinking about what his presence will mean for the Rays. Yes, he's an expert game-caller, framer, pitch-blocker, and thrower. Yes, he sounds like a fabulous clubhouse presence. Yes, he struggled with injuries last year. That doesn't change the fact that in 2013 he was a pretty horrible hitter.

Why the drop? What went so wrong in 2013? For a start, I went to Jeff Zimmerman's www.baseballheatmaps.com. All heat maps are from a catcher's perspective. They compare Hanigan in 2010-2012 to Hanigan in 2013. On a swing map, hotter colors mean that he swung there more often in 2013, cooler colors mean that he swung there less often. The results map take a look at run values for each pitch. 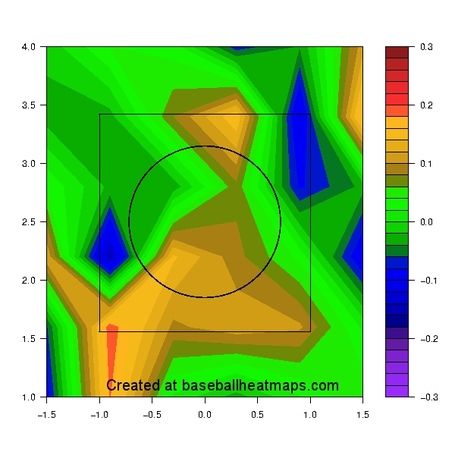 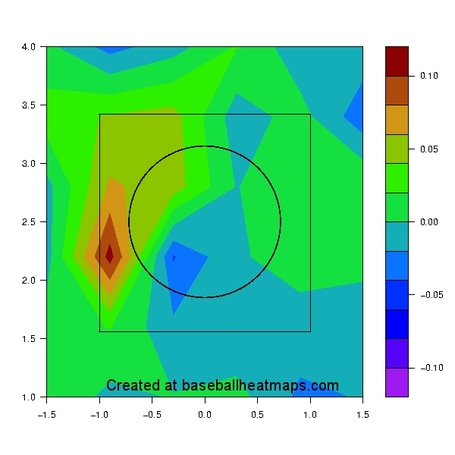 That's pretty interesting, although I can't say I know exactly what it means. Hanigan has taken more pitches in on his hands, and at the same time he's also hit those pitches better. Meanwhile, he was slightly more aggressive over the rest of the plate, with worse results. The other area where he was more patient, the upper and outer corner of the strike zone, his results were the same in 2013 as in years past.

What should you make of this? I'm not sure. Hanigan has never been a power hitter (.081 career ISO), and injuries 2013 sapped any power he might have had. He's always been a guy for whom swinging the bat carries very little reward, and with a sprained wrist and oblique, Hanigan appears to have successfully compensated by being even more selective than usual on borderline pitches. When a pitcher throws a fastball right down the middle of the plate though, no veteran adjustment is going to take the plays of a good swing -- hence the 50 wRC+ against righties. 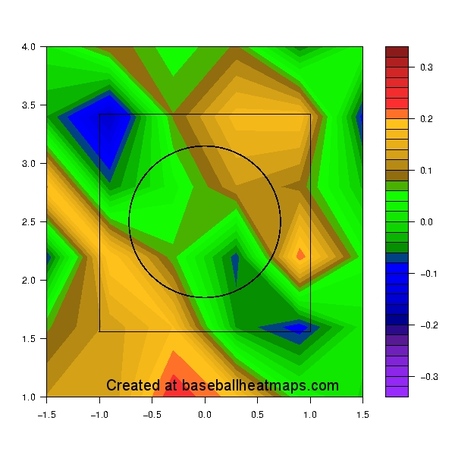 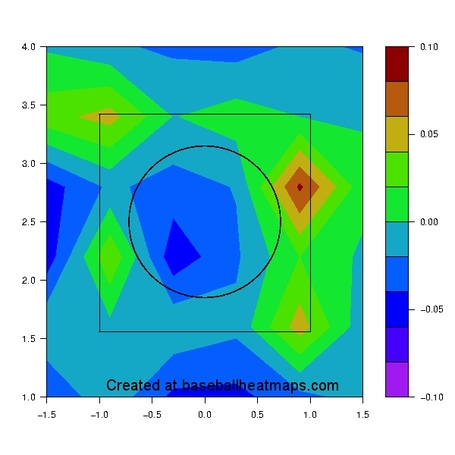 The picture against lefties is much the same, if a little less clear. Hanigan took more pitches on some of the corners, and swung at more on others. Either way, though, his results were better or similar in those outside or borderline spots where his decision about whether or not to swing would matter most. A pitch down the middle, though, will almost always be called a strike if not swung at, and once again, any gains Hanigan may have made on the edges was more than offset by an inability to do much with pitches out over the plate.

What's the lesson? Ryan Hanigan knows what he's doing at the plate, as shown by his career walk rate (12.0%) being higher than his career strikeout rate (10.1%), but baseball is a difficult game, with only a small margin between success and failure. Hanigan's margin has always been smaller than most, so when age and/or injuries impeded his swing, major league pitchers were about to capitalize. The Rays gave him a three-year deal, so they're betting it was the injuries and not the age. Hope that they are right.