The Rays have released artist renderings of the new 360 degree walkway, which eliminated the batter's eye restaurant and extends walkways around the entire ballpark.

Renderings provide the first look at how this will be accomplished.

The walk way will pass in front of seating against the right field wall scoreboard, splitting the section into an upper and lower level, passing above the Ray Touch Tank, giving pedestrians an aerial view of the team's mascot swimming below. 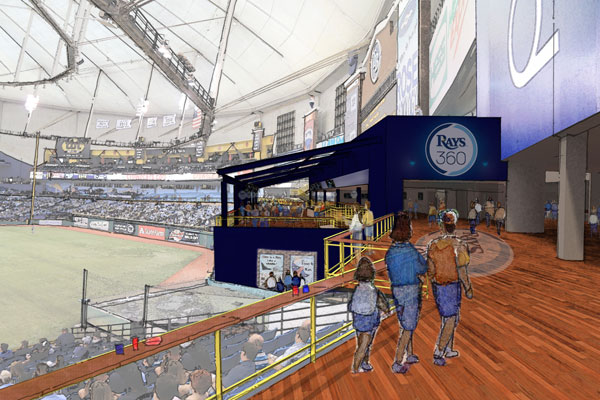 The Batters Eye will retain its shell, but without the glass walls.

To keep with MLB regulations regarding what is seen behind the pitcher from the batter's box, note that current renderings do have a dark wall in the center of the patio to meet MLB regulations. It is unknown if this will simply be a mesh wall that can be seen through, or a solid wall where the TVs are mounted to make up for a loss of sight lines. 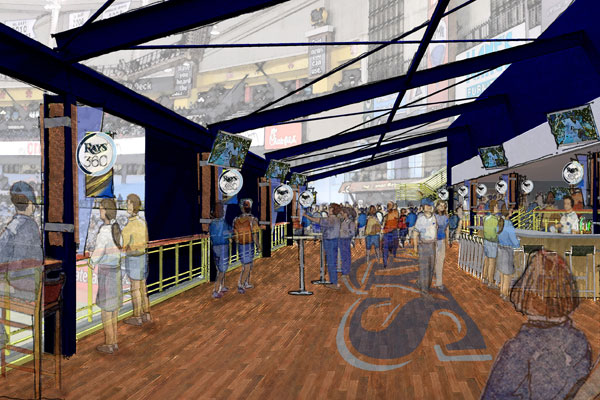 After continuing under what appears to be a glass-roofed, open air walkway, where a full bar will be stationed, pedestrians will be able to continue to left field seating on a walk way that passes below the Captain Morgan party deck. 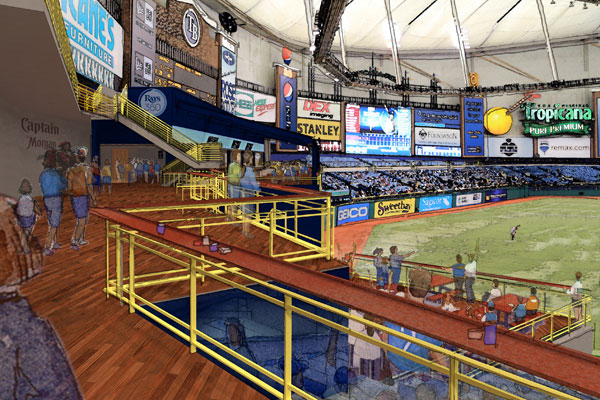 A new entrance will be added in right field, and the outfield walkway will have access for lower bowl seating via the escalators at the main entrance.

The project will result in the removal of approximately 3,000 seats, making the expected capacity for regular season games at Tropicana Field 31,042.

Be on the look out for more images as they are released through social media!

The Tampa Bay Rays are proud to announce a major upgrade to Tropicana Field that will significantly enhance the fan experience for the 2014 season.

The project will create 360-degree pedestrian circulation around the lower seating bowl at Tropicana Field. The improved circulation will provide easier access to and from ballpark gates, concessions and activity areas throughout the facility. Existing cross-aisles in the lower bowl will be extended from the left and right field foul poles to create a walkway lined with drink rails as it winds toward center field.

"These renovations reflect our constant commitment to providing a first class gameday experience at Tropicana Field," said Rays Principal Owner Stuart Sternberg. "A visit to the ballpark will be even more enjoyable because of these new features and attractions."

The renovations will also create a more dynamic experience in the area just above the center field wall previously occupied by the Everglades BBQ Smokehouse. No longer a walled- and glassed-in space set apart from the game, it will be transformed into a unique patio with open views of the playing field and new food and beverage areas easily accessible to all ballpark patrons.

A new deck overlooking the Rays Touch Tank will connect the patio to the new walkway at its right field entrance. A more traditional batter's eye structure, meeting all Major League Baseball specifications, will also be installed.

As a result of the renovation project, visitors to the ballpark will now be able to access the entire lower seating bowl directly from the escalators located at the main rotunda entrance of Tropicana Field.

"This project will significantly enhance the total ballpark experience," said Rays Senior Vice President of Development and Business Affairs Michael Kalt. "It will make it much easier for our patrons to navigate the ballpark, and allow them to enjoy the game from exciting new areas and dynamic new vantage points."

The project will result in the removal of approximately 3,000 seats, mostly to accommodate the new outfield walkways. Capacity for regular season baseball games at Tropicana Field in 2014 is expected to be 31,042.

The Rays partnered with award-winning sports architects Populous, who designed the renovations to the Rays spring training home at the Charlotte Sports Park, on the 360-degree walkways and creation of the new center field patio.

The current project builds on the more than $20 million the Rays have invested in Tropicana Field since 2006, including the creation of the Hancock Bank Club, major improvements to the interior of the ballpark, the installation of new video boards and sound system, as well as the addition of the Ted Williams Museum and Hitters Hall of Fame located in Center Field Street. 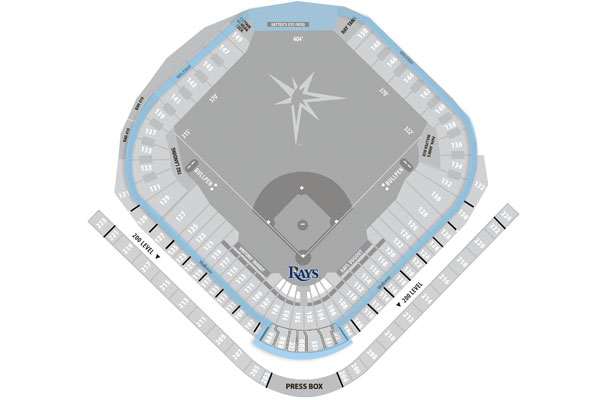 All above images via tampabay.rays.mlb.com.

We will update with more images as they come available:

And one more! #Rays pic.twitter.com/PHrdHdM2LF

Another shot of the construction, alongside a rendering of what the center field patio area will become. #RAYS360 pic.twitter.com/m5iH3TE3Ri