Is Yunel Escobar the best shortstop in the AL?

Share All sharing options for: Is Yunel Escobar the best shortstop in the AL?

Last offseason, nobody wanted Yunel Escobar. Except for the Rays that is. First, the Toronto Blue Jays dealt him to the Marlins in the mega swap that involved everybody the Marlins had splurged for the year before. Then, the Marlins sent Escobar to the Rays for minor leaguer Derek Dietrich, who proceeded to look largely overmatched in 57 games with the big league club before being sent back to Double-A. Even with the pricey Jose Reyes, the Jays and Marlins shortstops combined to produce just 0.4 fWAR.

While the decisions of the Jays and Marlins to part ways with Escobar look pretty bad in retrospect, the moves were understandable at the time. Escobar produced a .career worst .253/.300/.344 line for a 74 wRC+ and just 1.5 fWAR. In addition, there was the eye-black fiasco that earned him a three game suspension. To boot, Escobar also brought a reputation, perhaps undeserved, as a bad clubhouse guy that dated back to his days with the Atlanta Braves. Escobar's first organization traded him in the middle of his fourth season after he had produced 10 fWAR in his first three.

In any case, the Rays are glad to have him. Acquiring Escobar allowed Ben Zobrist to move back to his natural position of second base. And those clubhouse concerns? Manager Joe Maddon lauded the positive energy Yunel brought to the team.

For just $5 million, the Rays got great production out of the 31 year-old shortstop. Though his .256/.332/.366 line might not look too impressive, it comes out to a 100 wRC+ which was above the AL average for shortstops. Throw in a UZR rating that was matched only by the light-hitting Alcides Escobar, and Yunel totaled 3.9 fWAR, tops among his AL counterparts. 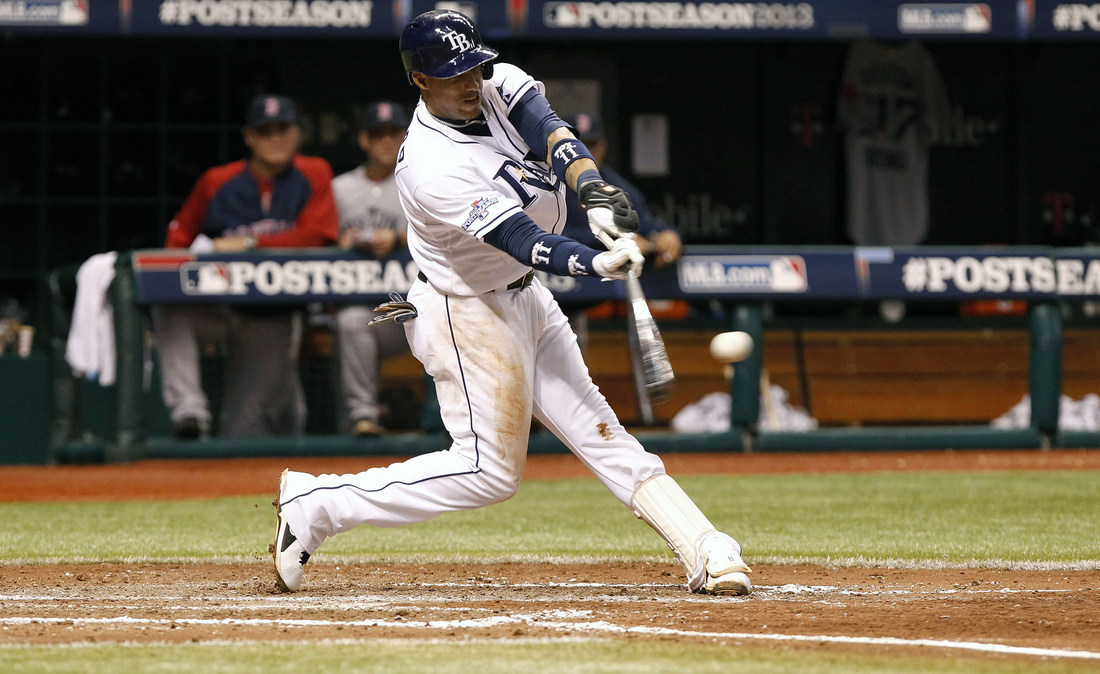 While Rays fans might think of Escobar as a glove-first player, he possesses a career .350 on-base percentage. Though that mark is down to .315 in the past two seasons, he had a .369 on-base percentage as recently as 2011. He is an excellent contact hitter, as his career 11.3 percent strikeout rate shows. In addition, he has walked in 9.1 percent of his plate appearances, and his 22.5 percent O-Zone swing rate reveals an excellent eye.

Much of his offensive decline the past two seasons is due to a lowered BABIP. From 2007-11, Escobar had a .314 BABIP. The last two years, that mark has fallen to .277. Of course, a hitter's BABIP skill tends to decline with age, and Yunel is on the wrong side of 30. Still, look at this table, which compares his xBABIP with his actual BABIP.

As you would expect after seeing this chart, his batted ball rates haven't changed. xBABIP isn't perfect, and there's a lot of noise in stats like Line Drive rate. We don't have what we really need to look further into this.

I don't know why the Freedom of Information Act even exists if it doesn't give us free public access to hitF/X and fieldF/X.

Still, there should be hope that Escobar's BABIP can bounce back to his 2007-11 levels, which would make him a 110-115 wRC+ hitter. Even without a BABIP bump, Escobar might be the best shortstop in the AL in 2014. Here's a look at the 2014 Oliver Projections for the top 2013 AL shortstops. All projections are based on 145 games and 600 plate appearances.

Escobar is projected for the third-most fWAR among AL shortstops even after assuming equal playing time, and a BABIP projection of just .284, which, with the exception of the flyball-hitting Hardy who has a .273 career mark, is the lowest of his above counterparts.

These projections aren't perfect, but they do a very good job at identifying a player's talent level. Injuries are also a factor. Reyes has averaged just over 100 games the past five seasons, and Lowrie's injury-free 2013 season was a first. Escobar on the other hand has played at least 133 games every year. Also, young guns Xander Bogaerts and Francisco Lindor could enter the AL shortstop mix, and Mariners shortstop Brad Miller could make a splash in his first full season.

He doesn't have the upside of a healthy Reyes, and 2014 might be the year when Andrus bursts into stardom, but Escobar could very well be the best shortstop in the AL once again. And did I mention Yunel comes at one-third the cost of those two guys?

General Manager Andrew Friedman has made several good trades since taking the helm in 2005. Swapping Dietrich for Escobar is one of his best.