Continuing where we left off yesterday.

Guerrieri was mowing down batters in the Midwest League until elbow discomfort ended his season in July. He required Tommy John surgery, and he'll be missing most of if not all the 2014 season. The hits kept coming in the following months though, and in October it was announced he would be suspended 50 games (which will be served when he is still injured) for a second positive test of a drug of abuse. This is believed to be the organization's ∞ suspension the last few seasons.

Maybe his strikeout rate was a little lower than some expected, but reports on his stuff were still generally positive. He continued to show that he can throw more strikes than expected, and he did a great job keeping the ball in the ballpark again. When he comes back in 2015, he should still have a number two or three starter ceiling.

Entering the season, Odorizzi was probably already major league ready, but the year in Durham due to the organization's depth in the rotation probably wasn't a bad thing. His stuff will never be described as overwhelming, yet he still managed to overmatch a lot of International League hitters. His strikeout rate and walk rates were both better than their counterparts in the Pacific Coast League in 2012.

Odorizzi, as of right now, is probably ticketed for Durham again. He could make 30 starts in the majors for a team with less depth, but unless David Price gets traded, there's no room for him until someone gets hurt. Maybe he's a bit homer-prone since he doesn't get many ground balls, but making half of his starts at Tropicana Field will hide that a bit. He should be able to provide 200 reliable innings annually.

Last month, Hahn was added to the Rays' 40 man roster. He was definitely at risk of being taken in the upcoming rule 5 draft. Here's what I wrote then:

Hahn, 24, didn't make his pro debut until two years after he was drafted in 2010. The results on the field have been worth the wait though. In 67 innings with Class A-Advanced Charlotte, he had a 2.15 ERA and 1.09 WHIP with a 22.9% strikeout rate and 6.5% walk rate. The Rays have been cautious with his workload since he had elbow surgery in 2010, but he still spent a month on the disabled list late in the season with arm soreness.

Hahn throws two fastballs in the mid-90's, including a two-seamer used to generate plenty of ground balls. His breaking ball and changeup both show promise. His ceiling is high whether it comes as a starter or reliever.

He threw 69 innings (including his rehab) last year, 17 more than 2012. At this pace, he'll be prepared to throw 180 innings when he is 30 years old. The Rays should continue developing Hahn as a starter, but if they need a potential impact arm out of the bullpen late in the season, he could be the man. 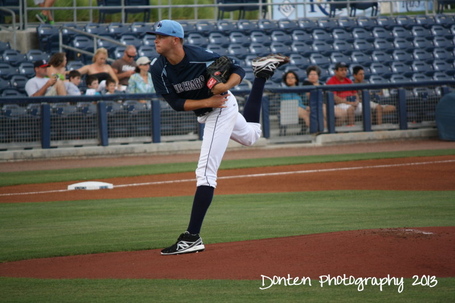 In the New York-Penn League in 2011, Markel was a bit of a sleeper prospect with really good stuff. His strikeout rates never really matched the reports of his stuff, but at least in 2012 he managed to throw more strikes. That all came apart this year with Charlotte. His strikeout rate inched back to 19%, but he was hit hard (.298 BAA and .464 SLG).

On July 10th, he experienced shoulder pain and would only make one more appearance that season. He struggled for much longer than just those two starts, but it wouldn't be the first time a player wasn't completely truthful about an injury's timeline. Whether or not the shoulder pain had anything to do with his performance last season, the results are going to have to be better in 2014.

Like his older brother A.J., Aaron Griffin is a strike thrower, and that helped him perform well in his pro debut. He got it done with average stuff, including a high-80's fastball. With his control, durable frame that should be able to handle a big workload and deception in his delivery, he has a shot to reach the majors as a spot starter or long reliever.

A college pitcher doing well in the New York-Penn League isn't groundbreaking territory, and at his age they may want to accelerate him to Charlotte next year to see what he has.

Kelly reached Durham for the first time in his career in 2013, and he pitched well enough to earn an assignment to the Arizona Fall League. Despite making nine appearances, he didn't make any in a Pitch F/X stadium unfortunately. His time there was okay with nine strikeouts and three walks in 11 innings, but he allowed a lot of runs with 18 hits.

His strikeout rate with the Bulls was the highest it has been since his pro debut in 2010, but he still needs to cut down on his walks a bit. Kelly's fastball is only average, but his changeup is a solid pitch that can help him get outs. He wasn't protected from the rule 5 draft, but I'd expect to see him back in Durham next year.

Lopez spent most of his first entire year in a full-season league in the rotation, first when Bowling Green decided to go with a six man rotation and then when Guerrieri went down. He wasted no time reaching his first All-Star Game with the best season of his career. This was the highest strikeout rate of his career, and his walk rate wasn't too far out of line with the rest of his career. It was a solid performance, but as a 22 year old in the Midwest League, he'll have to prove himself further at higher levels.

Marquez skipped right over the GCL in his first season in the U.S., and he's one of the more interesting arms in the lower levels. He got a $200,000 bonus out of Venezuela, and although he's not huge at 6'1 and 190 pounds, his fastball velocity increased a bit early in the season before he wore down. While an 8.9% walk rate isn't great, it was probably a bit better than expected.

Since Marquez is still really young, it's not a big deal if he starts in extended spring training again. He has to work on getting stronger, and we all know how patient the Rays are ratcheting up the workload of young pitchers. His changeup is advanced for his age though, so it wouldn't be the biggest surprise in the world if he pitched with Bowling Green at some point in 2014. 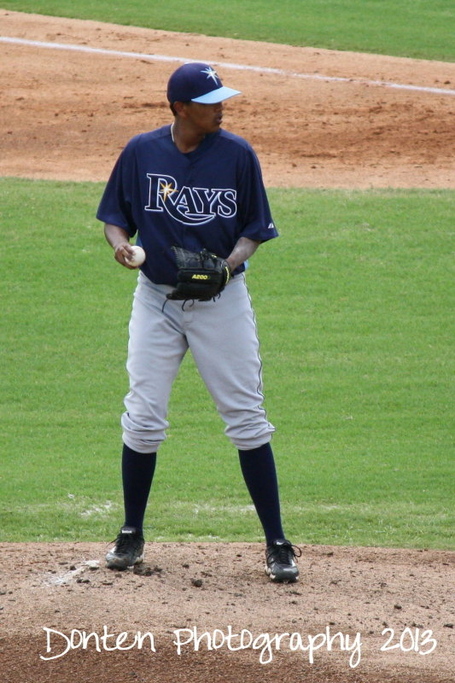 Martin hasn't pitched in the majors since 2010, and he thought he would get that chance this year. He got one day of service time, but he never pitched and was promptly designated for assignment. Disappointment with how the Rays handled him late in the year likely means he'll be headed elsewhere in minor league free agency. He was named International League Pitcher of the Year after posting what might've been his best season in Triple-A over the last three years. In an organization with less depth, that might've earned him a chance to actually pitch in the majors.

Mateo hit minor league free agency like Martin did, but he chose to re-sign with the Rays. He threw his second career no-hitter in August, but other than that it was a pretty ordinary season for him. His strikeout and walk rates were virtually identical to his 2012 season with Charlotte, with the only difference being a much lower BABIP. His 26 starts and 153.1 innings were both career highs, so at the very least he should be able to provide decent innings in either Triple-A or Double-A next year.

Pruitt was the quintessential senior sign in June; he was cheap, his upside isn't very high, and he hit professional baseball ready to perform. He threw a ton of strikes despite throwing a spike curveball, a notoriously difficult pitch to control. His challenge is going to be maintaining that strikeout rate in future seasons. His fastball rarely even touches 90, and his command is going to have to be perfect to keep getting away with that.

Rodriguez spent all of his second season in the U.S. with Princeton and continued to excel throwing strikes. There seems to be no scouting information on Rodriguez available, so all we have to go with here are the numbers. He does a good job limiting home runs and has only allowed three in 112.2 innings in the U.S. 5'11 righties don't have a tremendous track record as starters though, so he'll have to get bumped up to full-season ball for further evaluation.

Schultz probably fits best in the bullpen because of his smaller size (5'10, 190) and arsenal. For about half of his debut season though, he worked as a starter and did pretty well. He can dial his fastball up into the mid-90's in short bursts, and he can choose between one of his two breaking balls in relief. His OPS against in relief was nearly 100 points better than as a starter.

Injuries have significantly limited Shull in his pro career. He was drafted in 2008, but he's only thrown 201.2 innings since he was selected by the Rays. That includes two DL stints the last two years, most of which were due to an arm injury he suffered at the end of last year that carried over to 2013. Just getting on the field consistently would be nice to see.

Slaton's solid pro debut came as a surprise because he wasn't particularly good as an amateur at San Jose State. Despite that, he signed after his junior year when he was picked in the 37th round. In his collegiate career, he struck out 80 and walked 62 in 135 innings, but he improved on both of those rates with Princeton. Clearly the Rays saw something they could adjust for him to have more success. What that is, I don't know because there is no scouting information available for him on the internet.

Like Mateo, Suarez was briefly a minor league free agent, but he chose to re-sign with the Rays. Perhaps that's because of the patience the Rays have shown with him throughout his injuries. He once had Tommy John surgery, and he was placed on the disabled list after two appearances in 2013 due to oblique injury. He never appeared again. He threw 125.2 innings in 2012 with Charlotte, and that was his only full season.

In the past, his sinking fastball sat in the low to mid-90's with a curveball and changeup that both could be average or better pitches. He always threw a lot of strikes, but if he's not on the field, he can't show any of this.

Thompson's second season with Montgomery looks better than his first, but I'm not sure how much changed other than a 57 point drop in BABIP. The lack of strikeouts over the course of his career would indicate his breaking ball has never improved since he was a second round pick in 2010. With his decent fastball and changeup, he's been able to maintain even splits against lefties and righties the last two years, and maybe a move to the bullpen where he can drop the third pitch is in order.

BA's J.J. Cooper speculated that Thompson could be of interest to teams in the upcoming rule 5 draft, but I don't see it. His upside isn't high enough to warrant a losing team to keep him on the roster all year, and he's not so clearly ML ready for him to interest a competing team looking to fill a small role. 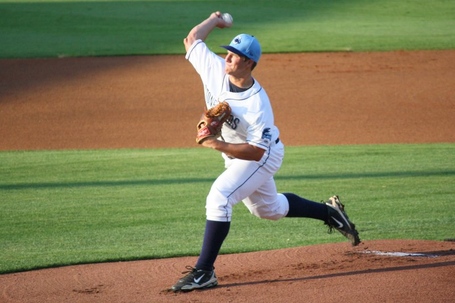 Despite only being a 29th round pick from a junior college, Wood had one of the more impressive pro debuts for a Rays 2013 pick. Aside from having a fastball in the high-80's to low-90's, not much is known about him. In his second to last start of the season, he struck out 12 in just five innings pitched. He was a few innings short of qualifying for league leaderboards, but among pitchers with more than 40 innings, his strikeout rate was second best in the Appalachian League.