The value of a run

"Pitching is 75 percent of baseball- or 70 percent, or 90, or any other high number that pops into the head of the speaker." -Leonard Koppett

Share All sharing options for: The value of a run

On June 29, 2013, James Loney singled to right against the Tigers, scoring Matt Joyce from third base, the Rays' 373rd run of the season.

This was the most valuable run the Rays scored all season.

How can anyone make this claim? How can any one run be worth more than another? How is the 373rd run scored different than the 646th run scored?

First of all, all runs are not created equally. The value of a run scored is dependent on the run scoring environment. When fewer runs are being scored, each run contributes more to a team's chances of winning than when more runs are being scored. This seems pretty intuitive but can be proven easily. A team that averages three runs per game and allows two per game will be projected to win 112 games using the most basic version of Pythagorean Expectation. Meanwhile, a team that averages five runs per game and allows four per game would be projected to win about 99 games. A +162 run differential is incredible regardless but much more so when the run scoring environment is low.

The reason runs become more valuable when scoring is lower is because excess runs not needed to win are created when teams score more. Thus, we can say that runs have a diminishing return. The more runs exist, the less each individual run means. This logic seems reasonable but how can it be proven?

A reasonable starting point is Bill James's Pythagorean Expectation. This equation tells us how runs scored and runs allowed affect winning percentage by:

We're interested in the diminishing value of runs so let's hold runs against constant at 646, the number of runs the Rays allowed during 2013. Then let's add in each of the 700 runs scored by the Rays during the season and see how it affects winning percentage: 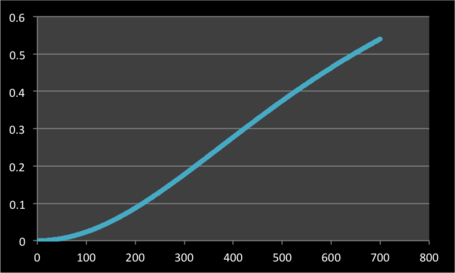 Not surprisingly, as a team scores more runs, the higher that team's projected winning percentage is. In order to understand the value of each of these runs however, we need to know the value of each run scored. Just looking at the above curve, it appears slightly bowed. That is, it isn't a straight line. It appears to be increasing faster near zero and slower near 700. Fortunately, it's possibly to generate a curve that illustrates this more clearly (some calculus ahead). 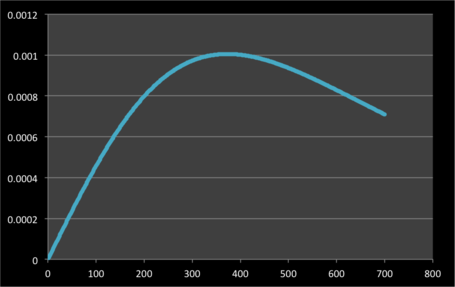 The above curve is a graph of the first derivative of the original equation. Essentially, the numbers on the right (y-axis) show how much each run contributed to the Rays' final projected winning percentage as the runs are scored along the x-axis. There is a clear maximum which can be found using a first derivative test. The maximum, it turns out, is 372.97 or 373. The easiest way to think about what this graph says is to draw lines up from a chosen point on the x-axis to the curve and consider that line drawn the value of the run chosen. This process is akin to integration, which itself (when evaluated from zero to 700) produces a .54 result which matches the roughly 87 projected wins from the original equation (an expected result).

Using this method, the most valuable run scored this season was Matt Joyce's against the Tigers on June 29.

More generally, what does all this mean? Is offense overrated?

It's worth noting that the curve peaks instead of constantly decreasing. This means that runs increase in value as more are scored until a point. The point is dependent on the amount of runs scored and allowed. This makes intuitive sense, as without runs it is literally impossible to win. bWAR is awarded from a pool that is dependent on how much teams value position players and pitchers via salaries. In 2013, 594.8 WAR went to position players while 409.9 went to pitchers, reflecting how teams value pitching and hitting. Salaries are an imperfect measure of how teams value players as each team has unique constraints. Nonetheless, this analysis indicates that preventing runs should be a higher priority. Whether this is true or not is an easily answered question. Unfortunately, the same analysis is not possible in reverse because there is no starting point to subtract from (instead of adding runs to zero).

According to Baseball Between the Numbers' "Can a Team Have Too Much Pitching" by Steven Goldman, teams are slightly more likely to finish higher in the standings when leading the league in runs allowed as opposed to runs scored. Do the Rays value pitching or hitting more? In 2013, the Rays spent roughly $63 million on player salaries, about $26 million of which was dedicated to pitchers. Therefore, the Rays spent about 41% of their payroll on pitchers, close to the Major League as a whole. We know that the Rays don't value players so simply and are looking for bargains and excess value. It's important to keep in mind that pitching is not the only factor in run prevention. The Rays annually put out one of the best fielding teams in the Majors. The money paid to position players is not simply for run creation but also for defense and subsequently run prevention.

The Rays have achieved uncommon consistency over the better part of the last decade through excellent evaluation of value and run prevention through pitching and elite defense. It's hard to argue with the results on the field with one of baseball's smallest payrolls.