Searching for a First Baseman

Prepping for the Winter Meetings.

Share All sharing options for: Searching for a First Baseman

The Rays enter the Winter Meetings in search of someone to man first base next season. As the dust settles on the first round of signees, here's a look at who is available on the market, with Steamer projections for 2013 from Fangraphs.

Loney currently has an asking price of three years and $27M for an AAV of $9M. For an elite defender and gold glove candidate, that's not too drastic. Still, that's somewhat beyond the Rays' risk averse ways. Last year, Loney displayed a career best 2.7 fWAR on his one-year, $2M contract, posting his best batting line since 2007.

The best comparison for what the Rays might spend at first base is Carlos Pena, who earned $6M, $8M, $10.1M, became a free agent, and the returned for $7.25M with the Rays, but that's not a fair comparison. Pena approached the league-leaders in home runs. Loney is, uh, the opposite kind of player, but with equal (or better) defense.

The Rays caught lightning in a bottle with Loney last year, but like Casey Kotchman it's sure to fade. The Rays are the ideal team for Loney, where he can slap singles and lean on his defense for job security at a power position, but at that cost with a three year contract, the Rays will pass.

Loney's agents set out looking for three years and $40M, have come down to $27, and will need to come down further if he's gonna play under the dome again. I'd be happy with a $6M AAV, but at that price the Pirates could surely out-bid. According to Friedman, discussions are ongoing, but can the Rays find someone better?

Offensively, at least, the answer is ostensibly yes.

For all intents and purposes, you can assume Hart returns to Milwaukee, where he is expected to play next season so long as his right knee has recovered from surgery. Hart was cleared to resume baseball activities last week, and has encouraged major league teams to observe his workouts in Arizona, if they're interested.

The Brewers are already committed to making an offer on Hart, based upon the status of his health. Thus far, projections peg Hart for a .345 wOBA and 118 wRC+ next season, significantly under his past few seasons of 130 wRC+ ball.

Hart has the third highest ISO of free agents this season dating back to 2010, behind Napoli and Granderson. All three players, however, play in friendly parks.

Most rumors moving forward should be based upon his knee, with his agent providing some rumors at the winter meetings, but his health could drive the market.

A left handed slugger with a strong need to be platooned, Lind would be more of the same for the Rays line up, and would need to be acquired from a division rival, which is no simple task.

Lind is an adequate defender, and can be expected to thump over twenty longballs. He's on the radar of the Pirates, according to Jon Morosi, and would slot well into Pittsburgh's line up as the complement to Gaby Sanchez. The Rays, meanwhile, could use Sean Rodriguez in his stead.

The Mets have long fielded both Ike Davis and Lucas Duda, first basemen by trade, by slotting one into the outfield with poor defensive results. This season, New York seems willing to finally part with one, and the likely candidate is the one-year-older Ike Davis.

Labeled as a slacker and hopefully an inexpensive commodity, Davis has never had everything come together in the same season since his rookie campaign. Last year, the problem was a near 27% strikeout rate, albeit one that coupled with a 15.1% walk rate.

The Brewers are known to have inquired on Davis, but talks never gained traction. The Mets will need to come down in price to trade him. Isaac Benjamin Davis is entering his first year of arbitration, and has three years of control remaining.

Joel Sherman recently connected four teams with Michael Morse, and none of those were the Rays. In fact, there were teams that did not need first basemen mentioned: Rangers, Rockies, Giants (who have been connected twice), and Marlins.

Morse is recovering from left wrist surgery in October due to a bone outgrowth that reportedly hampered him the last three seasons -- during which he still averaged 21 home runs and an .861 OPS.

You can trace the injury back to 2011, his age 28 season where Morse put up a .390 wOBA season with 31 home runs and a 148 wRC+, and see the sharp decline. I happen to have faith that this surgery will bring Morse back to a higher level, possibly much better than the 114 wRC+ currently assigned by Steamer, but would want a contingency plan for first base if he were brought in.

The teams listed make me wonder if Morse is more interested in playing the out field next season. Morse is an adequate fielder at first base, but in the outfield, Moose is a nightmare (<--- understatement).

I actually might like the signing for the Rays if Morse's wrist has truly improved. Looking over his performance at first base for 83 games in 2011, Morse had 23 scoops and started six double plays, which isn't far off from James Loney's pace last season. Arbitrary measures, but worth mentioning.

Like Hart and Morrinson, the hope is that the injury could keep his price from inflating, but the power potential to be had with Moose will likely make him expensive. 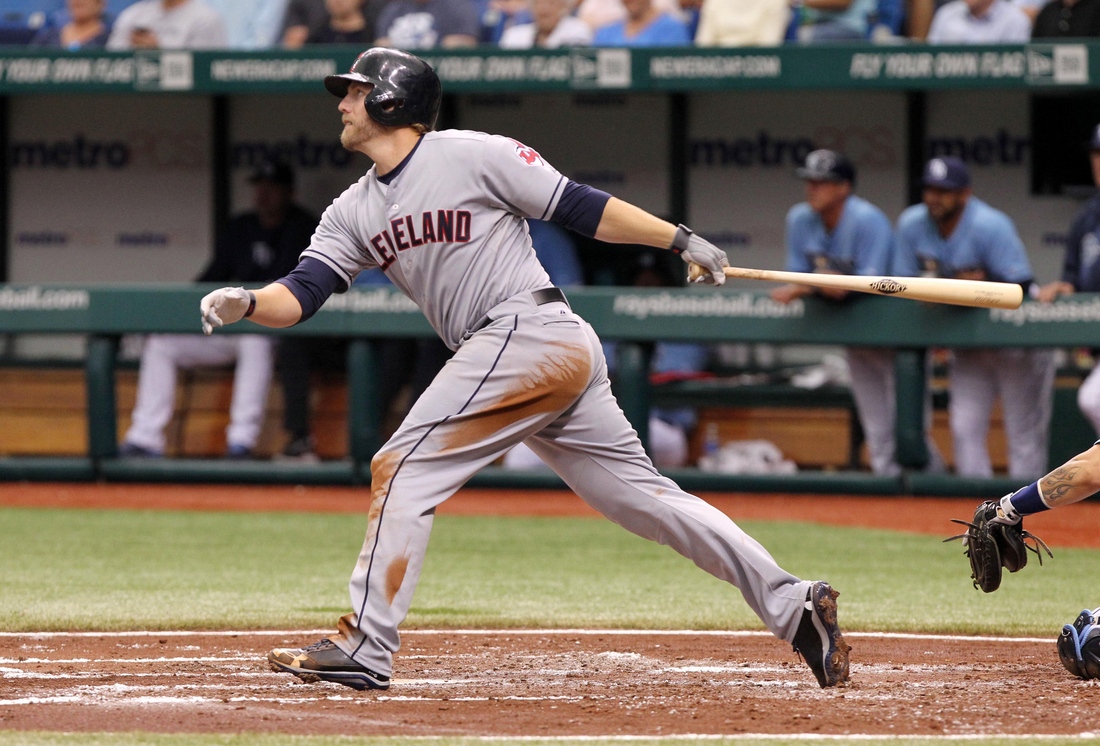 This is your dark horse for 2013. Despite posting the worst offensive season of his career, Reynolds and his 30% strikeout rate is worth consideration. 2009 is the only season in which he's posted higher that 1.7 WAR, but Ian is a nut case for him.

Only 29, his down season saw a few less walks and a drastic power outage that should rebound next season. Reynolds is a bad defensive third baseman, so he's probably an alright first baseman. The cost is low, and the dividends could pay off big time.

With the Rays interest confirmed by MLB.com's Joe Frisaro, it's easy for LoMo to become a top interest. He's an oft injured first baseman with a great pedigree and a penchant to piss off his front office. More on that from from Marlins writer Michael Jong

You have to sort of question Miami's motives with this move. Morrison is the younger of the two players and has the better upside, so why would Miami opt to sign someone more likely to do worse than Morrison to replace him at first base? Morrison has previously gotten into spats with the franchise, most notably in 2011, when the franchise demoted him shortly after he missed a non-mandatory team photo op earlier in the day. The team has also attempted to silence LoMo's significantly boisterous and entertaining Twitter account, which has previously gotten him into media trouble.

Jon Morosi has also been on the Morrison rumors this off-season, indicating that roughly 10 teams have expressed interest. This includes the Brewers, who are the Rays' biggest competition for Corey Hart should James Loney sign elsewhere.

The biggest roadblock for the Rays should be that Morrison, like Hart, is recovering from right knee surgery; however, Morrison is not expected to begin running or baseball activities until March, while Hart has already been cleared by doctors. A trade built around Sean Rodriguez seems to have legs at the moment.

Morrison has batted doubles at a rate of 5.6% in his career, better than league average for first baseman by 0.7%. He is entering his first year of arbitration, with three years of control remaining. More on Morrison here.

A surprisingly excellent defender, according to advanced metrics, I've long been enticed with acquiring Trumbo, but he would be expensive. His first year of arbitration should garner shy of $5M this off-season, and while he's being shopped by the Angels, the asking price is young starting pitching. The Rays are loathe to let that go.

There are likely too many suitors for this acquisition to make sense. I previously looked into Operation Trumbo Drop in the Gauging Interest in David Price series (link). Trumbo is a consistent hitter who is constantly improving, but far too rich for us to acquire.

Alden Gonzalez believes Trumbo's status could be made more clear one Matt Garza chooses where to sign. Should Garza go home to southern California, the Angels will be under less pressure to acquire front line pitching.

A top prospect who never panned out, the pending presence of both Kendrys Morales and Jesus Montero projects to make Smoak expendable for a team that would rather field offensively-minded players.

Smoak has been a piece under consideration in a prospective trade between Seattle and Tampa Bay for David Price, but that wouldn't preclude the Rays from acquiring him in a lesser deal.

Like Morrison, Davis, and Trumbo, Smoak is entering his first season of arbitration, with three years of control remaining.

There's plenty of other first basemen on the market available via signing or trade that only need short blurbs as well:

Daric Barton -- trade candidate -- defense first, OBP guy on the Athletics bench -- I believe some adjustments to his swing could pay dividends, fits the mold of a Rays player well -- two years of control remaining, out of options -- Steamer: .338 wOBA, 113 wRC+ -- want

Kevin Youkilis -- free agent -- not sure how many discs he has left in his back, but his projected .330 wOBA and 108 wRC+ is not bad for a scrap heap find -- his glove should still play well at first -- if healthy -- want

Delmon Young working out at 1B with the goal of increasing his versatility for interested clubs. He is 100 percent healthy and weighs 219.