Since joining the Rays, Kyle Farnsworth has adjusted his pitch usage to get more ground balls.

There was a time when Kyle Farnsworth's name was synonymous with a flame throwing reliever who lacked command and composure. But as Rays' fans have seen during the past two years, Farnsworth has matured from his younger days and developed into a good back end of the bullpen pitcher.

Since coming to the Rays, Farnsworth has seen his ground ball rates reach new heights, getting ground balls on 50.6% and 55.1% of balls in play during the past two years. With the Rays defense playing behind him, such strategy should prove effective going forward, as it has already.

The underlying factor in these changes in batted ball data is the use of his arsenal. This is displayed in the following chart:

As we can see, Farnsworth made his initial adjustment in 2009, during his time with the Royals. The adjustment led to a high increase in ground balls and thus success. Another aspect of the chart to look into is his dip in the usage of his four seam fastball. While he used to rely heavily on his fastball, which averages 96.36 mph, he has steadily dipped his usage of it with the Rays. Ever since the beginning of 2010, Farnsworth has also thrown a higher percentage of sinkers than four-seam fastballs. His sinker is thrown a little slower than his fastball (94.09 mph on average during the time frame), but it has far more movement and.... generates more ground balls.

During the past six years, Farnsworth generated ground balls on around 60.09% of sinkers put into play. For his four-seam fastball, the rate is 28.84%. So by throwing less four-seam fastballs and more sinkers, Farnsworth is generating more ground balls. While such an adjustment, in theory, should lead to a much lower strikeout rate, that has not been the case. By upping his slider usage (35.6 whiff/swing rate), Farnsworth has still managed to strike out a healthy amount of batters.

By throwing his sinker more often and his four-seam fastball less often, the effectiveness of the traditional fastball has increased. The following chart illustrates the point: 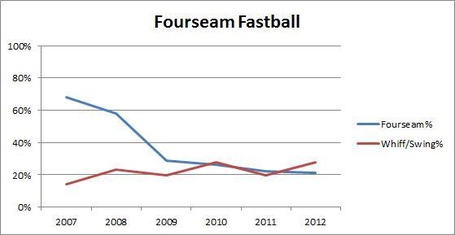 So by decreasing the amount of times he uses his fastball, Farnsworth has actually made it more effective. Farnsworth's transition from a flame throwing, wild fly ball pitcher to a one that produces ground balls by mixing up his pitches is the reason for Farnsworth's development from a mediocre pen arm to one of the better relievers in the American League.

A thought to leave the reader with.....In 2012, the velocity of his sinker decreased drastically, dropping to an average of 92.85 mph. However, the pitch generated ground balls 70.97% of the time (career high) while holding opponents to a .219 TAv (a career low for the pitch). It will be interesting to see if the change in the velocity and results of the sinker is a real change that he maintains going forward.

Pitch information came from brooksbaseball.net while the overall statistics came from fangraphs.com.