Notes on the pitching staff from day two of spring training.

Share All sharing options for: The Rays Tank: Sandwich Edition

On Tuesday, Steve provided a handy recap of the first day of spring training, where pitchers and catchers reported for their first day in Port Charlotte. Yesterday, the reporting day for position players to begin spring workouts, there was no such recap. But fear not, the Rays Tank is here to fill the void.

Notes filed in with news from the bullpen first. Fernando Rodney spoke with reporters in the morning and claimed he did not have an extensions in the works with the Rays, something Dominican reporters misunderstood - twice. He also reminded the journalists that he was not against an extension in Tampa Bay. Rodney still plans to pitch for his country in the World Baseball Classic.

Meanwhile, Joel Peralta was in camp but not pitching yesterday. He strained his neck getting out of his camaro en route to pick up sandwiches, surely giving the restaurant he visited - Port Charlotte's "Cuban Taste" - the most publicity it has ever received.

The odd injury prompted Yahoo! Sports to post this picture: 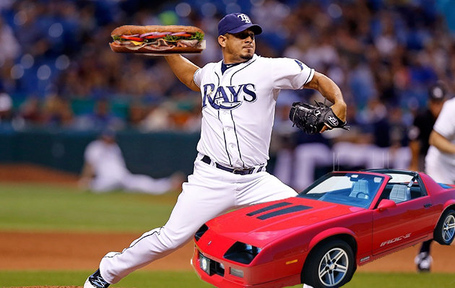 On his choice of car, the article had a suggestion:

Those things are low and Peralta is 36. Maybe it's time to admit something here, Joel: Camaros are a young man's car. Go get a Tahoe.

The injury is not considered serious.

News from the starting rotation was less substantive. David Price is recovering from allergies so he isn't pitching yet (woah are we desperate for baseball news), but he brought his dog Astro to Charlotte Sports Park to keep reporters entertained. Roger Mooney was able to catch up with Price on channeling his success from 2012 after team workouts, or in other words, how he won't?

Scheduled to throw off the mound this afternoon are Jeremy Hellickson, Matt Moore, and Alex Cobb, as well as set up reliever Jake McGee.

The Times had a few observations of pitching from Merlot Joe:

Maddon was pleased overall with the pitchers' conditioning and form. Among those he singled out were Price, RHP Fernando Rodney, LHP Mike Montgomery (acquired from the Royals), LHP prospect Enny Romero and Hernandez.

"Up and down the line, there's so many good arms," Maddon said. "Everybody who threw today, they all did something pretty good and they all looked to be in great shape."

Position players began to trickle in yesterday, but are not due in camp until Sunday.

Finally arrived to my new home in Port Charlotte for next 6 weeks. @raysbaseball workout starts bright and early tomorrow!

- Longoria talked with the Times about his new approach to spring training this year, showing up early and reading the roster.

- Finally, for the bRAYves fans: The Upton brothers, together at last.