The Rays Tank: Stu Sternberg gives a shout-out to a DRB member and Jake Odorizzi competes for a rotation spot

Apparently we all need to step up our introduction game. Rays owner Stu Sternberg was milling about the field during Saturday's FanFest and only one of the commenters on this site was apparently brave enough to introduce himself as such, as he explained in an e-mail...

Can you please pass along that it was enjoyable to meet Sternfan at fanfest. I was on the field all morning and afternoon speaking to fans. It was disappointing that he was the only DRAYS Bay contributor to say hello.

Shots fired from the boss man. At the very least it shows that he actively reads a site(s) dedicated to the team, which is likely more than you can say for most owners in baseball.

In other Rays news, Jake Odorizzi got some positive press from two different publications yesterday. Over at MLB.com Bill Chastain has some quotes from the young right-hander, talking about his opportunity to make the team this season. He's coming over from a situation in Kansas City where he was almost assured a rotation spot to the Rays, where he's going to begin the season in Triple-A barring any unforeseen circumstances. That can be difficult but it sounds like he has a good grasp of the situation, adding "There's only 10 times a starting rotation has made it 162 games and nobody's gotten hurt. So whenever that time comes, you have to be ready."

Odorizzi came in 14th in Jonah Keri's top 16 prospects most likely to affect the pennant race. Jeff Niemann, and Chris Archer who came in 13th on Keri's list, are the two main roadblocks for Odorizzi. As Keri points out, Niemann is injury prone and getting expensive while Archer needs to learn a suitable third pitch to keep his place in any rotation. Odorizzi's time may come sooner rather than later.

In Luke Scott news, the avid hunter brought in a stuffed boar's head for show and tell with reporters, because of course he did. 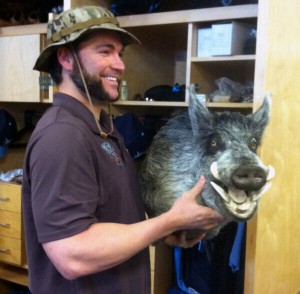 - The Rays will be offering "Ticket Tandems" this season, where fans can purchase tickets at a small premium ($1-7) and are guaranteed a higher quality giveaway through sponsorship my the Tampa Bay Times.

- Russell Martin plans to play shortstop for Team Canada in the World Baseball Classic. No, really, he is.

- There's little more tiresome than articles about teams striking out a lot, but that doesn't stop Jayson Stark from dropping 1,000 words on the Braves tendency to whiff.

- Russell Carlton talks pitcher injuries over at Baseball Prospectus. The "Verducci Effect" is nonsense as Carleton explains, which he's done before. Pitchers get hurt.