Share All sharing options for: The Rays Tank: Baby Longoria Is Here

Longoria missed his second day of camp Thursday, but for good reason. His girlfriend, Jaime Edmondson, gave birth to their daughter Wednesday night.

The birth was a little over a month premature, but labor was in induced instead. I'm not a father, but I know many of our readers are, so I don't know the situation Longoria will be going through, but we all wish him the best of luck.

In non-baby related Rays news, there are going to be stories this spring, like this one from Bill Chastain, about Desmond Jennings' move to center field. They'll question if he can handle it, if he has the arm, etc. He can, and his arm is suitable. It was his main position in the minor leagues so it's not foreign to him. Jennings added "I feel like center field is my natural position. It's what I played throughout the Minor Leagues. It will be a little bit different from last year, but that's what I like. I feel like I get better reads out in center." This is the line I'm confused about:

Remember, Jennings was in the running for an American League Gold Glove Award for left field in 2012. He shrugged his shoulders at the mention of his excellence in left.

He was excellent in left field because he's naturally a center fielder. Of course he's going to excel in left, it's an easier position. Look at Brett Gardner with the Yankees. The piece quotes Matt Moore as saying Jennings is his favorite outfielder and that "all of the pitchers are looking forward to him being out there in center field." The team isn't worried, the coaches aren't worried, no other articles need be written.

We've mentioned Luke Scott's boar antics earlier in the week, but now the boar, donning a Rays cap, has been mounted above his locker. This picture needs to be put on a promotional t-shirt giveaway ASAP 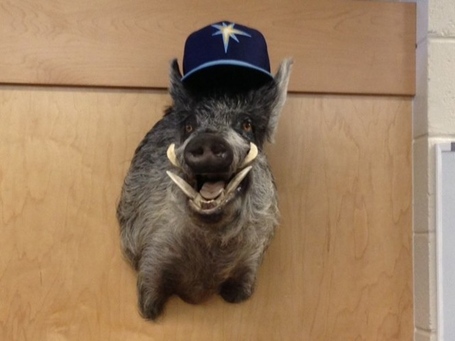 David Price backed off his comments about not wanting to play for the Yankees if that meant having to shave his "beard".

-Read Pat Jordan's fantastic piece on his love of spring training. Jordan is one of the best sports writers ever, so you should be reading anything he writes, anyway.