Jake McGee's success cab be explained by his fastball.

While Fernando Rodney received most of the attention for his historic performance last year, there is an argument that Jake McGee was actually the better pitcher. While Rodney pitched more innings, McGee struck out a higher rate of batters, walked fewer batters, held hitters to a lower on base percentage, and pitched to a lower FIP.

Drafted out of high school in the fifth round of the 2005 draft, McGee signed quickly and pitched 56.2 solid innings for the Devil Rays rookie league affiliate Princeton. While pre-draft reports indicated he was a raw pitcher with a fastball in the 90 range and nothing else, he quickly impressed observers in pro ball with his projectability. Though his fastball was only sitting at 89-91 mph, he threw a sharp curveball and a developing changeup.

During the next several years, McGee ascended both the minor league levels and the prospect rankings. As his frame filled out, his velocity increased a tick or two each year until it was sitting in the mid-90s in the 2007 season. Baseball America, after ranking him the Rays #3 prospect and MLB's #15, had this to say about him:

McGee has a nasty fastball that managers rated as the best in the high Class A Florida State League. His heater sits at 93-95 mph and touches 98 with impressive movement. His slider has good tilt and he has improved the depth and fade on his changeup.

Unfortunately, McGee suffered an elbow injury the following season, requiring Tommy John surgery. After pitching late in the 2009 season, McGee began his trek back in AA and AAA in 2010. There he showed his dominant fastball and a feel for his curveball and changeup. The Rays moved him to the bullpen late in the year, which allowed him to make his major league debut with the Rays.

In his fist appearance with the Rays, he struggled to throw much harder than 90 mph en route to a poor performance that cost the Rays a game. However, in his next game, the pressure and nervousness of his major league debut had worn off, and he gave Rays fans reasons to anoint him the closer of the future. He threw 10 fastballs, ranging from 93-97 mph. Two of the batters, unable to keep up with the pitch, went down on strikes.

Expectations were high for McGee in 2011, but, for the most part, he failed to deliver. Early in the season, he showed diminished velocity; instead of averaging around 95 mph, his fastball sat at 93 mph. The results were disastrous. His ERA in the first half of the season was 5.14. Demoted to the minors, the Rays bluntly told McGee exactly what he needed to do: throw harder. It took some time in the minor leagues, but McGee finally found his velocity and once again was promoted to the big league club. There he flashed some of the heat that excited Rays fans a year prior.

The story of McGee's 2012 season has been narrated many times before. To recap, McGee started the year off poorly. After allowing three runs in a game in Detroit, everything suddenly clicked. From that point on, he pitched 54.0 innings with a 1.67 ERA with a 72/9 K/BB ratio.

The absolute key to McGee's success is his fastball. When his fastball is working, he is close to unhittable. When it is not, he struggles.

His fastball is truly a special pitch. In 2012, McGee's fastball averaged 96.45 mph. That makes it the second hardest fastball thrown by a left handed reliever (faster than any starter for that matter). And despite the fact that he threw it 88% of the time and lacks a good offspeed pitch, he still managed to find tremendous success with it. Batters knew that the fastball was coming, yet they could not manage to hit it.

Here is a brief look at how it compares with the fastest fastballs by left handed relievers.

Data is from brooksbaseball.net.

From a strictly results oriented perspective, McGee's fastball is either the first or second best, rivaling Chapman's. While Chapman gets a significantly higher percentage of whiffs per swing, McGee edges him out in TAv. For McGee, the Whiff/Swing figure may be a little deceptive. Since McGee lacks a true plus offspeed pitch (or even one that he throws with any frequency), batters were probably able to sit on the pitch and thus not whiff as often. But even though they were looking for fastballs, they still could not manage to square up McGee's pitch or even put it in play at a high rate. For example, McGee allowed the ball to go in play only 14.6% of the time in 2012 when throwing his fastball. For Chapman, that figure is 11.5%. So while Chapman has the edge, the difference is much smaller than their whiff/swing rates suggest.

Why is McGee's fastball more effective than the others (excluding Chapman)? The answer is the pitches' movement. While velocity is very important, the movement on fastballs can separate their quality. 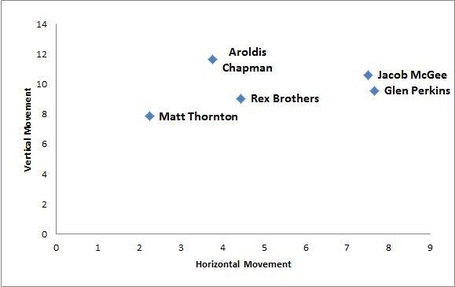 As the chart shows, McGee combines elite velocity with tons of movement. The result is a devastating pitch.

Going forward, McGee still has some areas to work on. As with any young pitcher, he still needs to work on his command. Developing his changeup/cutter is also a priority. But so long as he can continue to throw his fastball like he threw it in 2012, McGee should have no issue finding success.