Can the Yankees overcome a loss of power and injuries to contend in the AL East in 2013?

In a normal world the following quote would immediately be attributed to Andrew Friedman, Matt Silverman, or Stu Sternberg:

"I’m a finance geek, I guess I always have been. That’s my background. Budgets matter, and balance sheets matter. I just feel that if you do well on the player-development side and you have a good farm system, you don’t need a $220 million payroll. You don’t. You can field every bit as good a team with young talent."

but it's not from any of the Rays trio it is from the bizarro front office of New York Yankees and was issued by Hal Steinbreenner in an interview with the media in March of 2012. In the same article Steinbrenner discussed how the Yankees would operate moving forward to get beneath the $189M luxury tax threshold by 2014.

"Is it a requirement with baseball that we be at 189? No, it’s not a requirement. But that is going to be the luxury tax threshold, and that’s where I want to be."

There are two benefits to getting the payroll to $189M or below by 2014. The first is easy to understand and that is to reset the luxury tax rate from 50% to 17.5%. The second is a bit harder to digest but essentially it gives the Yankees a rebate on money distributed to the 15 smaller market clubs in what is known as the market disqualification revenue sharing program. Joel Sherman of the New York Post discussed this in December of 2011 as justification for why the Yankees would not be pursuing Mark Buehrle or C.J. Wilson. This winter Ken Rosenthal suggested that the actual savings to the Yankees initially thought to be around $50M per year from 2014-2016 may be considerably less.

Initially the comments were taken with a wait and see attitude - after all this is the evil empire, this is a market flush with money, and the team is still run by someone with the name Steinbrenner. But Steinbrenner was true to his word and he stuck to the plan as noted by Mike Axisa at River Avenue Blues. Even after an uneventful off-season some in the Yankees front office (as relayed to Rosenthal in article above) suggested that the lack of movement in free agency was not due to the luxury tax implications but not being enamored with the quality of talent on the market.

The story line for the New York Yankees through much of the winter was their lack of activity in the free agent market, the return of both Derek Jeter (from a broken ankle) and Mariano Rivera (torn ACL), Alex Rodriguez hip surgery and how much time he'd miss, and finally the revelation that Alex Rodriguez name had surfaced in a clinic suspected of being a supplier of PEDs (Biogenesis). Then spring training came and the injuries started hitting the Yankees in the same fashion that the Rays were hit with during the regular season of 2012.

In mid-February Phil Hughes was knocked out of action by a bulging disc in his back and although he is poised to return to the Yankee rotation in mid-March he is most likely looking to be on the disabled list for a start or two in April. A more serious injury struck on February 24th when Curtis Granderson was hit by a J.A. Happ fastball and x-rays later revealed a fractured forearm which will shelve Granderson for 10 weeks (mid-late May return).

The last thing the Yankees needed was another injury but that's just what they got when Mark Teixeira injured his wrist while preparing for the WBC. Team USA manager Joe Torre said that Teixeira took about 4 light swings off a tee and complained of pain in the wrist. At first the injury was diagnosed as a strained right wrist but after further examination it turned out to be a partially torn right tendon sheath with a stable tendon which will force him to miss 8-10 weeks(early June return).

The hits keep on coming for the Yankees as just yesterday Brian Cashman announced that Jeter would not appear in any more major league spring training games. He may still play in minor league games but by following this plan the Yankees can back date Jeter's expected stint on the disabled list to begin the year. Whether or not he opens on the disabled list an aging shortstop with questionable mobility having issues with a surgically repaired ankle doesn't bode well for the grind of a 162 game season.

With the free agent departures of Russell Martin, Nick Swisher,Raul Ibanez, Eric Chavez, Andruw Jones and the losses of Granderson, Rodriguez, and Teixeira paired with a quiet off-season on the free agent front leaves manager Joe Girardi with some big holes to fill in his lineup specifically when it comes to power. In 2012 the Yankees set a club record with 245 homers and had 10 players in double figures but 6 of those players (Martin, Ibanez, Swisher, Chavez, Jones, Rodriguez) combined for 112 homes and due to injury Granderson and Teixeira combined total of 65 will most likely be trimmed.

Trying to maintain or improve the offense while staying with the framework of the planned 2014 $189M payroll proved to be a difficult task mostly involving signing aging veterans to 1 year contracts. The Yankees re-signed Ichiro Suzuki who after muddling through the 2012 season with the Seattle Mariners (.261/.288/.353) suddenly had a resurgence with the Yankees (.322/.340/.454). The Yankees rewarded him with a 2-year $13M contract. To fill the hole at 3b created by Alex Rodriguez's hip injury they signed oft-injured long time Red Sox Kevin Youkilis to a 1-year/$12M and to replace Raul Ibanez they signed oft-injured Cleveland Indians DH Travis Hafner to an incentive laden 1-year/$2M contract.

The remainder of the off-season was spent adding less than stellar role players such as Juan Rivera, Dan Johnson, Matt Diaz, Bobby Wilson, and the recently released Brennan Boesch. The Yankees did reach out to Chipper Jones and Derrek Lee to gauge their interest and both men declined to comeback. 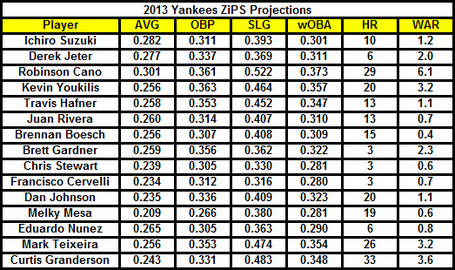 The Yankees did not retain Freddy Garcia but did re-sign Hiroki Kuroda and Andy Pettite to go with C.C. Sabathia,Ivan Nova, Phil Hughes or David Phelps. Sticking to the 1-year theme Kuroda was given $15M and Pettite was given $12M for the 2013 season.

The Yankees have an aging rotation spearheaded by Kuroda (38), Pettite (40) and Sabathia (32). While Kuroda was healthy for the duration of the 2012 season and made 33 starts, Andy Pettite missed time after breaking his ankle only was able to make 12 starts, and Sabathia missed time with a groin pull and elbow irritation made only 27. Additionally, Sabathia underwent surgery in the off-season to remove a bone spur from his left elbow.

As noted above Phil Hughes is recovering from a bulging disc in his back and if he is unable to make the opening day roster his spot in the rotation is most likely going to go to David Phelps who made 11 starts for the Yankees in 2012. The ZiPS projections for the Yankees likely rotation candidates is provided below:

Rafael Soriano declined his 2013 option with the Yankees and has since taken his talents to the Washington Nationals and the Yankees hope that a 43 year old Mariano Rivera coming off surgery to repair a torn ACL will resume his dominance in the 9th inning and allow manager Joe Girardi to build the bullpen from the 9th inning backwards.

Rivera will be joined by 2012 holdovers David Robertson, Boone Logan, Joba Chamberlain, David Phelps (if not in rotation), and Clay Rapada. David Aardsma (who has missed time this spring due to a groin strain) will complete his comeback from TJ surgery which cost him the 2012 season.

In 2012 the Rays won 10 of 18 head to head matchups against the Yankees and the two teams will meet 19 times in 2013. While the Yankees are on the mend they will make their first two visits to Tropicana Field - April 22 though April 24 and May 24 through May 26. The Rays will make one stop in New York prior to the All-Star break on June 20 though June 23.

Shortly after the All-Star break the Rays will return to the big apple for a 3 games series July 26 through July 28. The teams will only meet once in August in St.Petersburg on August 23 through August 25 and the Rays will visit New York for 3 games on September 24 through September 26.

The Yankees have done little to replace the components of what they lost on offense. Until Granderson and Teixeir return to the lineup the Yankees are going to have to depend on manufacturing runs something that they haven't had to do with a power laden lineup in years past.

Based on the past several seasons Travis Hafner and Kevin Youkilis will both most likely land on the disabled list for a various injury at some point in time. It should stand to reason that the Yankees are going to have difficulty scoring runs for the first two months of the season which will put additional stress on an aging pitching staff.

The health of Phil Hughes will be monitored closely as disc problems in the upper region of the back can linger and greatly impact performance. Andy Pettitte and Hiroki Kuroda will look to repeat the success they had in 2012 but as players age repeating performance becomes more and more difficult.

The Yankees path to success will be the same as many teams which is get an early lead and protect it with a stingy bullpen but unlike years past the Yankees will have trouble scoring runs to grab leads for the bullpen to protect. Despite the age and injury concerns the Yankees are still a formidable team led by a manager in Joe Girardi who doesn't allow excuses to derail performance.

Despite the black cloud caused by the lack of spending and injuries Baseball Prospectus projects the Yankees as winning the AL East with a record of 92-70 and the odds makers in Las Vegas sets the Yankee over/under win total at 86.5.