A comprehensive look at the use of the shift, the importance of Longoria, and the missing aspect to his swing.

Share All sharing options for: Season Preview 2013: Evan Longoria and the Defensive Shift

The defensive shift -- moving three infielders to one side of the diamond -- is not an uncommon sight for Rays fans, especially when playing teams like the pull-happy lefty-heavy Yankees. It drives players like Adam Dunn and Mark Teixeira crazy, and boosts team defense by putting players where the ball is most likely to go. Yet the shift went unheralded for many years.

The Rays quietly lit a fire in 2012. Sports Illustrated reported last May that Maddon used the shift 50% more than any other team in 2011, drawing national attention on that same day the New York Times revealed -- quite bitterly -- that the Rays had employed the shift over 150 times during the first month of the 2012 season.

The Times attributed the shift to Tampa Bay's general success on defense, and their ability to sweep "the big boys" so evenhandedly in the opening series of the 2012 season. They weren't wrong.

Columns on the shift cropped up everywhere and often sourced research by Baseball Info Solution, which tracked defensive shifts and proved the Rays use it three times more than any other team in baseball. The Blue Jays caught up as the season passed, but what use to be called the "Ted Williams Shift" for its novelty has become somewhat commonplace in Major League Baseball.

The critically important aspect to this defensive alignment is the third base position, as the majority of shifts are to the right of the diamond. Without a player with significant defensive range on the left side, the shift is susceptible to failure. If the Rays are going to lead the league in shifts, a skilled defender like Longoria becomes a necessity for the Rays.

As BIS also demonstrated, a resulting trend of the shift is a spike in Defensive Runs Saved (DRS) for the stranded third baseman. In the three seasons prior to the injury, Longoria recorded 19, 20, and 22 DRS seasons -- enough to lead the major leagues during that span and 9 runs better than the closest third baseman. 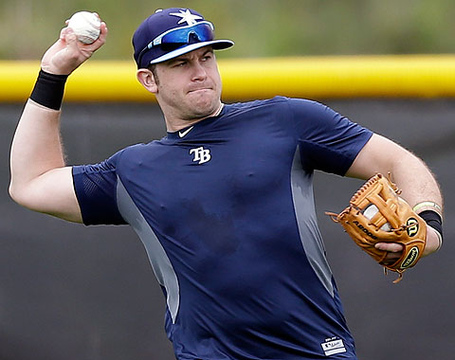 Tampa Bay had a down year defensively in 2012, which for the Rays means not leading the league in metrics like UZR, and that can easily be attributed to a lack of consistency at shortstop and Evan Longoria's injured hamstring, which sidelined the star third baseman for three months.

Last season, Longoria only notched 1 DRS. Making matters worse, his counterpart at short stop netted -4 DRS through a combination of Sean Rodriguez, the recently traded Elliot Johnson, and the dabbling of Ben Zobrist.

The return of a healthy Longoria should make up for the lapse in defense from last season -- and as an aside, so will the addition of Yunel Escobar, who ranks 4th among shortstops since 2009 in DRS, and saved 14 runs alone in 2012.

In spite of the lacking for defensive prowess, the Rays weren't out of Wild Card contention until game 160, when the Oakland A's claimed the final wild card slot.

Tampa Bay had beaten the Orioles (who held one of the wildcards), and won 11 of 12 in the preceding games; however, the offense had sputtered without Longoria in the lineup. The Rays held the eighth highest wRC+ in 2012 and the best in the American League during the final two months, yet they underachieved while Longoria was on the bench during the middle of the season -- on offense and defense -- and missed the playoffs accordingly.

The shift will be back in action this season. Yesterday, Maddon was testing out a new strategy with Escobar in the right field gap to make use of his arm strength from the shallow outfield position. Even when Zobrist returns to the infield (read: when Wil Myers is promoted), Maddon plans to keep Yunel in the deep portion of the shift, sighting consistency. More confirmation that Longoria will be stranded.

A full season manning the left side of the infield should give a boost to Longoria's sabermetric stats this season, especially Wins Above Replacement.

Last year's woes was a function of time, with little opportunity to accumulate plate appearances or defensive value. Even when Longo was on the field he was still hampered by his hamstring; however, 2011 was different.

One culprit for Longoria's lack in production that year was his BABIP, which plummeted from .336 to .239. The other was an April start that was cut short by nagging minor injuries. Longoria has a habit of starting the season hot, going into a "June swoon", and then picking up where he left off. 2011 was missing that early hot streak; even though Longo never lost the long ball (that is, his power and extra base hits). So perhaps we can call 2011 and anomaly and move forward.

Either way, success in 2012 was expected, and for the time he played Longoria delivered. 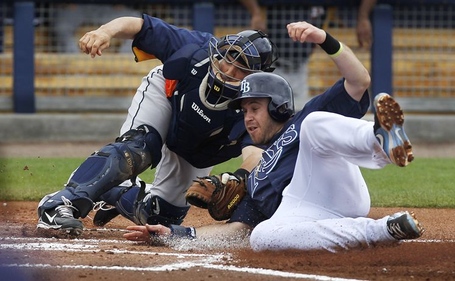 Longoria's injury was a shame. When healthy, Longoria was batting for some of the best offensive metrics of his career, with an impressive first and final month of the 2012 season:

When it was all said and done, Longo accumulated 312 plate appearances, posting career highs in wRC+ at 146, and OPS+ at 149.

Longoria will enter his age-27 season with a new contract extension, which will keep him with the Tampa Bay Rays through 2022 (with an option for his age-37 season in 2023), and of course, a surgically-repaired left hamstring.

That, Longo surmised, was the best decision he's made in his career. He returned to action on Feb. 26th and tested his hamstring twice on the basepaths, including a harrowing slide into home plate, pictured above. No problem. To date, Longoria has played quality defense and been able to run at full speed with no complaints.

If there is room for improvement beyond a healthy leg, it's Longoria's ability to hit toward to opposite field. In a recent interview with Eno Sarris, Joey Votto attributed much of his success to the ability to hit to the opposite field (in fact, 38% of pitches) and with power (.230 ISO). Longoria had relative success at the plate in 2012, and if I had to guess his opposite numbers, it might have said closer to thirty percent. Instead, only 20% of his batted balls found their way right of center in 2012, slightly worse than his career average of 22%. I found this news surprising.

Longoria gained notoriety during the 2008 offseason when a story began circulating about his batting practice routine. Often during workouts, instead of hitting baseballs, Longo will opt for a machine that fires tennis balls. Each is marked with a red or black spot; the red for pull, the black for opposite. The balls can reach 150 mph, and Longoria can easily identify any pitch the machine fires at 100 mph.

Given his attention to detail, I would expect Longoria's spray charts from the last four seasons to show an increased trend in spreading the ball around. Using the pitch f/x database at TexasLeagures.com, this doesn't seem true.

Longoria has had issues hitting out of the infield, particularly the gap between second and third. His tendency to pull is not enough to justify a reverse-shift (putting three men on the left side of the diamond), but having men on base, particularly on second or third, is enough to distract and mis-align defenses when he comes to the plate.

Truth be told, most players should succeed when men are on base -- so long as they don't ground into double plays or fielder's choices -- but Longoria has a particular history of success. According to research by our Steve Kinsella, Longoria is among the top 50 batters in baseball since 2010 with runners in scoring position, giving him a .113 advantage in OPS with men on base. (.813 OPS with bases empty versus .930 OPS with runners on)

Projections for Longoria vary, yet in an opposite direction than I expected. Here's a sample of my favorites for a few key categories:

The two systems I expected to be more negative than the others were actually quite positive. Both Steamer and Oliver expect Longoria to perform at or near his career average in the categories listed, while ZiPS and PECOTA felt quite the opposite.

Steamer utilizes injury history and scouting reports in its projections, gave Longoria a batting line with the highest marks in each listed category. Oliver, uses a three year weighted average and then adjusts for park factors and regression. After a strong but limited 2012, they also found Longoria trending in a positive direction.

Meanwhile, ZiPS and PECOTA undercut Longora from his average performance. ZiPS uses a four-year weighted average, and PECOTA gets crazy with the cheese whiz, so I'd expect both would think highly of Longo. What I'd neglected was that both systems taper their expectations by using historical statistics of similar ballplayers, which PECOTA identified as Bob Horner, Jim Ray Hart, and David Wright. All three disappointed around their age 27 season, and the former two players didn't exactly have long, illustrious careers.

The David Wright idea is intriguing enough. Is there a fair comparison? Gold Gloves, Silver Sluggers, All Star appearances, entering the league at age-22. An OPS+ that dances around 140. The face of a franchise, locked into a long term contract, home runs. One key difference is that David Wright goes opposite field 30% of the time.

If Longoria would like his career to take a turn toward the Wright path, developing an opposite field swing could push Longo to the next level in 2013.