Last year, I took my first stab at projecting the Rays win total. While it is easy to compare this team to last year's and mentally adjust the win totals based on player additions, subtractions, and performance, a more accurate method of measuring a team's projected win total is through individually projecting each player's contributions and adding them up.

Thanks to an easy to use and incredibly helpful WAR spreadsheet by Sky Kalkman, we can attempt to project the team's win total by inserting a few WAR components. Just as I did last year, I made my own projections for each player. These were not calculated by any formula, but are based on other projection systems with my personal input accounting for any differences. For example, the Steamer projections have penciled Matt Moore in for a 3.87 FIP next year, a very minor improvement from last year. I think the projection undercuts Moore's talent, so I am projecting him for a lower FIP.

Here is an image of my spreadsheet, with commentary on the individual player's following. 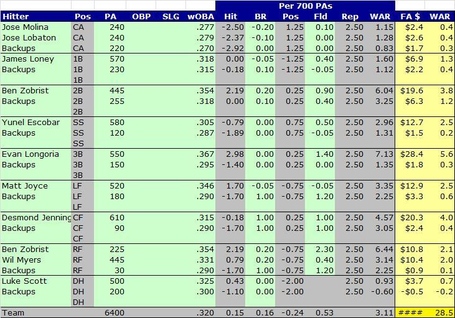 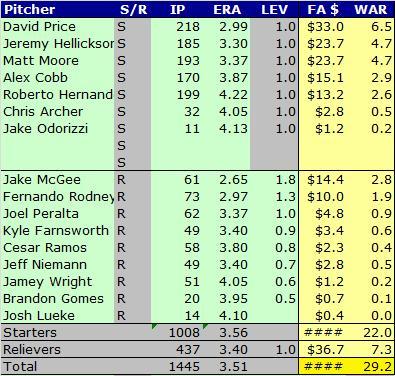 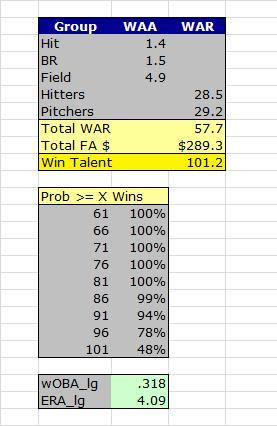 Due to his age, I see Molina's playing time and offensive statistics decreasing from last year. I only give him one run for his fielding, yet I do believe in the incredible value of his framing. The reason that I don't include it with him is that the advantage should be reflected in the pitcher's stats. If I give both him and the pitcher's credit, then the value is incorrectly doubled. Jose Lobaton can handle more than 240 PAs, but I do not envision a scenario in which he is given the opportunity with his lackluster play. The "Backups" in this scenario should comprise of Gimenez, Chirinos, etc.

This winter, I proposed the idea of platooning Loney at first base, suggesting that under a strict platoon the Rays could gain an extra win. However, given Maddon's usage of first basemen in the past, a strict platoon seems unlikely. Since around 70% of PAs come against RHP, Loney would receive 490 PAs in a strict platoon. My projection calls for him to receive an additional 80 PAs, most likely in more favorable situations against LHP. The backups, due to a platoon advantage, should hit around league average. Look for Sean Rodriguez, Ryan Roberts, and maybe even Kelly Johnson to garner time at the position.

Acquired from the Marlins, Yunel Escobar offers the Rays their first everyday shortstop since Jason Bartlett. He probably will not shine offensively, but the solid bat combined with great defense is valuable. Sean Rodriguez is the primary backup, although Ben Zobrist and Tim Beckham could absorb a few plate appearances.

Even if Evan Longoria manages to avoid a major injury, the likelihood of him taking the field almost everyday is very low. Even in a slightly lower capacity, Longoria is still an amazing player. While the backup situation always looks great at the beginning of the year, it rarely works out as well as planned, hence the pessimistic projection for the backups.

After a roaring start to the year, Matt Joyce's bat disappeared for most of the 2012 season. The .346 projected wOBA just about splits the difference between his 2010-2011 seasons and his 2012 season. The 520 plate appearances are an improvement over last year; however, he still will find the bench against most southpaws. The backups, mainly Sam Fuld, are more known for their defense and speed than for the prowess of their bats.

With BJ Upton now a Brave, Desmond Jennings assumes center field. While replacing BJ Upton is no easy task, a solid improvement from the 2012 season by Jennings can ease the pain of the loss. Sam Fuld and Sean Rodriguez are the most likely candidates to back up Jennings; Myers and Zobrist are also options.

As mentioned above, Ben Zobrist will play right field until Wil Myers is called up. While Myer's numbers are not gaudy, it would still go down as a fine rookie year. The 30 PAs are scattered among players to give Myers and Zobrist the occasional rest.

Considering that Luke Scott has never eclipsed 550 plate appearances in his career, it would not make sense to project him to do now. With plenty of rest, hopefully Scott can rebound offensively. When he is not in the lineup, other players can use the position to rest their legs.

David Price will likely take a step back just based on the fact that pitchers rarely replicate Cy Young years. Jeremy Hellickson's ERA is also higher than typical in this projection due to his weak peripherals. Matt Moore is the player that I project to take a major step forward, pitching close to 200 innings with a low ERA. The rotation is rounded out by Alex Cobb and Roberto Hernandez. Due to injuries, I project both Archer and Odorizzi to make spot starts. As can be seen by the WAR totals, even with the loss of James Shields, this should be a fabulous rotation.

The relievers are listed by the leverage situations I expect them to be put in. McGeee, Rodney, and Ramos all regress from their stellar 2012 seasons. I have Joel Peralta pitching closer to his FIP while seeing a decline in his innings due to age.

Overall, the spreadsheet says that if the player's perform to their projections, the Rays should win about 101.2 games. Obviously, such a figure is far too high. While I accounted for players being injury prone (see Scott, Longoria, Niemann), I did not project any major injury. Since injuries almost always happen, it is a safe bet to scratch off about 6-7 wins. That puts the Rays in the 94-95 win range.

The real difference comes in the offensive numbers. In my projection, the Rays hit for a .320 wOBA, .002 above league average. Last year, the Rays only hit for a .311 wOBA. However, it is important to remember just how severely the Rays under-performed last year and how much the loss of Longoria hurt them. If the Rays hit as well as they were projected to and Longoria was not hurt, they should have won over 100 games and cruised to an AL East title. As recently as 2011, the Rays hit for a .319 wOBA.

The defensive runs saved are around where they were in 2011.

For a further reminder of how much the Rays under performed last year, Joe Peta made his 2013 Rays season preview. I highly suggest reading the article, but I will quote this specific part because of how it relates to the topic on hand:

(Glossary: Expected wins, based on a modification of Bill James’ Pythagorean Theorem, are the amount of wins a team should win in any season based on the amount of runs it actually scored and allowed. Deviations will be explained in the appropriate team capsules.

Restated Runs Scored and Runs Allowed are the amount of runs a team should have tallied based on its actual components of batting average, on-base percentage, and slugging achieved/allowed. In the case of the Rays, if they posted exactly the same stats in 2013 as 2012, they should expect to win 97 games.)

Further along in the piece, he reaches the conclusion that the Rays were the unluckiest team in baseball in 2012. His expectations for 2013? He predicts the Rays will finish with a 93-69 record, the best in the AL East.

Expecting the Rays to reach a win total in the mid-90s may seem unrealistic, but there is plenty of evidence to suggest the Rays can do just that in 2012.