The Rays Tank: It's Payday in baseball

Extensions are the new market inefficiency.

Share All sharing options for: The Rays Tank: It's Payday in baseball

There's little Rays news to report as Opening Day looms, so let's talk about the two biggest stories around baseball, and no, I don't mean Scott Proctor being traded to the Orioles.

Justin Verlander and Buster Posey cashed in yesterday, each signing long term extensions. Verlander is now owed $180 million over the next seven years while Posey gets $167 over the next nine. Rays fans should pay attention to Verlander's deal specifically. David Price is a free agent after 2014. He's younger than Verlander and is left handed. He's likely going to get more than $180 million, and odds are that's not going to be from the Rays. Yes, the Rays were able to sign Evan Longoria to a $100 million deal, but $100 million ain't $200 million. Posey's deal has no effect on the contracts of Jose Molina or Jose Lobaton, so, people can rest easy about those two.

With all the talk about how the Royals are much improved, they'll be giving at bats to a 38-year-old Miguel Tejada this season. That doesn't seem wise, even if they're paying him just $1 million.

-FanGraphs' Marc Hulet lists the 2013 sleeper prospects for each team and tags 19-year-old shortstop Brandon Martin for the Rays.

-Manny Ramirez signed with a Taiwanese team, you may recall. This picture is of Johnny Cueto, which makes it my favorite thing of the week. 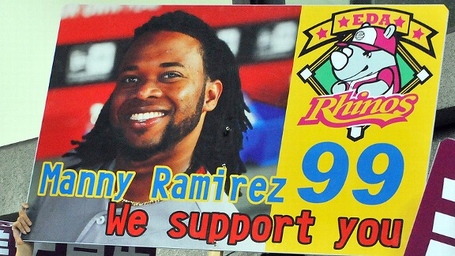 -If you're not reading Sam Miller you're doing yourself a great disservice. His post on the most interesting player you've never heard of was the best thing I read yesterday, and possibly all week.