For the first eight games of the 2013 season, the Tampa Bay Rays haven't looked much like themselves. The pitching has struggled with plenty of blame to spread around. From the Cy Young ace to the tilted-capped closer, the Rays have had trouble keeping base-runners from scoring. The offense, not expected to be world-beating, has been downright anemic, failing to drive in runners or hit for much power at all. After losing three in a row, and the first two in Arlington, the Rays desperately needed a big performance from young lefty Matt Moore if they wanted to salvage a win and get back on the right track.

And on this cold and rainy day, it looked a bit more like the Rays baseball we've come to know and love. A dominant start, a lock down bullpen, just enough offense and Fernando Rodney shooting the moon.

Moore throttled the Rangers powerful lineup, allowing just one hit over five and a third shutout innings. He struggled with his command at times, getting wild and allowing six walks which drove up his pitch count and ended his day earlier than we would hope. However, he limited any self-inflicted damage, allowing no runs and striking out five. Moore has started fast this season, having yet to allow a run, and attempting to buck the reputation as a slow starter.

Moore worked primarily off his fastball, throwing 69 heaters with 37 strikes and 3 whiffs. His curve-ball, that Pitch F/X identified as a slider, was perhaps his best pitch, generating 10 strikes on 18 pitches. While Moore was effective, he was not efficient. The weather, and the strike zone, may have played a role in Moore's wildness but as you can see, he was all over the zone which may have kept the Rangers hitters off-balance but also ran up the pitch-count. 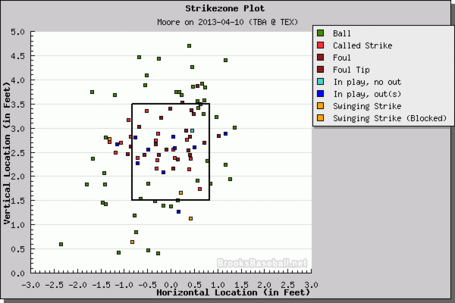 One item of concern for Moore was his tailing velocity later in the game. Moore was losing signficicant pop on his fastball as his pitch count escalated, a trend which I hypothesize is fairly normal, although not always as drastic as this chart implies. 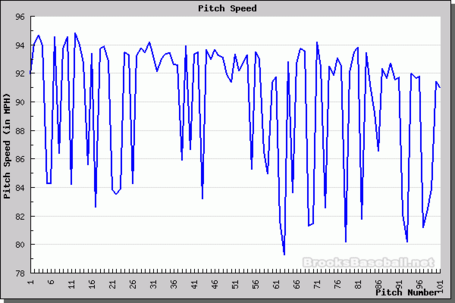 Rangers starter Derek Holland pitched a solid game as well, going much deeper than Moore, eight innings, but allowing five hits and the two decisive runs. Holland pounded the inner half of the plate to the righty-heavy Rays lineup and worked primarily off his sinker which induced 11 groundouts to just 5 flyouts. He struck out four and walked three batters.

The Rays were able to get on the board against Holland in the top of the third inning after Holland walked the bases loaded. The Rays entered the game 0-10 this year with the bases loaded and a slow Ben Zobrist ground ball to thirdbase continued the ineffectiveness. The Rangers were unable to double up the quick-footed Zobrist so a run would score but Shelly Duncan, playing firstbase for the first time this year, struck out to end the threat.

The Rays tacked on a second run in the top of the fifth after Desmond Jennings led off the inning with a double to right center. Sean Rodriguez, hitting out of the 2-hole, grounded out to second but moved Jennings to thirdbase where he scored on an Evan Longoria sacrifice fly. Longoria went hitless but walked and drove in a run with the sacrifice flyball. He avoided playing the field in the cold as Joe Maddon opted to start him in the designated hitter role for the first time this year.

Cesar Ramos got into some trouble in the fifth inning, loading the bases with just one out but survived the scare by forcing Mitch Moreland to ground into an interesting 6-4-3 double play. Yunel Escobar double clutched before making the throw to firstbase and Moreland was safe on the play. However, secondbase umpire Marty Foster, who had an eventful series, ruled that Jeff Baker interfered with Escobar on his slide into second. Baker's slide was definitely questionable and not particularly close to the bag. The arm-bar to Escobar's legs however, was especially egregious and definitely merited the interference call. Foster heard a protest from Rangers manager Ron Washington but it fell on deaf ears and the inning ended without a Ranger run.

Relievers Jake McGee, Joel Peralta, and Fernando Rodney each allowed a baserunner but posted scoreless innings to close out the much-needed Rays victory.

The Rays will get a day off tomorrow as they travel up to Boston to take on the American East leading Red Sox for four games starting Friday.