The Rays Tank: A W and the road trip continues

Getting their first win in this slew of away games, the Rays head off to Boston and Baltimore.

Share All sharing options for: The Rays Tank: A W and the road trip continues

The Rays beat the Rangers 2-0 on the coldest day game in history at Ballpark in Arlington, with a chilly 38 degrees at first pitch.

Matt Moore went 5.3 innings, allowing one hit and striking out five, though he walked six and threw 106 pitches. Moore has yet to allow a run, giving him a 0.00 ERA and a 2-0 record. Fernando Rodney also got his first save of the season, and handed the Rangers their first shutout at home since 2011.

Gareth gave a full recap after the game, highlighting how Moore was effective in his win, but not efficient; resulting in his high pitch count and short start.

The Rays have an off day in Boston today, but the series against the Red Sox looks as follows:

Adam Jones has hit in every single game of the season thus far. He is 16-for-32 in his eight-game streak for the Orioles.

Nolan Ryan will stay with the Rangers as their CEO.

Scott Sizemore tore the ACL in his left knee, again, and will miss the remainder of the season for the Athletics. It was only his second start since 2011, after missing all of 2012 with the same injury.

- Apparently the Durham Bulls don't see Wil Myers leaving any time soon, as they have created "Wilville" in DBAP, complete with a section-themed t-shirt: 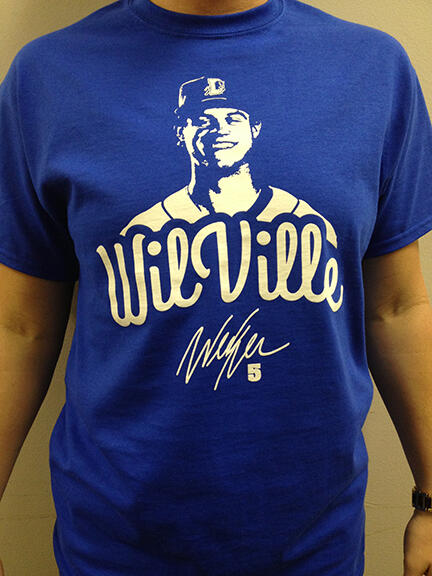 Also at DBAP this year, the addition of "Bull Durham" themed mascots in honor of the film's 25th anniversary, because who doesn't want to see Crash, Nuke and Annie race?

- The Grantland staff has compiled a list of their favorite baseball movies in honor of "42" opening this upcoming weekend, complete with YouTube clips. Missing: "The Sandlot," "Field of Dreams," "A League of their Own."