The game time checks in early at 11:05 this morning in the Patriots' Day feature, Tampa Bay's third in four years. The Rays are finishing their three game series hurting for runs, having scored only once in the last two games, and over six games removed from a homerun.

"Physiologically for the team itself, we got to hit the ball just to really pick everybody’s spirits up," Maddon told Roger Mooney after yesterday's loss. "When you’re not hitting the ball totally you get that bad vibe among the group. It’s really hard to keep them pushing and moving and motivated, but we’ll start hitting the ball. That’s the only thing right now, we’re not making hard contact."

Jeremy Hellickson will face off against Ryan Dempster, who has shown a tendency for walks, strikeouts, and home runs in his first two starts this year. Hey, the Rays are good at two of those things!

Dempster has also had issues with his velocity, judging by Fangraphs, not dissimilar to his start in 2012. Perhaps that will be something this Rays lineup can capitalize on. 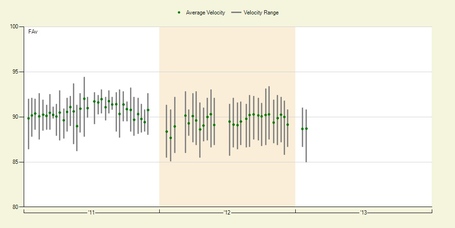