Early in a season that has been at times difficult to watch, seeing the maturation of Matt Moore has been an absolute treat. The left-hander entered Wednesday's game 2-0, having not surrendered a run in 2013, and continued his strong start by stymieing the Baltimore Orioles all evening. The Rays hitters, marred in a season-long offensive slump, broke out and scored six runs to secure the third win in as many tries for Moore.

Moore worked primarily off his power fastball but mixed in a change-up and dynamic curve ball. The curve, which Brooks Baseball identifies as a slider, was a dominant pitch, resulting in 20 strikes and 6 whiffs on the night. Like his last start in Texas, Moore worked the whole strike zone, moving his fastball around and keeping the Orioles batters off-balance. Moore worked deep into the sixth inning, and would have finished in the inning if not for a lucky hop and a missed double play opportunity. He would finish with seven strikeouts, three walks, and five hits allowed while also surrendering his first two earned runs of the season on a two-out home run from Adam Jones in the third inning.

Last week I noted that Moore's velocity was tailing off significantly towards the end of his outing. That does not appear to have been the case this week. Perhaps the unseasonable weather in Texas played a factor or the extra rest helped, but Moore maintained his velocity throughout Wednesday's start. 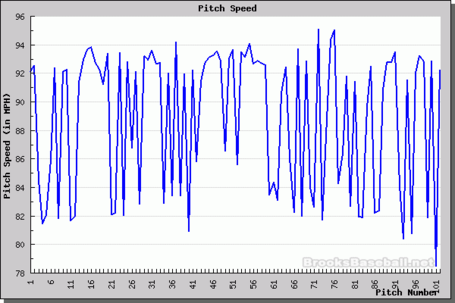 That being said, Moore averaged just 92.78 MPH on his fastball, continuing a slowing trend that seems to have swept the Rays pitching staff. It is still April and pitchers are still working there way up to higher velocities but the drop is something to keep an eye on.

While Moore was spectacular, a more exciting story line may be the reemergence of the missing Rays offense. Building off Tuesday nights late-inning outburst, the Rays slugged two more home runs while scoring six, their second highest total of the season. Seven of the nine starters reached base as the team managed 11 hits, including four hits with runners in scoring position, a welcome reprieve from the futility that has been displayed in recent weeks.

Kelly Johnson, batting second for the second time in as many days, got the party started early, belting the first pitch he saw from Baltimore starter Chris Tillman in the top of the first into the right-field seats. Shelley Duncan would add a home run of his own on a hanging curve ball in the top of the second. After Adam Jones tied the ballgame at two in the third inning, the Rays answered right back in the top of the fourth, scoring two more runs. Evan Longoria led off the inning with an opposite field double and moved to third base when Duncan singled to center field. Jones made an ill-advised throw home to prevent Longoria from scoring which allowed Duncan to move up to second base. The next batter, James Loney, slapped a sinking line drive into center field that Jones tried to catch at his shoestrings but missed, letting the ball roll past him and allowing both Longoria and Duncan to score.

Loney had a great day at the plate, going three for three with two doubles and a walk while driving in three runs. The last two hits of Loney's evening came off Baltimore left-handed reliever T.J. McFarland, who pitched two and a third innings, surrendering two runs. The target of many fans ire, Yunel Escobar, added a two-out RBI in the sixth inning with a soft liner to right field and also struck a ball well in his first at-bat, lining out to center. Regression is fun!

There was some extracurricular excitement in the fifth inning as Joe Maddon was ejected after arguing a close caught-stealing call by second-base umpire Brian Knight. Ben Zobrist struck out swinging on a 3-2 count and Wieters gunned down Kelly Johnson for the double play. The call looked questionable in real time, but replay showed that Johnson was most likely out. Maddon disagreed and decided it was a good time to work off some pent-up anger. Reading Maddon's lips you could see that this one call was not all that was bothering the skipper as he told Knight, "another blown call. Every [expletive] night." Whether Maddon's outburst will fire up his team remains to be seen.

Reliever Jake McGee retired one batter in the seventh and Joel Peralta and closer Fernando Rodney both pitched scoreless innings to close out the ballgame.

The Rays are now 5-9 and in last place in the American League East; the Orioles fell to 7-7. The two teams will wrap up their three-game set Thursday night, as David Price will take the mound against right-hander Miguel Gonzalez.