The Rays Tank: Opening Day, with a dash of extension chatter

Share All sharing options for: The Rays Tank: Opening Day, with a dash of extension chatter

After an extra long Spring Training, baseball returns to Tropicana Field today, with the Rays hosting their eighth straight sold out Opening Day.

We'll get our first look at whether the 2012 Orioles were a fluke, and if David Price can continue his AL East dominance. Either way, it's nice to have the focus back on "real" baseball.

Highlights from yesterday's start of the season:

- Clayton Kershaw became the first pitcher since 1953 to throw a shutout and hit a homerun (his first) in an opener, and Sandy Koufax threw out the first pitch in the Dodgers 4-0 win against the Giants

- Bryce Harper went two for four with two home runs to combine with Stephen Strasburg's seven innings of three hit baseball, and it was enough: the Nationals beat the Marlins 2-0

- The Yankees lost to the Red Sox 8-2 in the Bronx and the fans were anything but faithful, as the outfield was littered with trash and the stands empty after the sixth

- Justin Upton hit a home run in the Upton brothers' Braves debut, with the team beating the Phillies 7-5

- Both Rockies-Brewers and Angels-Reds went into extras, as the Brewers routed the Rockies 5-4 in 10 and the Angels defeated the Reds 3-1 in 13

As Erik touched on the other day, the Rays enter the 2013 season with many recent big deal extensions around major league baseball: Justin Verlander, Buster Posey, Elvis Andrus, etc. Much to fans dismay, all of these almost guarantee that the Rays won't be able to keep David Price.

With the deals thus far, and more to come, multiple opinions have been voiced concerning the current state of free agency in baseball, and the kind of money being offered during extensions.

Here's some of the commentary:

- Grantland focuses on the current emphasis on scouting, drafting and player development, mentioning that the Rays will want big name prospects in return for Price - and that the Yankees and Dodgers both have the money, but lack the prospect depth.

- Ken Rosenthal lists the dollar amounts doled out, and notes Robinson Cano's situation with the Yankees.

- 20 ways to improve baseball right now? Jay Jaffe has the list, and includes the need of a new stadium for the Rays.

- Watching baseball with people who hate baseball: five steps to miserable solitude...or you can just go on Twitter.

- The best, and worst, MLB giveaways of 2013. Because everyone needs this A.J. Burnett t-shirt: 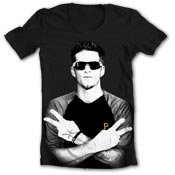