By request, Happy Helloween y'all!

By all accounts, Jeremy Hellickson was pitching with absolute swagger. With confidence in all of his pitches, Hellboy did exactly what he needed to do. 7.0 IP, 3 H, 1 BB, 100 pitches.

Hellickson only hit 20 pitches in the fifth inning. Getting through batters is key for Hellickson's success, and today he was hitting his spots. Rays pitchers allowed only five A's base runners today, four by Hellickson. That's dominance.

The only run scored in the game was a solo shot by Matt Joyce who muscled what might have otherwise been a line drive on a full count. By the eyeball test, Joyce has looked far more comfortable at the plate since the series in Baltimore earlier this week. Over four games in the last two series, Joyce has 5 hits. He credits batting practice, but it was probably Derek Shelton, right?

The most notable batting performance today might have been Ryan Roberts, who Joe Maddon chose to bat second. He delivered with a fly ball to the base of the wall in right field, took a 1-2 count and turned it into a walk, and then was able to hold up a check swing and work a 3-1 count to load the bases for Ben Zobrist late in the game. For the record, Zobrist grounded out to first and the Rays are now 1-14 with the bases loaded.

After the game, Joe Maddon complimented the defense, saying "the guys were in the right spots tonight." It was clear the team did their homework, with Escobar fielding up-the-middle groundballs at the right time, and Ryan Roberts, playing short right field to lead off the 7th inning on the shift, ran hard to field a grounder and got rid of it quickly for the first out that could have been a gem.

With one out and Jose Molina on first base in the seventh (JoMo had two hits today!), Parker was lifted for Matt Cook -- who has an interesting delivery. He starts with the glove and hand together, drops his hand behind his right side with his wrist curled in, and then whips around with a high arm angle. Effective against tipping pitches, to say the least.

Here, Yunel Escobar worked a 3-2 count before Joe Maddon called a hit-and-run. Molina took off, but Escobar fouled the ball over the home dugout. The Rays tried again, this time with Molina sliding to break up the second baseman's throw, but c'mon. Molina got there seconds late, and the second base umpire was laughing as the A's turned the double play easily.

On the first out of the eighth inning, Joel Peralta worked a shallow fly to center field from the newly trimmed Josh Reddick. Ryan Roberts showed defensive prowess by getting an early jump, reading the pitch well and diving outstretched for the ball; his glove perfectly placed for the catch. Too bad Yunel was closer and never gave up pursuit. He caught the ball on behalf of Roberts as the second baseman did a penguin-like belly slide through the AstroTurf.

The Rays held their 1-0 lead into the ninth inning, and Joe Maddon handed the ball to Fernando Rodney, who was shifted toward third base again, but with his whole foot on the rubber. The biggest change from yesterday's 4-run close where he stood closer to first base was better control, but that's only one game's worth of confidence that shifting away from first is the best choice.

More acrobatics ensued in the ninth. Longoria and Joyce were both calling for a ball on a pop down the reft field line, with Escobar following Longo the whole way. All three men met by the field bullpen, Escobar slowing but Joyce not giving up. Joyce opted for the feet first slide and Longoria caught the ball, but unfortunately shouldered Joyce in the temple before he could drop to the ground. Joyce somersaulted backward but seemed unfazed.

With one out booked, Roberts gained negative press with an error -- a dropped fly ball to shallow right field to put Coco Crisp on first, but Rodney struck out John Jaso on high heat: a 96 MPH swinging-strike and a 98 MPH looking-strike on the final two pitches to John Jaso. Exuding control, Rodney worked change ups to finish Seth Smith.

This felt like a Rays win. And it felt good.

- Desmond Jennings earned a web gem with the first 8-unassisted double play in Rays history. Here's the GIF on fast forward, via cbs.com.

The last time a center fielder turned an unassisted DP was Mike Cameron in 2003. The last one to feature a catch by the center fielder and the second out at first base was Andy Van Slyke for the Astros on July 7, 1992.

- There are only four players in Major League Baseball that have gotten on base in every game this season: Pedroia, Markakis, Trumbo, and Longoria.

- Jim Joyce was essentially making it up when it came to the bottom half of the strike zone. 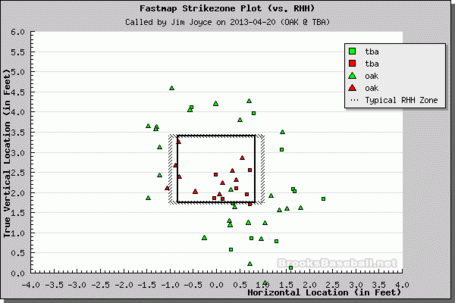 - Joe Maddon brought a DJ into the clubhouse for the game this evening, claiming the last few days had been too quiet. His name was DJ Fresh.

- Thoughts and prayers to the elderly gentleman who was struck by a foul ball and carried out on a stretcher in the last third of the ball game.