The Rays drew a weekend crowd of 66,680 fans as they swept the Oakland Athletics.

Share All sharing options for: The Rays Tank: Attendance problems non-existent through the first three series

The Rays swept the Athletics on Sunday afternoon in front of a crowd of 25,954 fans.

Tampa Bay sealed the three game series with an 8-1 victory over Oakland. The bats stayed hot and Roberto Hernandez earned his first win of the season. For a more in-depth look into Hernandez’s pitching, you can check out Steve’s recap of the game here.

The attendance this weekend at the Trop was great. The Rays drew a weekend crowd of 66,680 fans as they swept the best team in baseball (if wRC+ matters to you), and stand 22nd in the majors in attendance after nine games, drawing well over 200,000 fans.

Here's the full list for comparison as of this morning, courtesy ESPN's Attendance Report: 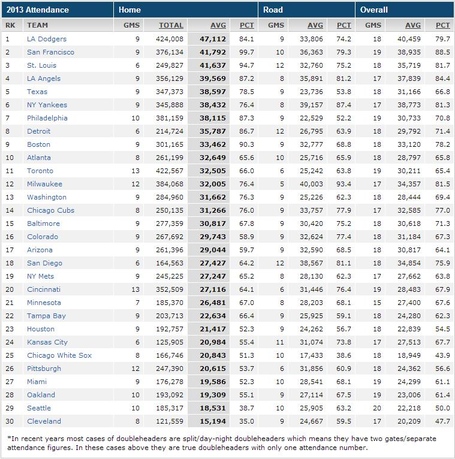 Now, what I noticed on Saturday and Sunday were thousands of little leaguers in the stands. I’m not sure how often the Rays will be doing promotions with local little league groups, but it definitely worked to fill the seats.

On Friday night, there were only 15,115 people at the game, and I think this number could have been a bit higher with a giveaway item. The Rays strayed away from the Friday night t-shirts this year, so we’ll see how that affects attendance figures throughout the season, but Saturday and Sunday drew a combined 51,565 fans to the stadium.

When the A’s came to town for a Thursday-Saturday series last August, the series attendance total was 48,713.

With the Yankees in town this week, we should see decent attendance figures for that series too, especially with Wednesday night being the Joe Maddon Gnome giveaway. Whether these boosted attendance numbers are doorprize gimmicks getting more fans to buy tickets or not has yet to be seen, and is also unlikely, but it plays a role.

Hopefully, this will be encouraging to our players and will shut the attendance critics up for a little while. (Editor's Note: Looking at you, Peter Gammons.)

On another note, Jose Molina’s trot to first which drives me nuts while watching. I know Molina's a big guy, but if you can steal a base, you can certainly run out grounders with a little more effort. I was impressed by Evan Longoria’s hustle during yesterday’s game, as I’m sure Joe Maddon was as well.

In the bottom of the first inning, Longoria hit a pop-up to shallow rightfield, which A’s rightfielder Josh Reddick misplayed and wound up dropping. In the meantime, Longoria continued to run it out and wound up on second base when all was said and done.

Then, in the bottom of the third, Longoria hit a fly ball down the right field line, which looked like it might land in foul territory. Reddick was unable to get to the ball in time as it landed right inside of the foul line. Longoria’s hustle was rewarded again, making it to second base in time. That’s the kind of effort I’d like to see from all of the players.

Matt Moore takes the mound against CC Sabathia today as the Rays host the Yankees at 7:10 PM.

- Evan Longoria presented renovations and a new Little League field to 300 children at the Belmont Heights complex in Tampa this weekend.

- It looks like Luke Scott is on track to start a rehab assignment on Tuesday, most likely with the Charlotte Stone Crabs.

- There was a magician on hand in the Rays clubhouse prior to Sunday’s game. Whatever works to get the players at ease for the game, right?

- Apparently the Rays had quite the defensive alignment during yesterday’s game, according to a Fox sports Graphic.

- and Astro was on hand for his own bobblehead day, which also coincided with Bark in the Park at the Trop yesterday!

- Drew Stubbs of the Cleveland Indians was able to hit a homerun into a bucket of popcorn, showering Astros’ right fielder, Rick Ankiel -- which sounds way more difficult than this "fan sacrifices popcorn for baseball" storyline everyone else has been throwing around.

- David Schoenfield gave a weekend wrap-up over on the SweetSpot blog at ESPN.com and named Jeremy Hellickson as the clutch performer of the weekend.

- MLB Fan Cave Dweller, Mina Park, takes a look at some of the best catches made by Rangers’ fan, Trent Williams, a.k.a. Greene Hill Kid.