The Rays welcome the Yankees into St. Petersburg for a four game series.

Share All sharing options for: Series Preview: Rays vs. Yankees

The suddenly hot Rays will host the 10-7 Yankees in a series that looks to redress all of the unearned advantages left handed batters have enjoyed for so much of their careers. On the Rays side you have the league's premier left handed pitcher and reigning Cy Young award winner in David Price, and the young lefty most apt to overtake him. On the other side you have C.C. Sabathia, who's long-tenured left-handed excellence Price should be hoping to emulate, and Andy Pettitte, who both refuses to retire for good or to pitch his age.

C.C. Sabathia has to hate playing the Rays. He owns a 6-12 record against Tampa Bay and has only won once in the Trop; tonight will be his ninth opportunity. There's actually a few new bits to report on C.C., starting with some extreme weight loss. Between October and January, Sabathia went into a regimented diet and exercise program to lose 20 pounds, and supposedly continued the trend into spring training. He's also missing some velocity.

Sabathia has worked a 3-1 record and a sub-3.00 ERA in his first four starts, but in his recent victory against Arizona his 4-seamer topped out at a mere 90 MPH. It was a worry in his first few stats, but after his poor performance last week, it's time to sound the alarm and shout, "Down periscope!" 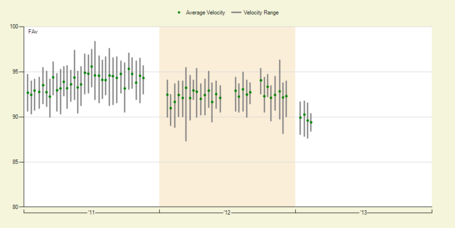 Sabathia has been a slow starter in terms of velocity, but his most recent struggles are profound. Bill Petti made this same worrisome observation a few weeks ago: 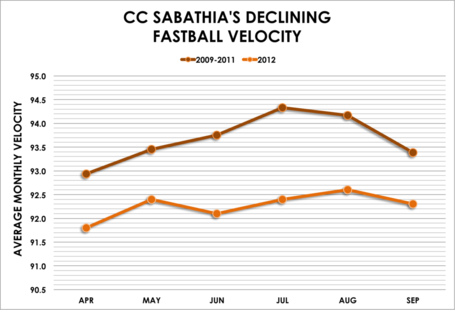 Lucky for CC, he doesn't live or die by his velocity, as his breaking balls and changeups are his bread-and-butter for whiffs. He may not be pushing 98 MPH, but his mix will stay the same.

CC sits on his four seam 45% of the time and when behind in the count, and backing it with a slider on two strikes or when he's ahead. Sabathia never uses his changeup against Lefties, and it has defied logic against Right handers. The changeup has lost velocity at a similar rate to his fastball, so the effect is relatively the same against batters. He's still getting swings and misses (27%!).

There's something strange going on with Phil Hughes's pitch mix. As a prospect, his calling card was his big mid-70s curve ball, but it never really translated into major league results. He's thrown it near 20% of the time every season, and it's graded out as a below average pitch by linear weights. This year, he's lowered that number down to around 10%, and he's throwing an 80 mph slider 20% of the time. The results have been good. His curve now grades out as a positive pitch, and the slider is holding it's own, even with the high usage, too. This has been obscured by the fact that batters have been hammering his fastball, so he still looks like the same average pitcher. Now maybe the slider makes his fastball more hitable, or maybe this is all small sample size nonsense and none of it means anything, but I think Hughes is onto something. If his fastball results normalize, watch out.

Andy Pettitte threw a cutter before the cutter was cool, and it's a big reason why he's been such a dependable starter against opposite-handed hitters. After a year of retirement in 2011, Pettitte worked himself back into shape for 2012, and pitched half a season at a higher level than he ever had since 2006 (according to FIP-). So far this season, it's been more of the same good control, but with very few strikeouts (small sample size). I expect him to dominate the Rays, striking out at least 10 in five innings of work.

The Yankee have been hit hard by the injury bug. Derek Jeter, Mark Texeira, Alex Rodriguez, and Curtis Granderson are all on the disabled list, leaving Robinson Cano and a bunch of guys who are not True Yanks. Of those imposters, Kevin Youkilis is by far the most dangerous, especially to the lefties, but Brendan Boesch is decent against lefties, and Travis Hafner should scare everyone (and terrify Cobb).

The graph below shows projections based on regressed platoon splits and the ZiPS projection system. Use the drop-down menu to choose which matchup you wish to view.