A few thoughts on Matt Moore's progress this year and areas he needs to improve in.

On Monday night, Matt Moore resumed his fabulous outset to the year with an eight inning gem against the Yankees, allowing only one run on two hits. So far, this season has served as a breakout year for Moore, with his evolution into one of the better pitchers in the American League on full display. Here are a few of my observations about his season thus far.

So what is Matt Moore's issue? Against left handed batters, he goes to his fastball and curveball a combined 85% of the time. His curveball is a fairly neutral pitch, inducing poor swings and weak contact from hitters of both sides. However, Matt Moore's fastball does not produce nearly as many whiffs versus left hand hitters as it does versus to right handed hitters. His whiff/swing rate is 16.16% versus lefties and 27.52% against righties. For whatever reason, left handed hitters find no issue handling his fastball. It could be a location issue, it could be a lack of deception, or it could be another reason that is not clear. Either way, if Matt Moore wants to continue to progress, establishing his fastball against left handed batters is key.

During his last start, I heard the Rays radio guys bring up an interesting point: batters rarely swing when ahead in the count versus Matt Moore. Batters are only swinging 38.3% of the time versus Matt Moore compared to the league rate of 45.4%. This is despite Moore throwing pitches in the zone 44.8% of the time compared to a league rate of 46.5%. So, in other words, despite Moore throwing pitches in the zone close to a league average rate, hitters are not offering. This helps explain his high walk and strikeout totals along with his extremely low hit rate. If batters do not swing as often and the pitcher is not absolutely pounding the the zone with strikes, walk rates will be higher. At the same time, more counts will get to two strikes, which leads to weak swings and whiffs, reasons for the low hit totals and the strikeouts. 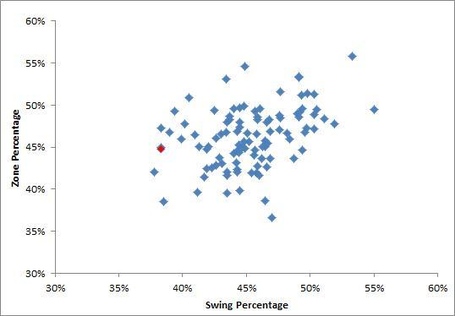 Data points are qualified starting pitchers in MLB this year. The red data point on the far left is Matt Moore.

In 26 innings this year, Matt Moore has allowed only 10 hits. Of those ten hits, seven were singles, one was a double, and two were home runs. Matt Moore's ground ball rate, which was very low last year, has soared to 47.4%, above league average. Similarly, his line drive rate has plummeted to 10.5%, a little over nine percent lower than last year. Additionally, he is whiffing batters at the fifth highest rate in the American League. Simply put, batters are not hitting Moore's pitches with authority. Batters may be taking a free pass at a relatively high rate, but those walks matter little if he keeps them manageable and continues to deaden hitter's bats. Walks are bad because they take pitches and put on base runners. If hitters do not drive them in though, then they are more tolerable.

There are still areas of Matt Moore's game that need work and serve as reminders of his youth and inexperience. Lapses in focus lead to easy four pitch walks. His fastball velocity, while improving, is still not at its normal levels. His pitching strategy against left handed hitters needs work. But despite all of these flaws, Matt Moore is a very talented and effective pitcher and, so far this year, he has taken a step in the right direction.