The Rays Tank: Starts with a T, Rhymes with Pom

Rays' players take to Twitter to voice their opinion on Umpire Tom Hallion.

Share All sharing options for: The Rays Tank: Starts with a T, Rhymes with Pom

Quite the scene unfolded yesterday at the end of the seventh inning in Chicago as the Rays defeated the White Sox 8-3. David Price was cruising, allowing only two baserunners in innings four through seven after giving up three runs in the first three innings.

Dewayne Wise was up to bat, already 0-for-2 on the day with a ground out and lineout, and quickly fell behind in the count 1-2. Price's fourth pitch looked to be right over the plate, for what would've been strike three. 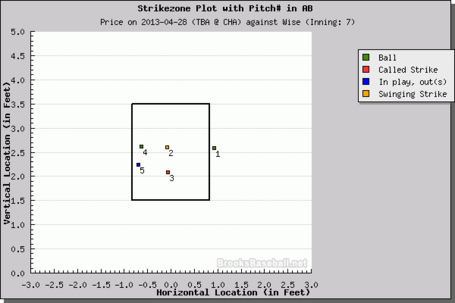 Instead, Home Plate Umpire Tom Hallion called the pitch ball two. Price shook it off and got Wise to hit a comebacker which ended the inning. Following the play, Price was visibly upset but marched straight to the dugout. The video below clearly shows that something caught Price's attention in the direction of homeplate, causing him to react as he reached the dugout.

As Price told reporters after the game, Hallion yelled at him to "throw the ball over the f-ing plate" and that's when the Rays dugout reacted. After all was said and done, Jeremy Hellickson was ejected from the bench. Per Marc Topkin, Hallion told reporters after the game, "Hellickson was told to knock it off, him and Moore were at the dugout rail and I told them to knock it off and he thought it was okay for him to have his final comment, at which time he was ejected." Full text of Hallion's comments can be found here and more dialogue from the players, including Hellickson stating that Alex Cobb would pick up any of his fines, can be found here thanks to Marc Topkin. 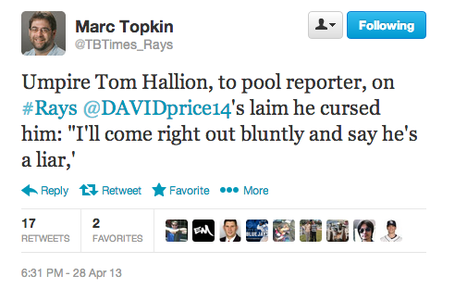 The Rays took to twitter after the game to express their thoughts regarding the situation. 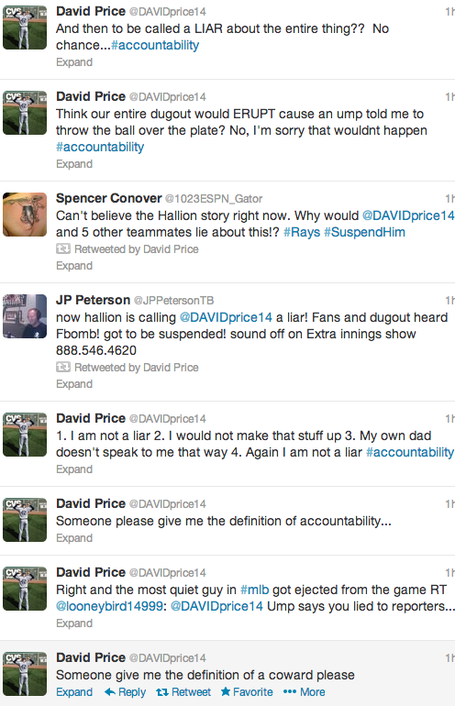 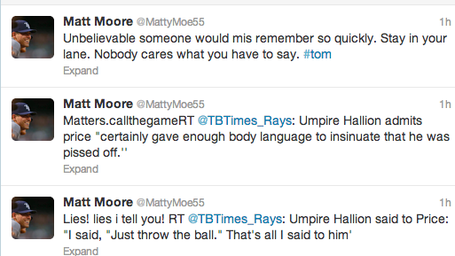 It will be interesting to see if any fines are handed out over the players tweets due to the MLB Social Media Policy, which is outlined here. Last season, Indians pitcher Chris Perez was fined $750 for an inappropriate tweet in which he said, "You hit us, we hit you. Period." Additionally, former Marlins skipper, Ozzie Guillen, was suspended by the team last year for his tweets about Fidel Castro. Guillen was also fined $20,000 by MLB on a separate occasion while coaching the White Sox in 2011, when he tweeted after an ejection, but before the game had ended.

This also wasn't the first time that umpire Tom Hallion has been involved in controversy. Per Baseball Reference, Hallion was once ejected in 1999 in which he bumped both a Rockies player and coach after the Rockies pitcher had argued a check-swing call with the third base umpire. Hallion was suspended three games for the incident. Later that year, Hallion and 56 other umpires resigned as part of a strategy to raise umpires salaries. MLB called the bluff and accepted the resignations. Hallion would not return as an umpire with MLB until 2004.

The Rays have an off day today as they travel to Kansas City for a three game series against the Royals. Alex Cobb will take the mound against James Shields on Tuesday. Hoping to return to action on Tuesday are Luke Scott, Jose Molina and Yunel Escobar.

-The Detroit Tigers triple-A affiliate, the Toledo MudHens, will be celebrating Star Wars weekend this Saturday and Sunday. Saturday will be "May the Fourth Be With You" night and Sunday will be "Revenge of the Fifth." They will also wear Chewbacca-themed uniforms and concessions will feature items such as "Darth Chocolate Brownie Sundaes." YUM!

-Scientists in Japan have created a robot which can adapt to pitches and know exactly when to swing at the ball.

-David Schoenfield of ESPN.com grades Matt Moore's first five starts an "A-" while giving the Red Sox an "A+" for their red hot start in April.

-Former Rays player Drew Sutton was robbed of a homerun as Jeremy Hermida of the Indians triple-A affiliate Columbus Clippers made an incredible catch over the right field wall.

-Here's a look at some of Joe Maddon's strangest moments with the Tampa Bay Rays.