The Problem with Assumptions

The Rays have an attendance problem, and they should move cities, because Kenny Loggins?

Share All sharing options for: The Problem with Assumptions

In case anyone was willfully unaware, you should know that the Rays are a popular baseball team. I don't care how often Peter Gammons or some ESPN pundit wants to take a jab at the Rays attendance figures, the team is quite popular in the Bay Area.

The Rays ranked fifth in television ratings in 2010, and after a slump in 2011 (and an Evan Longoria injury), rebounded strong in 2012. Considering this is a sport driven by television dollars, in a state where you drive to go anywhere, in an area of the state that is separated by large bodies of water, its understandable that the Rays would have "attendance problems," but the team is not desperate for fans.

But then there's the Assuming Yankees Fan. Whose team has more fans in half an hour's stroll than the Rays do in a 90 minute drive. Whose only thoughts driving through Tampa probably include how long it takes to get to Tropicana field, noticing George Steinbrenner's name on exit signs from 275, and wondering about the location of Derek Jeter's new mansion (Davis Island).

Why would an Assuming Yankees Fan think the Rays have an attendance problem?

He takes his seat and notices a paltry attendance on a Tuesday night for the Yankees game. Why?* Maybe it's because Rays fans know when they do show up, it's overcrowded with boisterous, condescending retired snowbirds that fill the stadium. In recent years their population has been dwindling—maybe they're all dying out?—so the stadium looks quite empty at only half full.

*Because real Rays fans hate the Yankees. We could start there.

Or maybe Assuming Yankees Fan only watches on TV. Then there's the camera angle. The one that looks at a pitcher's face from the dugout and only sees the far distant corner of the field.

For example, this is Phil Hughes: 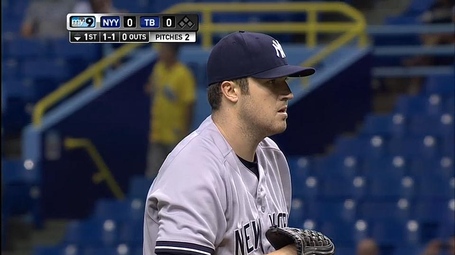 This is what's behind Phil Hughes: 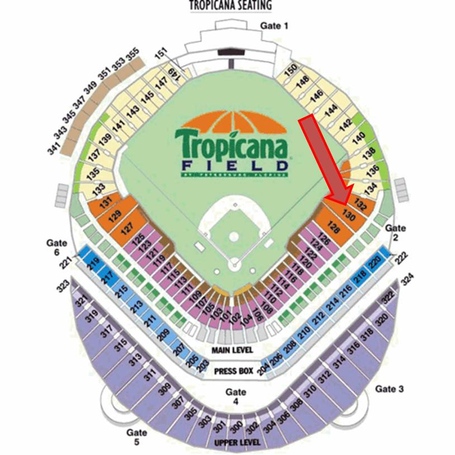 Forget the challenges the Rays face, such as a difficult location. Such as a state economy that tanked harder during The Recession than almost anywhere else in the U.S., and has only recently started to show signs of bouncing back, sort of. And let's forget the fact that the Rays are 22nd in Major League attendance, slightly trailing Cincinnati and, uh, the NEW YORK Mets in average home game attendance figures:

Nope. Not listening. Assuming Yankees Fan knows what attendance looks like, and that is not it. Slap a qualifier on all Tampa Bay Rays thoughts and ideas: "Attendance problem."

Do you know this guy? I do.

Enter Steven Goldman, of our neighbor site Pinstriped Bible. He's a bit of a roamer and writes high-quality work for the parent blog at SB Nation—like his long-form piece on Branch Rickey and Jackie Robinson, which I highly recommend—but unfortunately, after his most recent piece, we're going to have to call him out on this: he's an Assuming Yankees Fan.

Apparently Mr. Goldman noticed that Kenny Loggins is a featured artist in the Rays Summer Concert Series this year. The Series is a tradition dating back to the 2008 season, an opportunity for family and friends to enjoy music after the game, and often runs the gamut of performers and styles. This year features Martina McBride, Carly Rae Jepsen, One Republic, and yes, Kenny Loggins—appealing to country fans, teenagers, young adults, and then 80's fans.

As the Rays' attendance figures typically attest, baseball isn't really a big draw at Tropicana Field. No wonder then, that the "Rays Summer Concert Series" has been created to provide that extra bang for the game-goer's buck -- buy a ticket, get to see the Rays play the Padres, and once that preliminary is out the way, catch some tunes! It's just one more way to get those recalcitrant residents of Tampa to cross the bridge and slum it in St. Pete.

Okay, stop. This is his introduction.

Either Mr. Goldman is intentionally ignorant that the Rays attendance is doing comparatively well this year, he's being tongue-in-cheek about the fact the Rays have not always scored well in attendance figures, or he thinks he's funny. Considering this is a publication on our parent site of SB Nation, I'll assume its one of the latter two options, and let's give him a chance.

As I live in the Northeast I would be blissfully unaware of all this had the Yankees not journeyed south to play the Rays last week. I watched all three games, 27 innings-worth of baseball totaling an even 200 plate appearances and 757 pitches. Behind home plate, for every single one of them, was a sign: KENNY LOGGINS MAY 11.

So we've established that he was "blissfully unaware,"** but now know he's seen a Kenny Loggins sign multiple times. The next paragraph is a series of jokes about how irrelevant Loggins has become in 2013, I'll save you the pain.

**What exactly is there to be "blissfully unaware" of? That the Rays have "attendance problems?" This isn't exactly a new article idea here, but that might explain why he thought it was good to write. He had just never seen one of the other 100+ identical versions in national media. That the Rays have a concert series? Seems like a strange reason to be blissful, but if Mr. Goldman can be so easily made happy, good for him. That there's baseball played below the Mason-Dixon Line? That sounds about right. Hey Selig, I know a way to fix that!

After quoting some lyrics, posting a YouTube video and links to his songs, and adding a few paragraphs of thoughts on Mr. Loggins—including the quip, "I'm not trying to denigrate Kenny Loggins as an artist at all."—Mr. Goldman continues to comment on the juxtaposition of baseball and 80's classics:

[Loggins] seems to be having a good time entertaining people with his brand of catchy, good-time music. There's a place for that, and maybe that place is in Florida just after Fernando Rodney has blown a save. If ever an oppressed people needed uplift, it would be then.

No, this isn't adding up. Goldman, what's your problem?

As a baseball fan, it's embarrassing when the tail wags the dog. The Padres aren't exactly a big road draw, the Rays aren't a big home draw, and so any bump on May 11 is going to be purely due to Mr. Loggins' appearance.

Let's poke a few holes here. First, the Padres have actually had higher attendance in 12 road games than the Yankees in 2013. You should reconsider what is and isn't a joke here:

Second, with the way television contracts are these days, butts in seats are not the most important source of revenue stream in Major League Baseball. An increased attendance would be great, but why again should we actually care about the Rays' attendance? And more specifically, why do you care? Is it that you care if the Rays franchise is doing well, or is this just an excuse to poke fun at the Tampa Bay area? We have become quite the pincushion in recent years for writers looking to make a deadline.

Third, why denigrate a successful and creative marketing idea? Since it started a few years ago, the Summer Concert Series at the Trop is an appreciated tradition for Rays fans and families in the Bay area. At this point, it will be there when the Rays draw more fans than the Dodgers or less fans than the Astros, in Hillsborough or Pinellas County. It's not a gimmick*.

*Also, what exactly is wrong with gimmicks in general? If gimmicks are bad for baseball, we should be talking about the White Sox and the fireworks they set off after every homer. But wait, no, creative marketing is okay—and only okay, it seems—when it was started by baseball-legend Bill Veeck.

The long and short of it, as Steven Goldman discovers from pondering why Kenny Loggins is playing at The Trop, is to just let the Rays move to a new city. TO A NEW CITY. You know, to fix attendance.

Building new ballparks is a very expensive way to test the worthiness of a market, which is why it might make more sense for everyone involved to let the Rays move on -- even if that means St. Petersburg giving up its ironclad lease, which prevents the Rays from even talking about moving. Better to endure the short-term pain of losing a team than the long-term pain of saddling taxpayers with long-term debt that really doesn't accomplish anything.

He means "move on" to Tampa, right? RIGHT?

Until that day comes to pass -- and it will, even if the Rays have to declare bankruptcy to get out from under the lease -- we'll have a lot more KENNY LOGGINS MAY 11.

Oh good, so this is still about Kenny Loggins. But also attendance, and bankruptcy, and the viability of the state of Florida for Major League Baseball.

But wait, don't other teams have concert events on game days? You bet! The Indians, Mets, Braves, Angels, Rockies, and Reds, among others. Yes, Goldman thought of that too.

I know every team and ballpark does this to squeeze in extra revenue on off days, but rarely does it feel so central to their efforts. If the Red Sox or the Tigers have a show on May 11, it's ancillary. They're going to play a game the next day and it's going to draw well. The Rays have no choice but to cut footloose.

Another 80's joke brings it all full circle.

So what are we writing about again? The feeling a New Yorker gets when he looks out on one of the provinces? It all seems to boil down to the simple equation that: Kenny Loggins = attendance problems = move cities.

Mr. Goldman, please kindly don't write about the Tampa Bay Rays attendance again until you can take a more fair-handed approach to the topic. I mean, c'mon, Jonny Gomes understands this area better:

"Let it be known, everyone was watching,'' he said. "You go to any restaurant, you go to any bar, you go anywhere, everyone knows everything (about the Rays). But they're not going to the stadium.''

"This is like, retired, kicked-back, watch-the-game in your front yard with a TV,'' he said. "This isn't, go inside. This is an outside joint.''

Every year, Tampa Bay fans have to endure article after article slamming the area for its poor attendance, with the not-so-subtle undertone that fans down here just don't care. Well, we do care. We do exist. And we don't appreciate our city—our fans—our team being slapped around like this.

The Staff at DRaysBay